Migrants on stranded rescue ship prepare for voyage to Spain 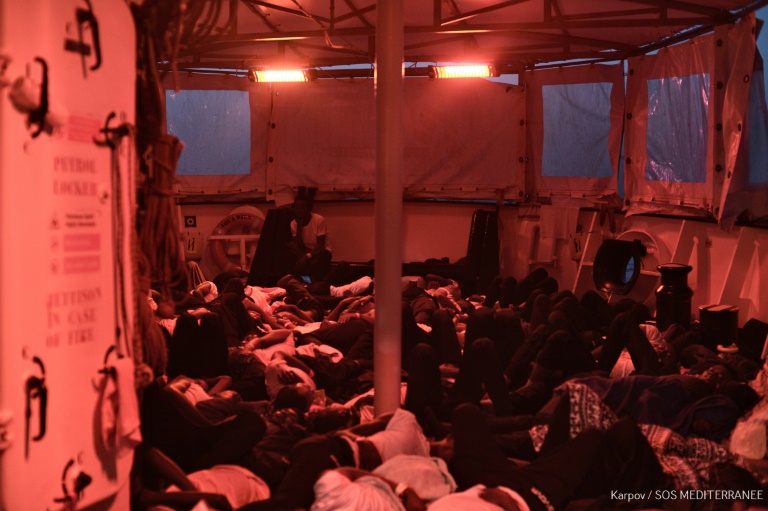 With 629 migrants onboard, conditions on the Aquarius, which was built to carry 500, are extremely cramped (Photo: AFP)

Hundreds of migrants stranded for days on an aid ship in the Mediterranean because Italy and Malta refused to take them in were being transferred to other boats Tuesday ahead of their journey to Spain.

Rescuers warned of deteriorating weather conditions facing the 629 people -- including pregnant women and scores of children -- who have been crammed on the Aquarius vessel since being plucked from the sea off the Libyan coast at the weekend.

With food and drink running short, their plight could last another three or four more days before they are finally able to land in Spain, according to the French charity SOS Mediterranee which operates the ship.

Spain stepped in to help after Italy -- which has been on the front line of the migration crisis in Europe -- and Malta refused to allow the Aquarius to land despite strong pressure from the international community.

SOS said over half those on board would be transferred to two official Italian vessels before all three boats make the 1,500 kilometre journey to the Spanish port of Valencia from the Aquarius's current position between Sicily and Malta.

Doctors from another French charity, MSF (Doctors without Borders), are helping treat the migrants, who include seven pregnant women, 11 young children and 123 unaccompanied minors.

Spain's new Prime Minister Pedro Sanchez had offered the boat safe harbour, saying there was a moral "obligation to help to avoid a humanitarian catastrophe".

Anelise Borges, a Euronews correspondent on the Aquarius, told AFP that weather forecasts were predicting waves as high as two metres (seven feet).

"Even if the conditions are OK, and we go only with 100 people aboard it could take three, three-and-a-half days to get to Spain," Borges added.

That would mean the migrants will have been at sea for almost a week by the time they arrive in Valencia.

Borges said they had been at sea for 20-30 hours before being rescued, and nerves were fraught.

"Yesterday they told the people on board that there could be a possibility that we would not be going to Italy but that we didn't know yet where we were going to go and obviously people got terrified," she said.

"A man threatened to throw himself off the boat, saying he didn’t want to go back to Libya, for some people the prosect of going back was really really scary."

The migrants had been left in limbo as Italian Interior Minister Matteo Salvini and Maltese Prime Minister Joseph Muscat argued over who was responsible for taking in the boat.

Salvini said he would go to Libya -- the launchpad for many migrants and refugees fleeing war and poverty in Africa and the Middle East -- by the end of the month.

"This situation needs to be resolved on the African continent," said Salvini, whose new populist government has vowed a tougher stance on immigration.

He wants to cut the number of arrivals to Italy -- something already achieved by his predecessor thanks to a deal struck with Libyan authorities -- while accelerating the expulsion of "illegals".

Salvini has repeatedly accused charities of working with human traffickers but said Italy would not stop rescuing migrant boats itself.

"We have put a stop to the NGOs. The coastguard and navy can continue to save lives, but other countries need to keep giving us a hand."

He noted that an Italian coastguard ship was expected to dock in Sicily in the coming hours carrying some 937 migrants, also rescued off Libya.

SOS Mediterranee insisted it would continue its rescue activities once the Aquarius had returned from Spain.

Italy has come under fire from its European allies over its stance, with French President Emmanuel Macron blasting its "irresponsibility".

Ximo Puig, president of the Valencia region, also had strong words for Rome.

"Turning this into a political weapon is despicable... it is clear that Europe must act more wisely, but we cannot let these people die at sea."

But he warned: "I fear a major tragedy if states start refusing to accept rescued migrants as was threatened."

Under EU rules, migrants must apply for asylum in the European country where they first arrive.

That has put pressure on Italy and Greece, the entry points for the hundreds of thousands of people fleeing war and poverty at home to seek a new life in Europe.

EU leaders in December set an end-June deadline for an overhaul of rules to create a permanent mechanism to deal with migrants.