Migrants weigh whether to stay in Mexico or trek to US 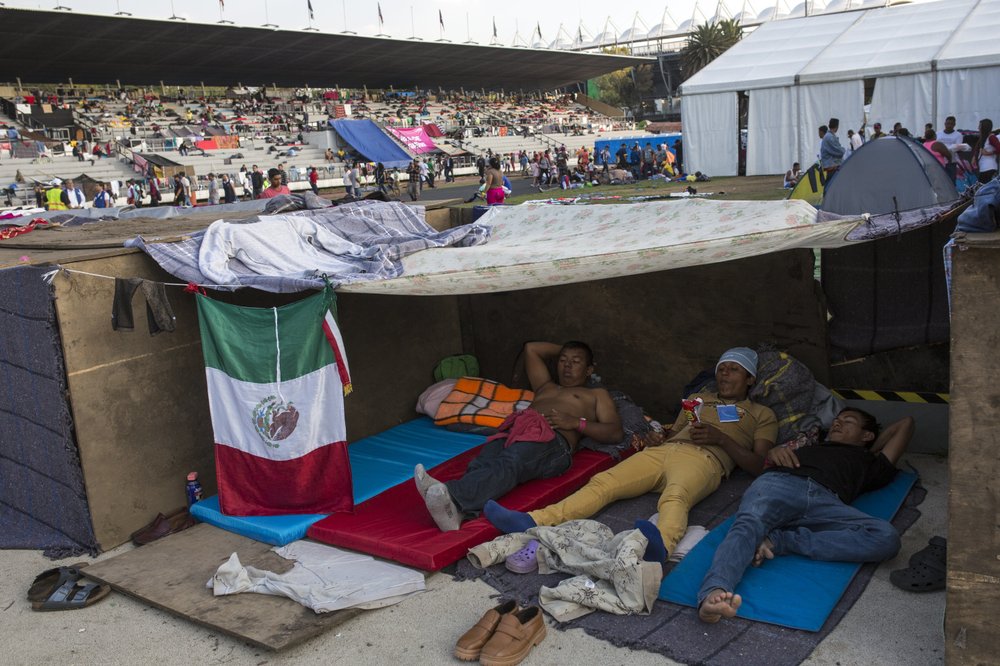 Central American migrants rest at the Jesus Martinez stadium in Mexico City, Tuesday, Nov. 6, 2018. Humanitarian aid converged around the stadium in Mexico City where thousands of Central American migrants winding their way toward the United States were resting Tuesday after an arduous trek that has taken them through three countries in three weeks. (Photo: AP)

Central American migrants on Wednesday continued to straggle in for a rest stop at a Mexico City stadium, where about 4,500 continue to weigh offers to stay in Mexico against the desire of many to reach the US border.

Mexico City officials said they expected as many as 1,000 more might arrive at the Jesus Martinez stadium as lagging members of the caravan trail in, their journeys slowed by difficulties in getting rides or by hopping aboard trucks that veered off their route.

Angel Eduardo Cubas of La Ceiba, Honduras, reached the shelter early Wednesday after being split off from the caravan. Like many migrants he had to find his way back to the relative safety of the caravan in an unfamiliar country, with no money.

“There were a lot of people who got dropped off somewhere else,” said Cubas, who at one point lost his two children, 2 and 6, before finding them again. “It was ugly, going around looking” for his kids, the 28-year-old father said.

Members of the caravans of migrants, which President Donald Trump made a central issue in US midterm elections, declined to take an immediate decision Tuesday night on whether to stay in Mexico or continue north, opting to remain in the capital at least a couple more days.

“Nobody is in more of a hurry than me to get going (to the US border), but we have to go all together,” said Sara Rodriguez of Colon, Honduras.

Rodriguez, 34, fled her country with her 16-year-old daughter Emily, after the girl began to draw unwanted attention from a drug trafficker who just got of prison and pledged to go after her. Rodriguez left her 7-year-old son with her husband in Honduras. “Even though it hurts to leave my son ... I had to protect her,” Rodriguez said, weeping.

Mexico has offered refuge, asylum or work visas to the migrants and the government said 2,697 temporary visas had been issued to individuals and families to cover them while they wait for the 45-day application process for a more permanent status.

Rina Valenzuela, who is from El Salvador, listened attentively to aid workers from the nonprofit Institute for Women in Migration as they explained the difficulties of applying for and securing asylum in the US Valenzuela decided she would better off applying for refuge in Mexico.

“Why go fight there, with as much effort and as much suffering as we have gone through, just for them to turn me back? Well, no,” she said.

Hundreds of city employees and even more volunteers helped sort donations and direct migrants toward food, water, diapers and other basics. Migrants searched through piles of donated clothes, grabbed boxes of milk for children and lined up to make quick calls home at a stand set up by the Red Cross.

Employees from the capital’s human rights commission registered new arrivals with biographical data— such as age and country of origin— and placed yellow bracelets on wrists to keep count of the growing crowd.

Maria Yesenia Perez, 41, said there was no space in the stadium when she and her 8-year-old daughter arrived Tuesday night, so the two from Honduras slept on the grass outside. Migrants pitched tents in the parking lot and constructed makeshift shelters from plywood covered with blankets and tarps. Forty portable toilets were scattered across the grass.

Several smaller groups were trailing hundreds of miles to the south; officials estimated about 7,000 in all were in the country in the caravans.

Trump portrayed the caravan as a major threat, though such caravans have sprung up regularly over the years and largely passed unnoticed.

Former Honduran lawmaker Bartolo Fuentes, who denies accusations he started the caravan, described it as a natural response “to a situation more terrible than war.” He said about 300 to 400 Hondurans leave their country on an average day.

“What do we have here then? The accumulation of 20 days” of normal emigration, he said.