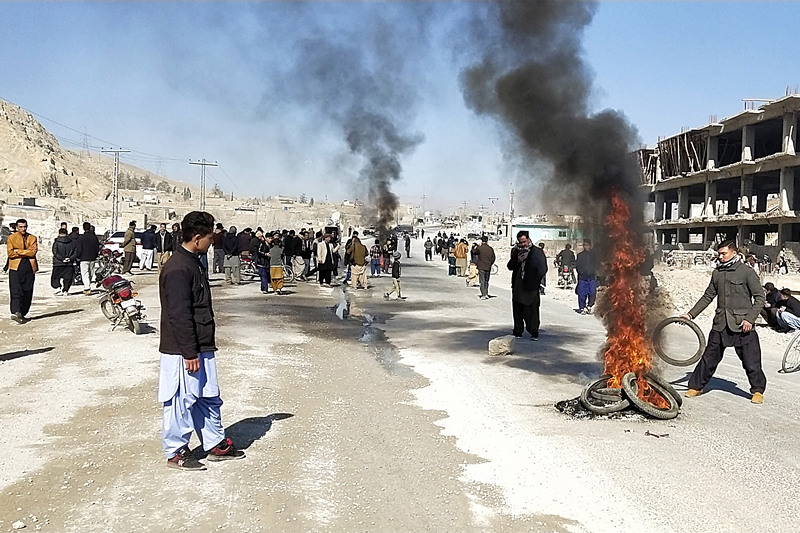 Members of Shiite Hazara community burn tyres during a protest after the killing of 11 workers of their community, in Quetta on January 3, 2021. (Photo: AFP)

He said that the militants on late Saturday handcuffed and tied the feet of the laborers before shooting a few of them from a close range, and slaying others with sharp-edged knives.

"Initially the investigation indicated that the killed laborers may be from other provinces and were killed on the basis of nationalism, but the final probe revealed that the victims were from ethnic Hazara community, further investigation is being made to check if there were some sectarian motives behind the target killing of the armless laborers."

The victims belonged to the provincial capital of Quetta and their bodies were shifted to a hospital in Bolan from where they will be moved to Quetta to be handed over to relatives, he said.

Earlier, Murad Kasi, deputy commissioner of Bolan, told local media that the militants shot the laborers after abducting them from the mine where they were working.

No group or individual has claimed the attack yet.

Pakistani Prime Minister Imran Khan condemned the attack, calling it "another cowardly inhumane act of terrorism," adding that he has asked the security forces to use all resources to apprehend the killers and bring them to justice.

Khan also said that the government will take care of the families of the victims.

Hazara community took to streets in Quetta to protest against the killing of the laborers, and also staged a sit-in at one of the main roads of the city.