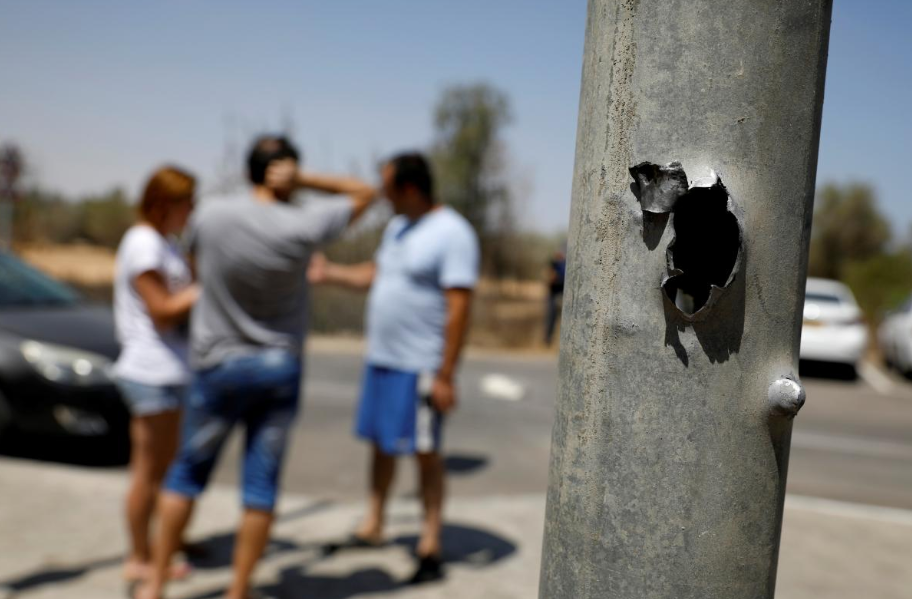 People stand next to a pole damaged by a rocket fired from the Gaza Strip that landed near it, in a Kibbutz on the Israeli side of the Israeli-Gaza border, June 20, 2018 (Photo: Reuters)

Several dozen rockets and mortar bombs launched at Israel by Palestinians in Gaza, and Israeli air strikes on the enclave’s dominant Hamas militant group, raised the heat along the border on Wednesday.

Despite the biggest flare-up in weeks in the area, no deaths were reported. But pledges by Israel and Palestinian militants to continue to respond to any attacks against them held the potential for broader conflict.

“I don’t intend to detail the actions we plan on Gaza,” Israeli Prime Minister Benjamin Netanyahu said in a speech to graduating military officers that was aired on national radio.

He added: “Force will be stepped up as much as required. We are prepared for every eventuality, and our enemies would do well to understand that - right now.”

The Israeli military said Hamas fired about 45 rockets and mortar bombs at southern Israel overnight, and that Israeli aircraft attacked 25 targets belonging to the group in response.

A graphic distributed by the military showed 21 impact sites in Israeli territory and it released a photo of one crater just outside a school. It said seven projectiles were intercepted, at least three fell short inside Gaza and that it was not immediately able to account for the others.

A Hamas spokesman said that, as part of a policy of “bombardment for bombardment”, the barrages were retaliation for an earlier Israeli air strike.

The Israeli military said that in that raid, it attacked three targets in a Hamas compound, calling it a response to the repeated launching of incendiary kites that have burned large tracts of parched farm fields and woodland in southern Israel.

Two Hamas security men were lightly hurt in one of the air raids, residents said. Sirens sounded throughout the night in parts of Israel’s south, sending residents into fortified rooms that are mandatory in homes.

No Israeli casualties were reported.

Israel has accused Hamas of stoking violence in an attempt to deflect domestic opinion from Gaza’s energy shortages and faltering economy.

Israel maintains a naval blockade of Gaza and tight restrictions on the movement of people and goods at its land borders. Egypt has also kept its own Gaza frontier largely closed. Both countries cite security concerns for the measures, which have deepened economic hardship.

At least 127 Palestinians have been killed by Israeli troops during mass demonstrations along the Gaza border since March 30.

Protesters are demanding a right of return to what is now Israel for those who fled or were forced to flee their homes in the war around its creation in 1948, and for millions of their descendants. Israel rules that out as demographic suicide.

Israel’s deadly tactics in confronting the weekly Friday protests have drawn international condemnation. But support has come from its main ally, the United States, which like Israel, has cast blame on Hamas.