WORLD Military fans out across Pakistan ahead of election

Military fans out across Pakistan ahead of election 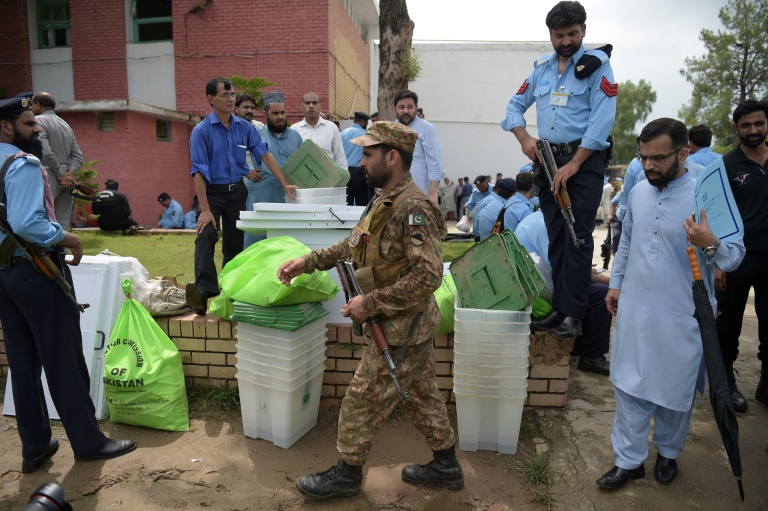 Hundreds of thousands of soldiers have been deployed for security ahead of Pakistan's July 25 national election (Photo: AFP)

Pakistan's military fanned out across the country ahead of Wednesday's election, deploying hundreds of thousands of troops to oversee polling stations in a short but acrimonious contest that analysts say is still "up for grabs".

"With the grace of God, we want to see a peaceful election tomorrow," Election Commission secretary Babar Yaqoob told media, but warned that there were security challenges and threats.

The military has stationed over 370,000 personnel nationwide to ensure the vote goes smoothly -- the largest such deployment in Pakistan's history on an election day. It has said the soldiers will work with local law enforcement to ensure "a safe and secure environment" for voting.

An additional 450,000 police have also been assigned to provide security, according to election officials.

The mammoth deployment coupled with a recent decision by election authorities to grant military officers broad powers inside polling centres has stirred fears of possible manipulation.

The military presence is just the latest controversy in a bitter campaign season that has seen accusations of "pre-poll rigging", the expansion of hardline religious parties, and a string of bloody militant attacks that have killed more than 180 people, including three candidates.

Despite the controversies and bloodshed, political parties continued to criss-cross the country in the final days before the polls, holding dozens of rallies in key battleground areas.

At a distribution centre in Lahore, election workers complained of general discord and delays in the delivery of ballot boxes.

"I have been performing election duty for the past 22 years and I have never seen such a disorganised election my whole life," said one worker who asked to remain anonymous, adding that the troops overseeing the process had done little to help.

A day before the polls, voters were largely split in Lahore, the capital of Punjab -- Pakistan's most populous province and long a PML-N stronghold that is now being fiercely challenged by Khan's PTI.

"I am supporting Imran Khan because he is the best choice for Pakistan. We should give him a chance," said Muhammad Wasim, 32, pointing to what he described as the success Khan's party has had in governing northwestern Khyber-Pakhtunkhwa province.

Others cited the improvements in infrastructure under the PML-N in the sprawling eastern city, vowing to stick by the party hit by several corruption convictions ahead of the election.

"They have served the masses, they have put an end to... (power cuts) and given us better facilities including roads, transport and education," said shopkeeper Muhammad Nawaz, 45.

Political parties held their final rallies Monday night -- before campaigning was suspended -- in a last-ditch attempt to energise voters.

"I am giving this task to all of you: wake up early on the 25th and cast your vote," Khan told thousands of PTI faithful in Lahore.

"Despite all the odds, PML-N is winning the July 25 polls," he was quoted as saying by Pakistani media.

The PML-N has accused the powerful military, the country's most powerful institution, of manipulating candidates and the media ahead of the vote in a bid to push out the party and install a pliant government, with Khan seen as the likely beneficiary.

At a PML-N rally in the military garrison city of Rawalpindi, anger simmered over what participants said was engineering by "the establishment" -- referring to the military.

Some vowed to take to the streets if directed by their leaders.

"After the election, we will fight," said PML-N supporter Aftab Anjum, 67.