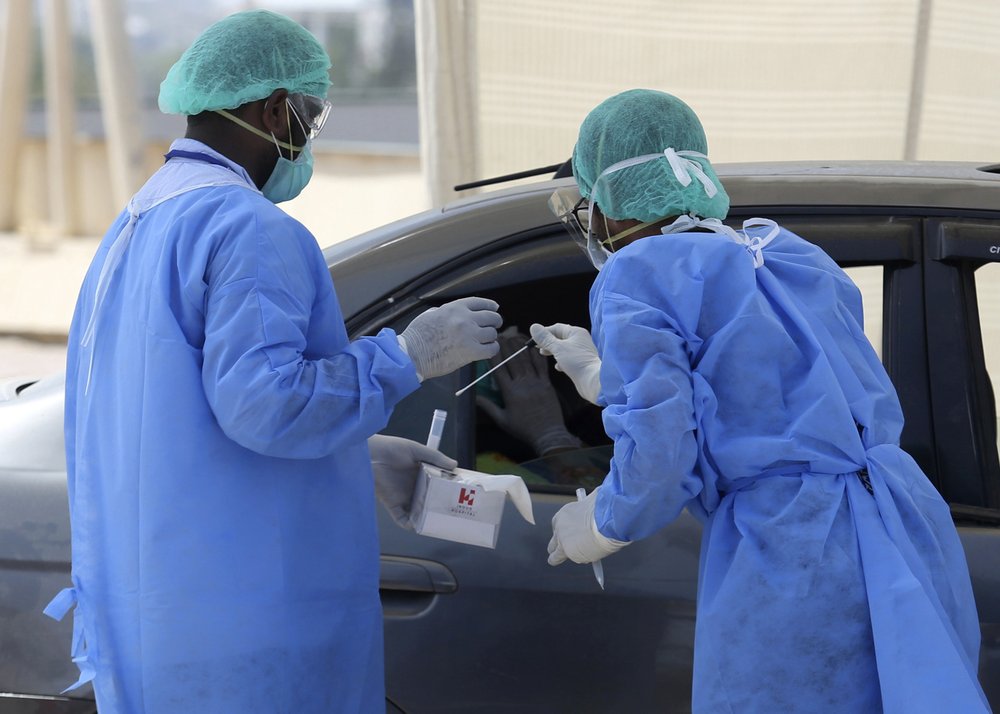 Health workers collect a specimen at a drive-thru testing and screening facility for the coronavirus, in Karachi, Pakistan, Monday, April 6, 2020. (Photo: AP)

Pakistan’s military promised Tuesday that dozens of doctors who were briefly jailed for protesting a lack of protective equipment needed to treat the growing number of coronavirus cases will get the equipment they need.

The 47 doctors protested in Quetta, the capital of southwestern Baluchistan province, on Monday, when they were detained. They were released later the same day, according to provincial spokesman Liaquat Shahwani.

An army statement Tuesday said the “emergency supplies of medical equipment, including PPE (Personal Protective Equipment) are being dispatched to Quetta.”

However, some of the doctors said they were mistreated by police and that some of their colleagues were beaten. The physicians declined to give their names, fearing reprisals.

Two doctors have died after contracting the new virus in Pakistan, which has recorded 4,004 cases and 54 deaths. Many of the cases have been traced to pilgrims returning from neighboring Iran. Pakistani authorities have imposed a countrywide lockdown until April 14.

In Iran, authorities struggling to battle the virus announced Tuesday they would expand testing to asymptomatic people, but didn’t say how many test kits they have available or provide other details.

Iran’s Health Minister Saeed Namaki said that with active screening of such cases, there are expectations the virus and COVID-19, the illness it causes, can be brought under control by mid-May.

“With this step, we will go after people without symptoms,” said Namaki, adding this would require a large number of tests. He didn’t elaborate. The health ministry said searching for asymptomatic cases would be combined with restrictions on both city and intercity travel and quarantine.

Iran is facing the worst outbreak in the region. Iran’s state TV said Tuesday the new coronavirus has killed another 133 people, pushing the country’s death toll to 3,872 amid 62,589 confirmed cases.

There are nearly 109,000 confirmed cases across the Middle East, with more than 4,600 fatalities.

In Amman, Jordan, state-run news agency Petra reported that a criminal case had been filed against a person infected with the coronavirus who knowingly contacted others, exposing them to infection.

The report came as government spokesperson Amjad Adaileh said Tuesday that anyone infected with the coronavirus who doesn’t isolate themselves faces a possible fine or imprisonment.

Jordan has more than 350 confirmed cases of the virus, among them six fatalities.

In Egypt, the Ministry of Religious Endowments, which oversees mosques nationwide, called off all celebrations and late-evening prayer services for Ramadan, the holiest month of the Islamic calendar. The holiday, when devout Muslims fast from sunrise to sunset, begins April 23. To the dismay of many impoverished Egyptians already hit hard by restrictive measures, the ministry added that mosques would not host public iftars, the traditional dinners where Muslims end their daily fast.

Mosques and churches have already closed for prayer to curb the spread of the virus in the Arab world’s most populous country. There is also a nightly curfew but the government has resisted a harsher lockdown.

President Abdel Fattah el-Sissi on Tuesday sought to reassure the jittery public a day after officials reported 149 new infections, bringing the case count to 1,320 and 85 fatalities in the biggest single-day jump so far.

“So far, the situation is under control,” he said in televised comments. “The goal is to minimize the damage caused by the pandemic.”

For most people, the new coronavirus causes mild to moderate symptoms such as fever and cough. But for some, especially older adults and the infirm, it can cause pneumonia and lead to death.

Meanwhile, at a retirement home ravaged by the coronavirus in the southern Israeli city of Beersheba, another resident died, the eighth so far there. Dozens of the home’s residents have been infected and relatives have been staging angry protests outside the premises in recent days.

Overall, more than 9,000 have been infected in Israel and 60 have died, the vast majority elderly and many in assisted living facilities.