Up to 3,000 military reservists were called up to tackle Australia's relentless bushfire crisis on Saturday, as tens of thousands of residents fled their homes amid catastrophic conditions. 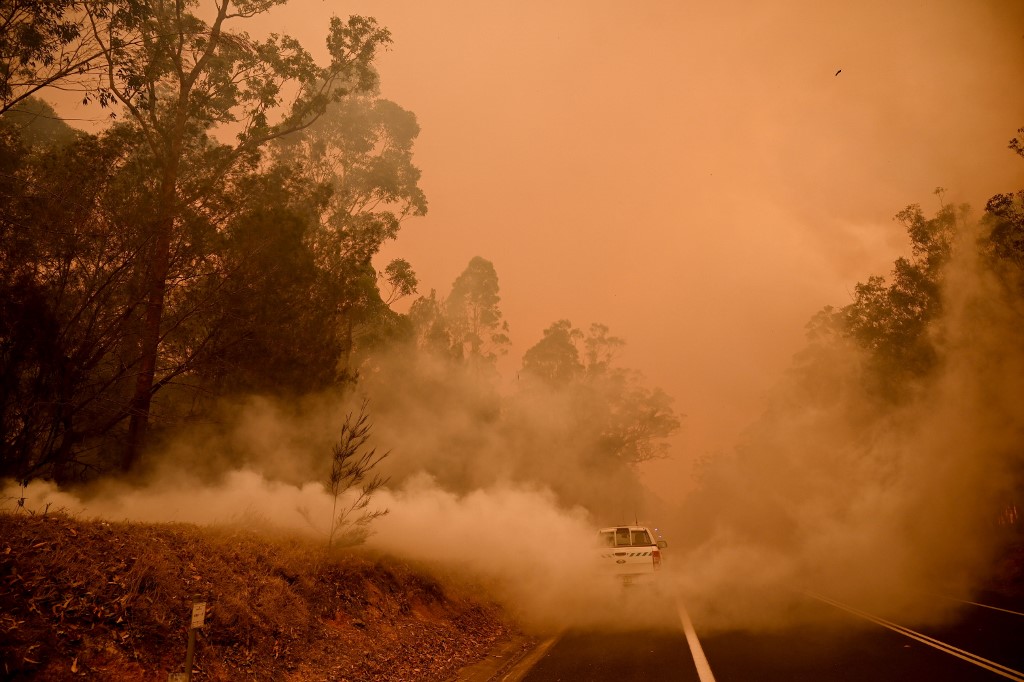 Firefighters tackle a bushfire in thick smoke in the town of Moruya, south of Batemans Bay, in New South Wales on January 4, 2020. (Photo: AFP)

Temperatures soared above 40 degrees Celsius (104 Fahrenheit) and gale-force winds fanned hundreds of fires, many of which are already burning out of control across the country.

Prime Minister Scott Morrison announced the largest military call-up in living memory to assist thousands of volunteer firefighters who have been battling blazes for months on end.

"Today's decision puts more boots on the ground, puts more planes in the sky, puts more ships at sea," said Morrison, who made the announcement after being pilloried for his response to the deadly disaster.

A state of emergency has been declared across much of Australia's heavily populated southeast and more than 100,000 people have been told to leave their homes across three states.

Thousands heeded that call Friday, abandoning summer holidays and piling into cars that clogged the highways linking southeastern coastal towns with the relative safety of Sydney or larger towns.

Since late September, more than 20 people have died, more than 1,500 homes have been damaged and an area roughly twice the size of Belgium or Hawaii has burned.

The latest fatalities came on Kangaroo Island -- a tourist haven off the coast southwest of Adelaide -- when two people were trapped in a car overrun by flames.

Fires there have "taken out much of the Flinders-Chase National Park," according to South Australia premier Steven Marshall, before the warm front spread to the mainland.

Ahead of the coming storm, an eerie calm settled over the smoke-shrouded town of Batemans Bay, a four-hour drive south of Sydney, where supermarkets, shops and the pub were all shuttered.

The only activity in the usually bustling tourist hotspot was at an evacuation centre, where hundreds of locals forced from their homes were sheltering on an open field in tents and caravans.

Mick Cummins, 57,  and his wife fled to the evacuation centre when fire ripped through his rural town on New Year's Eve.

"We said this is too tough for us, let's get out. We went to the beach and then hellfire came over the hill," he told AFP.

"I was here in the '94 fires. I thought that was bad. That was just a barbeque" in comparison, he said.

The scale of Australia's unprecedented months-long bushfire crisis has shocked not just locals but the world.

In the small town of Mallacoota, Australia's navy was called in to evacuate around 1,000 people trapped by fire and forced to wait for days on the foreshore.

Eloise Givney, 26, escaped from the blazes further up the coast with a police escort after she and a large group of family members spent four days isolated without power, phones or internet.

"The fire came within about 50 metres of us and we drove through fire, because there's only one road in and one road out," she told AFP, adding the flames soared 15 metres (50 feet) high on either side of the road.

"We've been stuck without power for four days now. We haven't been able to feed the kids -- we've got five kids with us -- and we ran out of food about a day ago."

The Bureau of Meteorology's Jonathan How said Saturday's "conditions are set to mirror or even deteriorate beyond what we saw on New Year's Eve".

"Strong, dry westerly winds will cause ongoing fires to flare up yet again threatening communities that have already experienced widespread devastation."

Several emergency warnings were issued Saturday, including one blaze southwest of Sydney that is feared could reach the city's outskirts.