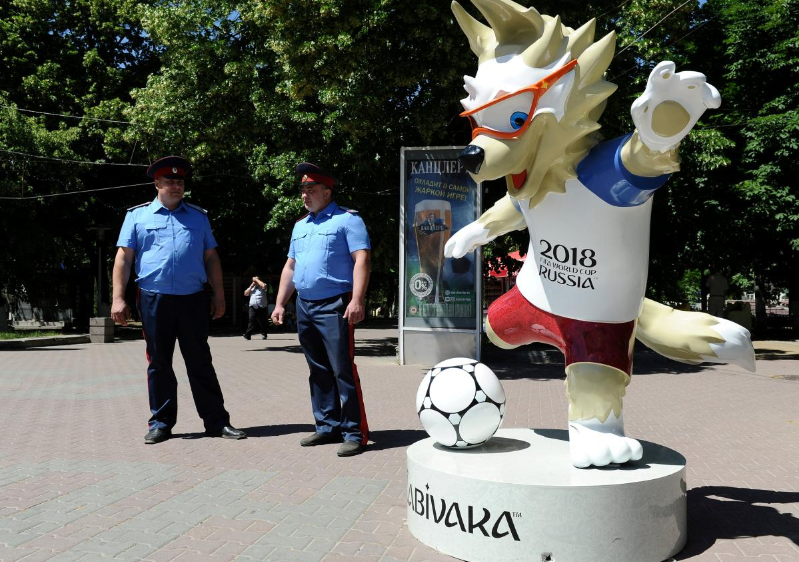 Cossacks stand guard on a street next to the official mascot for the 2018 FIFA World Cup Russia, Zabivaka in Rostov-on-Don, Russia June 7, 2018 (Photo: Reuters)

Russian paramilitary units providing security for the soccer World Cup included among their members Cossack fighters who took part in clandestine campaigns in Ukraine and Syria that Kiev and Washington condemn as backed by Moscow.

More than 800 members of at least six local Cossack organizations will patrol the streets, fan zones and team bases during the five-week tournament starting on Thursday, according to Cossack leaders and regional officials.

In some places in Russia they will also work on match days as stewards or volunteers, the Cossack commanders said.

At least 19 members of these groups have been identified by Reuters as having fought either alongside Moscow-backed separatist rebels in eastern Ukraine or as Kremlin-backed private military contractors in Syria in support of Moscow’s ally, President Bashar al-Assad.

Reuters identified the fighters and confirmed they belonged to the paramilitary groups through relatives, friends and their fellow Cossacks after they died or were captured. The number would likely be much higher if those who are still alive could be included.

The Ukraine government views anyone who fought with the separatists as criminals. The European Union and the United States also treat the separatist uprising as unlawful and have imposed travel bans and financial freezes on dozens of people involved in the fighting or aiding the separatists.

The Kremlin denies providing military support for the separatists in eastern Ukraine. It also says it has nothing to do with Russian private military contractors in Syria. Working as an armed mercenary abroad is illegal under Russian law.

Self-governing and semi-military communities mainly in southern Russia and Ukraine, Cossacks traditionally guarded the borders of the Russian Empire but were repressed in the Soviet era. Today many Cossack militia units are registered and funded by the central government in return for their loyalty. The 19 fighters identified by Reuters were all members of officially-registered Cossack units.

Cossack groups say that any members taking part in armed conflicts do so as private individuals.

But there is evidence that Cossack organizations have been supportive of those deployments. For one thing, they often organize burials with full honors for people killed in combat in Syria and Ukraine, and publish eulogies about them.

Speaking in his office decorated with flags of pro-Russian separatists fighting in eastern Ukraine, Cossack leader Alexander Anishchenko told Reuters about 200 members of the Great Don Army Cossack organization will guard areas outside the Rostov stadium during the World Cup matches.

At a time of fierce fighting in early 2015, a commander in the Great Don Army, Svyatoslav Borisov, posted pictures from rebel-held eastern Ukraine on his social network account, including two of him posing in front of a burnt-out tank.

Borisov told Reuters this week he only delivered humanitarian aid to pro-Russian rebels and did not fight.

“Every person decides for himself. If he likes fighting, he fights,” Borisov said of Cossacks who have fought in Ukraine. “I am a man of peace.”

Roman Zabolotny, a Rostov Cossack who is a member of the Great Don Army, was captured by Islamic State in Syria last year while fighting there as a private military contractor, according to fellow Cossacks.

Russia’s organizing committee for the Cup referred questions about the Cossack units’ role to the Interior Ministry, saying the ministry was responsible for tournament security. The ministry did not reply to a request for comment.

“The use of Cossack paramilitary groups is, on the one hand, evidence of the inability of the Russian leadership to ensure law and order during the 2018 soccer World Cup using state agencies, and on the other hand, it compromises an official FIFA event,” Turchynov said in a statement to Reuters.

“I believe that it is unacceptable on the part of the international community to consent to these actions.”

The statutes of FIFA, global football’s governing body, state that it “is committed to respecting all internationally recognized human rights and shall strive to promote the protection of these rights”.

“For FIFA, these groups’ involvement represents an outrageous betrayal of the organization’s charter,” US Congressman Eliot L. Engel, the top Democrat on the House Foreign Affairs Committee, told Reuters.

“I fear that rather than providing security at a peaceful, multinational gathering, these forces will instead silence government critics, beat protesters, and crack down on anyone who doesn’t conform to (President Vladimir) Putin’s standards,” he said in a statement.

Asked about the Cossacks’ role, a FIFA spokesperson said the organization has “complete trust in the security arrangements and comprehensive security concept” developed by the Russian authorities and local organizers of the tournament.

Sochi, the Black Sea resort which hosted the 2014 Winter Olympics, will see the biggest deployment of Cossacks with 538 members of the local Kuban Cossack Army taking part, the group’s spokeswoman told Reuters.

Five members of the Kuban Cossack Army have been killed in combat in eastern Ukraine and Syria since 2014, according to local Cossack commanders and people who knew the dead men.