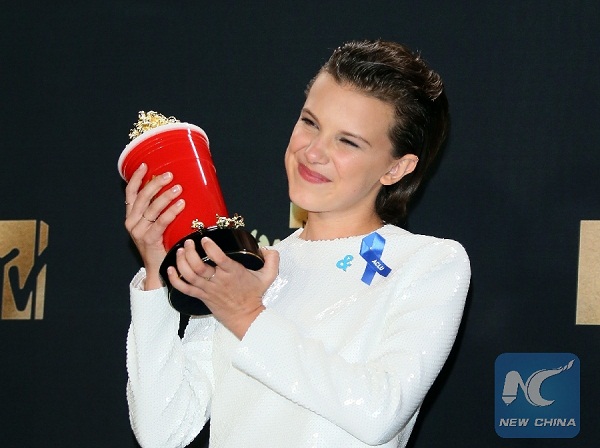 Actress Millie Bobby Brown holds her trophy in the press room during the 2017 MTV Movie & TV Awards at the Shrine Auditorium in Los Angeles, California, May 7, 2017. (File photo: Xinhua)

The appointment was announced on World Children's Day, which falls on Nov. 20.

"I'm delighted to welcome Millie to the UNICEF family, particularly on World Children's Day, a day that is all about giving children and young people a voice," said UNICEF Executive Director Henrietta Fore in a press release.

"Children are their own best advocates. I know that Millie will use her passion and dedication to defend the rights of vulnerable children and young people everywhere," said Henrietta Fore.

In her role as UNICEF Goodwill Ambassador, the 14-year-old star of "Stranger Things" will use her global platform to help raise awareness of children's rights and issues affecting youth, such as lack of education, safe places to play and learn, and the impact of violence, bullying and poverty, said the press release.

"It's a dream come true to become a UNICEF Goodwill Ambassador," Brown said in the press release. "It's a huge honor to join such an impressive list of people who have supported UNICEF over the years. I am looking forward to meeting as many children and young people as I can, hearing their stories, and speaking out on their behalf."

As part of the day, UNICEF is asking supporters to raise their voices in solidarity with the most disadvantaged and vulnerable children by helping "turn the world blue" -- by doing or wearing something blue at school, on the streets, on social media, in boardrooms and on sports fields on Nov. 20.

Iconic landmarks will light up blue, including Sydney Opera House in Australia, Water Cube in China, Galata Tower and bridges on the Bosphorus in Turkey, and The Empire State Building in New York City.

To celebrate the annual commemoration, stars and leaders from the worlds of entertainment, government, sport and business will rally for children in support of their rights, and children will "take over" high-profile roles to highlight issues that are important to them.