WORLD Millions at stake in dinosaur fight: Are fossils minerals?

Millions at stake in dinosaur fight: Are fossils minerals? 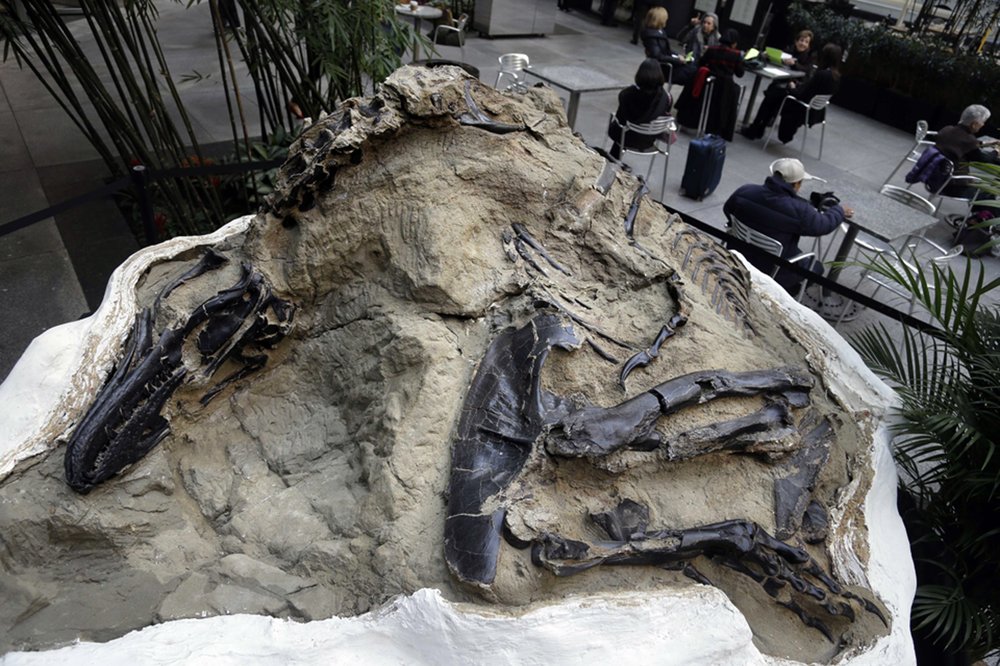 The discovery of two fossilized dinosaur skeletons intertwined in what looks like a final death match could make a Montana ranching couple rich beyond their dreams. Or they may have to share the wealth.

It all comes down to how the state Supreme Court answers a seemingly simple question: Are fossils minerals? The Montana justices heard arguments Thursday but did not rule right away.

The outcome is key to a dispute over ownership of the “dueling dinosaurs,” worth more than $5 million, and distribution of millions of dollars in proceeds from the sale of other fossils unearthed from clay and sandstone in a fossil-rich area of central Montana.

While someone can own what’s on top of a piece of land, others can own material like oil, gas and coal that’s found below the surface. In property sales, an owner can keep some or all of those below-surface mineral rights.

Mary Ann and Lige Murray own the surface rights and one-third of the mineral rights on the ranch near the tiny town of Jordan, while brothers Jerry and Robert Severson own two-thirds of the mineral rights after a 2005 property sale. Neither side expected to find fossils on the property, and they’re not mentioned in the contract, court documents show.

A few months later, amateur paleontologist Clayton Phipps discovered a 22-foot-long (7-meter-long) carnivorous theropod and a 28-foot-long (9-meter-long) plant-eating ceratopsian believed to have died 66 million years ago. Imprints of the dinosaurs’ skin were found in the sediment.

When the Murrays went to sell the “dueling dinosaurs” for what they hoped would be at least $6 million, potential buyers wanted assurances they owned the fossils. The Murrays sought a court ruling.

Both sides have seen rulings in their favor as the case has made its way through four courts since 2013.

A US judge in Montana ruled in 2016 that fossils were not included in the ordinary definition of a mineral because not all fossils with the same mineral composition are considered valuable. The judge said the value was based on things like the completeness of the specimen, the species of dinosaur and how well it is preserved.

The Seversons appealed. A panel of the 9th US Circuit Court of Appeals ruled 2-1 last year that the dinosaur fossils were minerals both scientifically and under mineral rights laws.

The Murrays asked for a full panel of the appeals court to hear the case. The judges agreed but first asked the Montana Supreme Court to rule whether fossils are considered part of a property’s mineral estate under state law.

Eric Wolff, an attorney for the Seversons, argued Thursday that the fossils in this case are composed of minerals and are valuable and are therefore part of the mineral estate.

His clients would then be part owners of the fossil finds, which include a nearly complete Tyrannosaurus rex that was sold to a Dutch museum in 2014 for what a justice and Wolff suggested was about $15 million. That value couldn’t be independently confirmed.

“What a mineral right is, is a lottery ticket under the ground,” Wolff said. “I give you the property, and I say, ‘If there’s valuable rocks under there, I am retaining my interest in it.’”

He asked the justices for a narrow ruling based on just the fossils in this case, not a decision on all fossilized dinosaur bones, some of which aren’t valuable.

“What you want us to answer is to say, ‘Some are, some aren’t?’” asked Justice James Shea, wondering how it would be practical for courts to decide ownership on a case-by-case basis.

Harlan Krogh, an attorney for the Seversons, urged the justices to answer the question the 9th Circuit posed: Whether Montana law says dinosaur fossils constitute minerals when someone is retaining the mineral rights to a property.

“Montana has never recognized dinosaur fossils as a mineral” like it has oil, coal or gold, he said, adding that fossils are not mined, processed, milled or smelted.

State law was silent on the issue until earlier this year, when lawmakers unanimously passed a measure that says dinosaur fossils are part of the surface estate unless there’s a contract saying otherwise.

“The citizens have spoken about the answer to that question,” Krogh said.

However, the new law also says it cannot be a factor in any cases already in court.