WORLD Millions of Californians locked down, UK to start vaccinating

Millions of Californians locked down, UK to start vaccinating 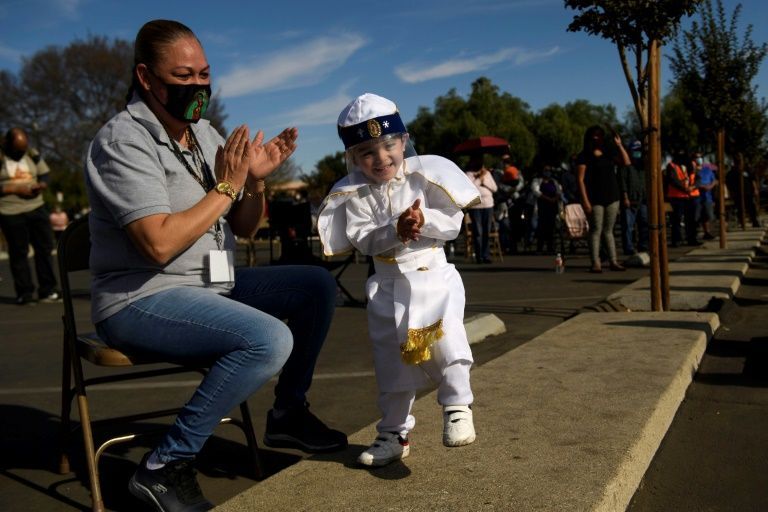 A child wears a face shield while dancing after Sunday mass in San Gabriel, California -- 20 million people in the state were under stay-at-home orders from Monday. (Photo: AFP)

The lockdown in America's most populous state forced most offices to close and banned gatherings among different households, while bars and services such as hair salons were shut and restaurants only allowed to serve takeaways.

"The overwhelming majority of Californians are now in this new stay-at-home order protocol," said state Governor Gavin Newsom, who earlier warned that the state hospital system was at risk of being "overwhelmed."

The United States' floundering efforts to quell the Covid-19 pandemic have been widely criticized, with a daily death toll of over 2,500 for five days in a row last week.

President Donald Trump and senior officials have repeatedly downplayed the risks while ignoring basic public health measures such as mask-wearing and social distancing at mass rallies and White House events.

Trump's personal lawyer Rudy Giuliani, 76, tested positive for Covid-19 and was hospitalized Sunday, the latest member of his inner circle to contract the disease.

Biden on Monday vowed that his incoming administration would be "ready on day one to mobilize every resource of the federal government... and restore the belief that there is nothing beyond America's capacity."

When the president-elect takes office on January 20, he will be immediately responsible for an immunization drive set to launch this month in a bid to gain control of a pandemic that has killed 280,000 people in America.

The US is expected to grant emergency authorization for the Pfizer and Moderna vaccines this week, and it hopes to vaccinate millions of people by the end of the year.

As countries begin gearing up for mass vaccinations, the UN General Assembly moved to make December 27 the "International Day of Epidemic Preparedness", with the body calling on the World Health Organization to help facilitate the day's observance.

The WHO also said that it would be more effective for countries to persuade residents on the merits of a Covid-19 vaccine than trying to make the jabs mandatory.

The world-first rollout of the Pfizer vaccine is due to begin in Britain on Tuesday, with Health Secretary Matt Hancock volunteering to take it live on television to assuage any doubts over its rapid approval.

Croydon University Hospital in south London is one of 50 clinical hubs that started receiving the country's initial consignment of 800,000 doses over the weekend, from a Pfizer plant in Belgium.

"To know that they are here, and we are amongst the first in the country to actually receive the vaccine and therefore the first in the world, is just amazing," said Louise Coughlan, joint chief pharmacist at the Croydon hospital trust.

First in line will be people aged 80 and over, care home workers, and frontline staff in the National Health Service who are considered at higher risk.

The novel coronavirus has killed at least 1,535,987 people since the outbreak emerged in China last December, according to a tally from official sources compiled by AFP.

In the race to get vaccines, Prime Minister Justin Trudeau said Pfizer and BioNTech will deliver their first doses to Canada within weeks.

The country is the world's second-worst hit by the pandemic after the United States, and has already recorded more than 140,000 deaths.

With hopes for a regular Christmas shattered, German Chancellor Angela Merkel urged regions with high coronavirus rates to tighten restrictions, while Denmark said it will close middle and high schools, bars, cafes and restaurants in half of the country.

Further south, Greece extended its restrictions until January 7, but Austrians got a boost when the government lifted its measures.

"We couldn't wait with the shopping, even if it might be a bit crowded today," Robert Bauer told AFP as he shopped in Vienna.

As the world plans for a tentative return to normal life, the World Economic Forum said next year's Davos summit would be moved from Switzerland to Singapore, where it will be held in person in May.