WASHINGTON, June 9 (Xinhua) -- Hospitals and state health departments across the United States are racing to decide how to use up millions of Johnson & Johnson's COVID-19 vaccine doses that are set to expire this month, while lots of developing nations are still falling short of shots. 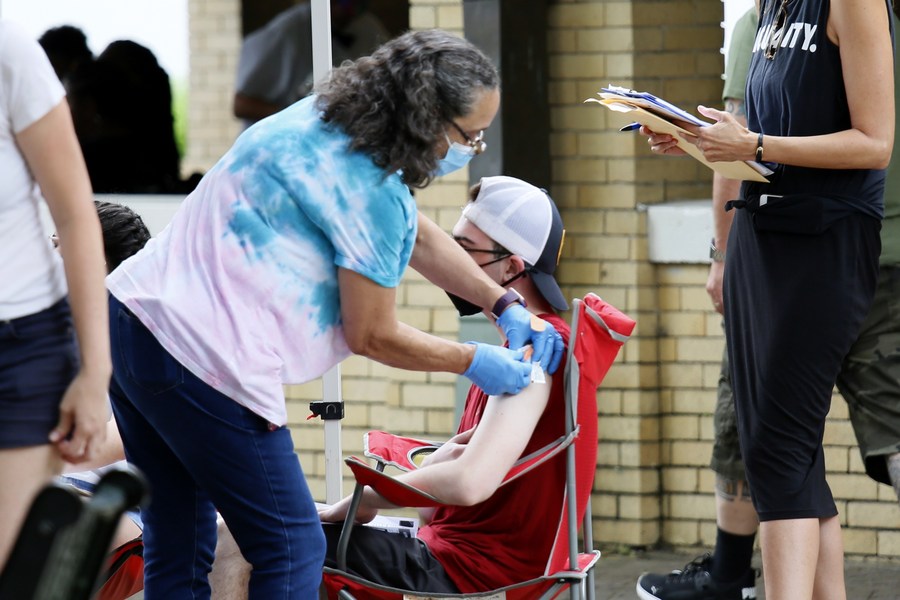 A man gets vaccinated against COVID-19 at a vaccination festival in New Orleans, New Orleans, Louisiana, the United States, on May 29, 2021. (Photo by Lan Wei/Xinhua)

Millions of Johnson & Johnson vaccines will expire in June, and thousands could be wasted because fewer and fewer Americans are getting vaccinated, according to reports by The Wall Street Journal and The New York Times.

"Ohio does not have legal options for sending the vaccine elsewhere, either to other states or other countries," DeWine said in a statement. The Ohio Department of Health has been aggressively working with COVID-19 vaccine providers to identify tactics to use as many doses of the Johnson & Johnson vaccine before they expire.

Like Ohio, some other states have considered shipping excess doses to other states or overseas, but said they faced legal and logistical hurdles.

The stockpile is, in part, an unintended consequence of the U.S. decision in April to temporarily suspend administration of Johnson & Johnson doses to assess a rare blood-clot risk, according to The Wall Street Journal report.

The pause forced states and providers to cancel large blocks of appointments that were never rescheduled, leaving a surplus of supply, and in some areas increasing hesitancy over the Johnson & Johnson vaccine's safety, according to industry officials.

According to the latest data of the U.S. Centers for Disease Control and Prevention, just 52 percent of Johnson & Johnson shots delivered to states have been administered, compared to about 84 percent for Pfizer vaccine and 83 percent for Moderna vaccine.

The Johnson & Johnson vaccine is the only single-dose vaccine authorized for emergency use in the United States. It can be stored in a regular refrigerator for up to three months. Thus it is easier to transport, store, and administer than other vaccines.

The prospect of so many Johnson & Johnson doses going to waste in the United States when developing nations are desperate for shots has sparked criticism.

As high vaccination rates are helping wealthier countries to gradually recover from the pandemic, many poor countries are far behind in their inoculation efforts, hobbling their economies and raising risks for wide spread of more dangerous COVID-19 variants.

The international community has called for the Biden administration to share stockpiled COVID-19 vaccines.