Afghanistan’s new foreign minister said Tuesday that the Taliban governing the country remain committed to not allowing militants to use their territory to launch attacks. But he refused to say when or if the country’s new rulers would create a more inclusive government. 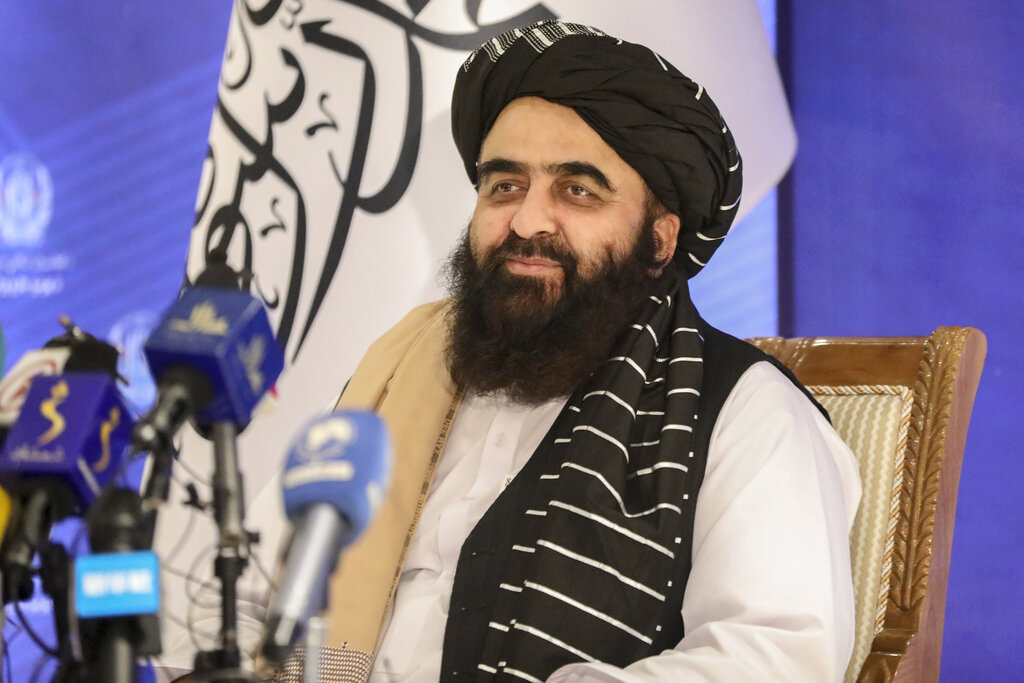 The foreign minister in Afghanistan’s new Taliban-run Cabinet, Amir Khan Muttaqi, gives a press conference in Kabul, Afghanistan, Tuesday, Sept. 14, 2021. Muttaqi said Tuesday that the government remains committed to its promises not to allow militants to use its territory to attack others. (Photo: AP)

Without other political factions and women serving in the government, the Taliban seem unlikely to win international recognition as the legitimate leaders of Afghanistan. And without such recognition, the Afghan state is unable to tap billions of its funds frozen abroad, leaving it virtually bankrupt at a time of immense humanitarian need.

The Taliban received sharp criticism last week after they announced a Cabinet made up entirely of men from their movement, including several on international terror lists. Taliban leaders previously had promised broader representation.

Amir Khan Mutaqi, a longtime Taliban negotiator named as foreign minister, appeared Tuesday at his first news conference since becoming a member of the interim government. But he gave little indication of whether the Taliban would bend to international pressure.

Asked if the Taliban would include women or ethnic and religious minorities in the government, Mutaqi answered, “We will decide in time” but did not offer a commitment.

He underscored that the current government is ruling on an interim basis and said that when a permanent one is formed, “we will take into account what the people want.” He would not give a timetable for a permanent government.

“We are taking everything step by step. We have not said how long this Cabinet will last,” Mutaqi said.

After the withdrawal of Western troops and the Taliban’s sudden return to power last month, the U.S. and its allies have used money, potential recognition and warnings of isolation to pressure them away from repeating their repressive rule of the 1990s. At that time, the Taliban imposed a harsh interpretation of Islamic law, including severe restrictions on women and minorities.

Mutaqi, responding Tuesday to a question about the eventual holding of elections, replied that other countries must not interfere in Afghanistan’s internal issues, a comment he repeated several times during the news conference.

However, the foreign minister did give the first confirmation from the interim government of the new Cabinet’s intention to honor a deal the Taliban reached with the United States last year.

Under the deal, which opened the way for the American withdrawal from Afghanistan, the Taliban promised to break ties with al-Qaida and other militant groups and ensure they don’t threaten other countries from the movement’s territory.

“We will not allow anyone or any groups to use our soil against any other countries,” Mutaqi said.

While ruling Afghanistan during the late 1990s, the Taliban sheltered al-Qaida and its chief, Osama bin Laden. Their refusal to hand over bin Laden and other al-Qaida members after the Sept. 11 terror attacks prompted the U.S. to launch a military assault which ousted the Taliban and led to a 20-year war in Afghanistan.

Many experts remain skeptical the Taliban have broken ties with al-Qaida since they reached the 2020 withdrawal deal with the Trump administration. But al Qaida has been significantly weakened, and Washington has made clear its top priority is preventing Islamic State attacks from Afghanistan.

The Taliban have battled with the Islamic State since its emergence in Afghanistan in 2014. A burgeoning IS affiliate has claimed responsibility for most recent attacks, including the horrific bombing outside the Kabul airport that killed 13 U.S. service personnel and 169 Afghans during last month’s chaotic evacuations.

Still, U.S. Army Lt. Gen. Scott Berrier, who leads the Defense Intelligence Agency, said at a national security summit Tuesday that al-Qaida could begin to threaten the United States from Afghanistan within one to two years, echoing warnings that were issued before the U.S. withdrawal.

Meanwhile, the broader terms of the world’s relationship with the Taliban remain unsettled a month after they swept into Kabul on Aug. 15 and Afghanistan's U.S.-backed president, Ashraf Ghani, fled the presidential palace.

There also appear to be divisions within the Taliban over the next steps. Some leaders are said to be more open to compromise, while others insist on resolute Taliban domination.

The makeup of the Taliban government poses a dilemma for the United Nations as it prepares to open a new session of the U.N. General Assembly. Several of the interim ministers, including Mutaqi, Prime Minister Mohammad Hasan Akhund and Interior Minister Sirajuddin Haqqani, are on the U.N.’s so-called black list of international terrorists and terrorist financers.

Haqqani is also wanted by the FBI for questioning in connection with attacks in the Afghan capital during the last two decades. As the interim interior minister, he oversees Afghanistan’s police and has already called former officers back to work. While some have returned, including most traffic police, many are reluctant.

Mutaqi urged the U.N. to remove the Taliban ministers from the watch list. “The list has no logic,” he said.

When the Taliban last ruled, the U.N. refused to recognize their government and instead gave Afghanistan’s seat to the previous, warlord-dominated government of President Burhanuddin Rabbani, who eventually was killed by a suicide bomber in 2011. It was Rabbani's government that brought bin Laden to Afghanistan from Sudan in 1996.

This time around, it is not clear whether the seat will be reserved for a representative of Ghani's government. The president's sudden departure shocked the political leadership in Kabul, including former President Hamid Karzai and Abdullah Abdullah, the government’s chief negotiator, who were still negotiating with the Taliban to form an interim government.

The governments of the U.S. and other countries promised millions in new humanitarian aid for the U.N. to spend in Afghanistan as the country faces increasing hunger and economic collapse, but they suggested a future willingness to help could depend on the actions of the Taliban.

During a second day of tough congressional questioning about the Afghanistan withdrawal, Secretary of State Antony Blinken said the Biden administration would hold the Taliban, to their promises not to allow Afghanistan to be used again as a base for terrorist attacks.

Mutaqi said the Taliban-led government seeks good relations with foreign nations but insisted they must not interfere in its affairs. He also called for international donors to send more aid and international banking institutions to continue their projects in Afghanistan.

“Afghanistan is poor. It needs all the help” the world can give, Mutaqi said, promising that foreign aid would be distributed without corruption.

He also said that all of Afghanistan’s embassies operating abroad have been told to continue their operations. He promised Afghans would be allowed to leave the country and said it was the job of the Taliban government to provide passports to its citizens.