WORLD Minnesota at the heart of election battle for US Congress

Minnesota at the heart of election battle for US Congress 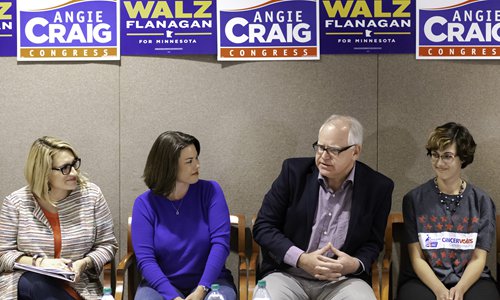 Democratic congressional candidate Angie Craig (2nd from left) and US Representative Tim Walz (2nd from right) attend a campaign event in Minnesota, the US. (Photo: AFP)

President Donald Trump has visited Minnesota twice in less than six months. Political strategists are parachuting in from Washington. The writing is on the wall: this is a critical election battleground state.

It is also a state where a much heralded Democratic "blue wave" could crest - or peter out - in next month's midterms.

From sprawling forests on the Canadian border and vast farmlands in the south to the high-tech medical research facilities in the twin cities of Minneapolis and Saint Paul, the state is a microcosm of America's shifting electorate that often defies traditional party lines.

Minnesota - nicknamed the "Land of 10,000 Lakes" - has not voted for a Republican presidential candidate since Richard Nixon, back in 1972.

But in 2016, the unthinkable nearly occurred, as Trump came tantalizingly close to snatching the state from Hillary Clinton.

"On November 6, I need your vote, I need your support to stop radical Democrats and elect proud Minnesota Republicans," Trump told an energized rally last week in Rochester, south of Minneapolis.

Republicans are defending their majority in the US Congress, where all 435 seats in the House of Representatives are up for grabs, as are 35 seats in the 100-member Senate.

Democrats are in prime position to retake the House, which would give them considerable power to block the Republican president's legislative agenda.

The election fault lines run right through Minnesota, home to 5.5 million people, where four congressional races are coming down to the wire.

Democrats hope to flip two districts, but are also struggling to prevent a Republican takeover of two historic leftist bastions.

The state's two incumbent Democratic senators, the popular Amy Klobuchar and newcomer Tina Smith, are unlikely to be ousted. But Republicans are not admitting defeat just yet.

Minnesota has "become one of these central states for political contests in 2018," political science professor Steven Schier of Carleton College, located outside the Twin Cities, told AFP.

"There's all sort of outside money coming in" to support candidates in a state with one of the highest voter turnouts in the country, Schier said.

Trump's metals tariffs have been welcomed by miners in the historically Democratic north, while the trade war with China and visa restrictions for seasonal workers have left farmers indignant in the Republican-leaning south.

And looming like a shadow over Minnesota is the nagging question of health care, with proposed Republican changes threatening to leave large numbers of people with diminished or no coverage.

The issue strikes a nerve for Democratic candidate Angie Craig, who was raised by a single mother in a mobile home and spent part of her childhood without health insurance.

"This is really, really a very personal issue to me," Craig told voters at a recent roundtable event.

Craig, 46, is challenging incumbent Jason Lewis in congressional District 2, which Democrats hope to swipe from Republicans.

As a gay candidate with a wife and four children, she cuts a unique figure in a district that has never sent a woman, let alone a lesbian, to Washington.

But in a year with a record number of women candidates in the running, polls are favoring her.

"I'm very optimistic that the country is ready for a change, and so is this district," she told AFP.

The determined granddaughter-in-law of a farmer acknowledges that Trump's administration did well to renegotiate some trade pacts, such as the one with Canada and Mexico, that were "not exactly fair."

But "by starting a trade war in adding tariffs with China, it's really hurting our soybean farmers," she warned.

That position resonates with Bill Sorg, who runs a farm founded by his ancestors in 1886 near the Mississippi River.

The septuagenarian manages 300 dairy cows and grows corn, soybeans and alfalfa on 1,600 hectares.

Despite his permanent smile, trade tensions between America and the rest of the world worry him.

Even though he does not export crops, the slide in China's demand for US soybeans has depressed prices.

Sorg will vote for Craig - he says she "understands the plight of the rural community."

"And I think she understands the problems with health care," he added.

The dynamics are different in Minnesota's north.

"Unemployment is low, optimism is high, small businesses are hiring and investing in their companies and consumer confidence is off the charts," Stauber, a veteran police officer and onetime minor league hockey player in a state obsessed with the sport, told AFP.

Going into the campaign's final month, Stauber is polling neck and neck with his Democratic opponent Joe Radinovich.

Given such shifts in its electorate, Minnesota will be "one of the key swing states" in the 2020 presidential race, said Schier of Carleton College.

"It's quite likely whoever carries the state of Minnesota will be the next president of the United States."