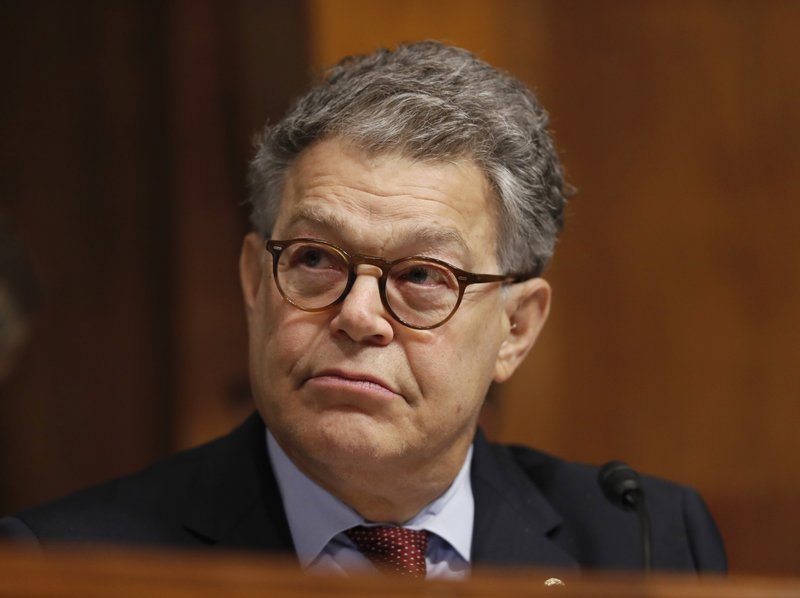 The Latest on Sen. Al Franken, D-Minn., and the allegations of sexual misconduct against him (all times local):

Minnesota Republicans are reaching out to former Gov. Tim Pawlenty about running in a race to replace Sen. Al Franken.

Franken says he is resigning after accusations by several women of sexual misconduct. That sets up a November 2018 election to serve the final two years of his term.

Coleman has already posted on his personal Facebook page that he won’t run. He narrowly lost to Franken in 2008 in a close election that included a monthslong vote count.

Pawlenty ran for president in 2012.

Sen. Al Franken says he’s been an advocate for women. That’s even as he resigns amid a torrent of sexual misconduct accusations.

The Minnesota Democrat says he’s used his position “to be a champion of women.” He says despite the allegations, “I know who I really am.”

He says, “Even on the worst day of my political life, I feel like it’s all been worth it.”

Franken is serving his ninth year as senator. He says he’ll resign in the coming weeks.

The Democratic governor says he expects to make and announce his decision in the next couple of days. Whomever he names will serve until a special the election in November to complete the remainder of Franken’s term through 2020.

Democratic senators, staff and family members were somber yet emotional as they watched Minnesota Sen. Al Franken say he would resign.

Franken’s family members sat in the Senate gallery, some of them crying. Staff lined up in the back of the chamber, stone faced. And around 18 Democratic senators quietly listened to his speech on the floor. Republican Sen. Jeff Flake of Arizona was also there.

Franken was facing multiple sexual misconduct allegations. After his 11 minute speech, Democrats lined up to hug him.

The Minnesota lawmaker took to the Senate floor to say, “I may be resigning my seat, but I am not giving up my voice.” He says he’ll addressing issues as an activist.

Franken says he can’t go through a Senate Ethics Committee investigation and effectively represent his state at the same time.

In remarks that lasted 11 minutes, he said that, thanks to his family, “I’m going to be just fine.”

He says some charges against him are untrue and that he remembers other differently than his accusers do. But he says women “deserve to be heard and their experiences taken seriously.”

Once a rising star in the Democratic Party, Franken made the announcement in a speech Thursday on the Senate floor.

The two-term lawmaker has repeatedly apologized as several women stepped forward to accuse him of sexually inappropriate behavior, from groping to forcibly trying to kiss them.

But a fresh allegation on Wednesday unleashed a torrent of Democratic demands that Franken step aside. Female senators led the chorus.

Franken is an actor who appeared on “Saturday Night Live” and an author who narrowly won his Senate seat in 2008 after a prolonged vote count. He has been a fierce opponent of the Trump administration.

His political fall has been swift by congressional standards. The first allegation surfaced on Nov. 16.

Democratic Sen. Tim Kaine is asking about the number of sexual harassment claims filed against senators and staffers, along with the amount of money spent on settlement of harassment cases.

Kaine writes in a letter to the Senate Office of Compliance that he will publicly release any information he receives to promote greater awareness of the problem and develop solutions.

The Virginia senator’s letter comes as Democrat Al Franken of Minnesota is under pressure to resign from the Senate amid allegations of sexual misconduct.

The House has revealed it paid $84,000 in taxpayer money to settle a sexual harassment complaint against Texas Republican congressman Blake Farenthold. Settlements by senators, if any, have not been made public.

Kaine says sexual misconduct continues to be a barrier against gender equality.

Sen. Al Franken will say whether he is resigning in a speech on the Senate floor at 11:45 a.m.

Franken is under intense pressure to step down as allegations of sexual misconduct have mounted, with at least eight women accusing him of acting inappropriately.

The Minnesota senator’s support among fellow Democrats crumbled on Wednesday after a woman accused Franken of trying to forcibly kiss her in 2006. Hours later another woman said Franken inappropriately squeezed “a handful of flesh” on her waist while posing for a photo with her in 2009.

A tweet on Franken’s Twitter account Wednesday evening said Franken was talking with his family, and any report of a final decision his future was inaccurate.

Minnesota Democrat Al Franken, facing fresh allegations of sexual misconduct and vanishing support from fellow Democrats, appears to be on the brink of resigning from the Senate.

Franken scheduled an announcement for Thursday, though his office tweeted Wednesday evening that he had not made “a final decision” on resigning.

But a majority of the Senate’s Democrats called on the two-term lawmaker to quit after a woman emerged Wednesday morning saying he forcibly tried to kiss her in 2006. Hours later, another woman said Franken inappropriately squeezed “a handful of flesh” on her waist while posing for a photo with her in 2009.

That brought the number of women alleging misconduct by Franken to at least eight.