Mishaps, protests and litigation are overshadowing the vote recount in Florida's pivotal races for governor and Senate, reviving memories of the 2000 presidential fiasco in the premier political battleground state. 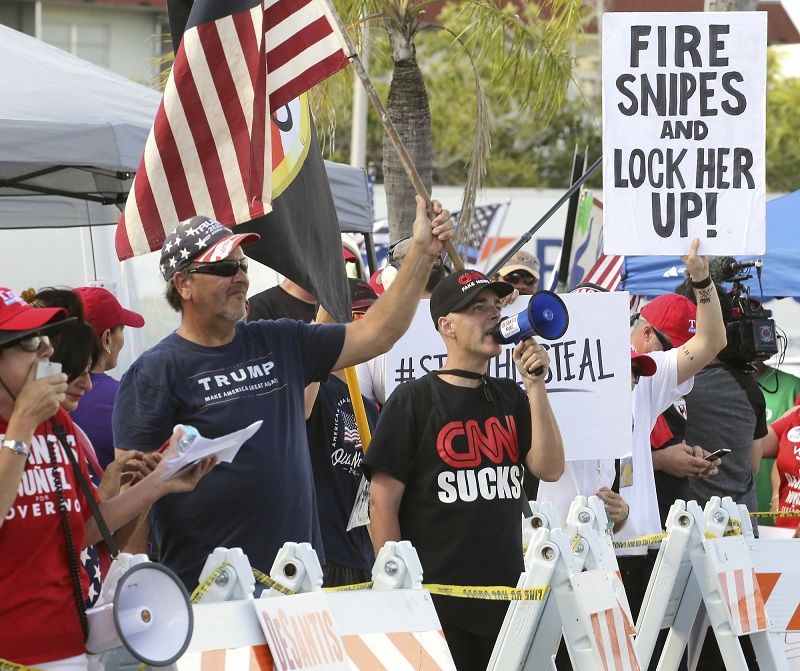 Crowd of protestors gather outside the Broward County of Supervisor of Elections Office as the statewide election recount is underway while ballots for governor, Senate, Agricultural Commission were run through scanning machines in Broward for a second time under the watchful eye of representatives of both parties and the campaigns on Sunday, Nov. 11, 2018. (Photos: AP)

All 67 counties are facing a state-ordered deadline of Thursday to complete their recounts and half already had begun. Many other counties were expected to begin the work Monday after a weekend of recount drama in Broward and Palm Beach counties, home to large concentrations of Democratic voters.

The developments added up to a tumultuous political day in Florida. More than half of Florida's 67 counties began a recount process that's unprecedented even in a state notorious for settling elections by razor-thin margins. State officials said they weren't aware of any other time a race for governor or U.S. Senate required a recount, let alone both in the same election.

In Broward County, the recount was delayed for hours Sunday because of a problem with one of the tabulation machines. That prompted the Republican Party to slam Broward's supervisor of elections, Brenda Snipes, for "incompetence and gross mismanagement."

Broward officials faced further headaches after acknowledging the county mistakenly counted 22 absentee ballots that had been rejected. The problem seemed impossible to fix because dismissed ballots were mixed in with 205 legal ballots and Snipes said it would be unfair to throw out all the votes.

Gov. Rick Scott, the Republican candidate for Senate, filed suit against Snipes. He was seeking a court order for law enforcement agents to impound all voting machines, tallying devices and ballots "when not in use until such time as any recounts." The suit accused Snipes of repeatedly failing to account for the number of ballots left to be counted and failing to report results regularly as required by law.

The court didn't immediately respond, though the outcry from Democrats was immediate.

Juan Penalosa, executive director of the Florida Democratic Party, accused Scott of "using his position to consolidate power by cutting at the very core of our democracy."

Meanwhile, in Palm Beach County, the supervisor of elections said she didn't think her department could meet Thursday's deadline to complete that recount, throwing into question what would happen to votes there. 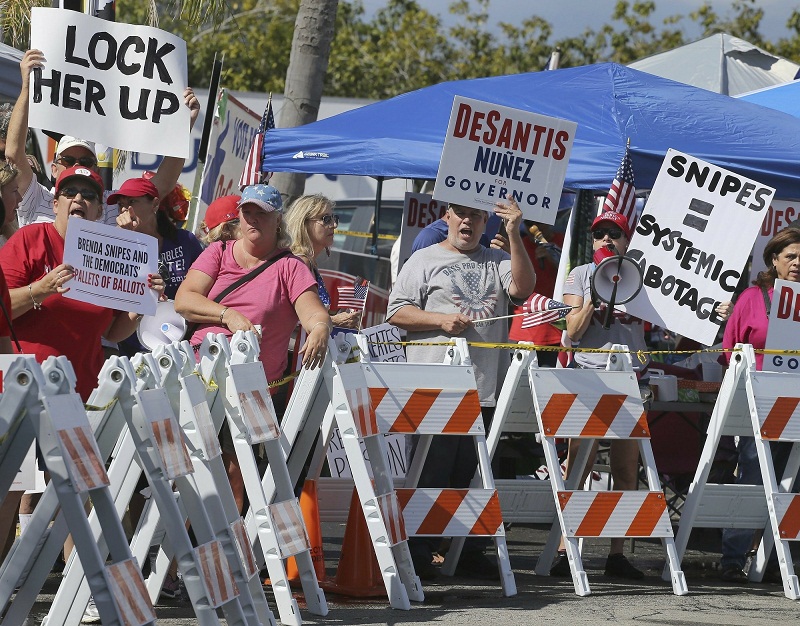 The recount in other major population centers, including Miami-Dade and Pinellas and Hillsborough counties in the Tampa Bay area, has been continuing without incident. Smaller counties were expected to begin reviews between Monday and Wednesday.

State officials said they weren't aware of any other time a race for governor or U.S. Senate required a recount, let alone both in the same election. The recount process in the two nationally watched midterm races is unprecedented even in a state notorious for settling elections by razor-thin margins.

State law requires a machine recount in races where the margin is less than 0.5 percentage points. Once completed, if the differences in any of the races are 0.25 percentage points or below, a hand recount will be ordered.

As the recount unfolded, Republicans urged their Democratic opponents to give up and let the state to move on.

Scott said Sunday that Nelson wants fraudulent ballots and those cast by noncitizens to count, pointing to a Nelson lawyer objecting to Palm Beach County's rejection of one provisional ballot because it was cast by a noncitizen.

"He is trying to commit fraud to win this election," Scott told Fox News. "Bill Nelson's a sore loser. He's been in politics way too long."

Nelson's campaign issued a statement later saying their lawyer wasn't authorized to object to the ballot's rejection as "Non-citizens cannot vote in US elections." 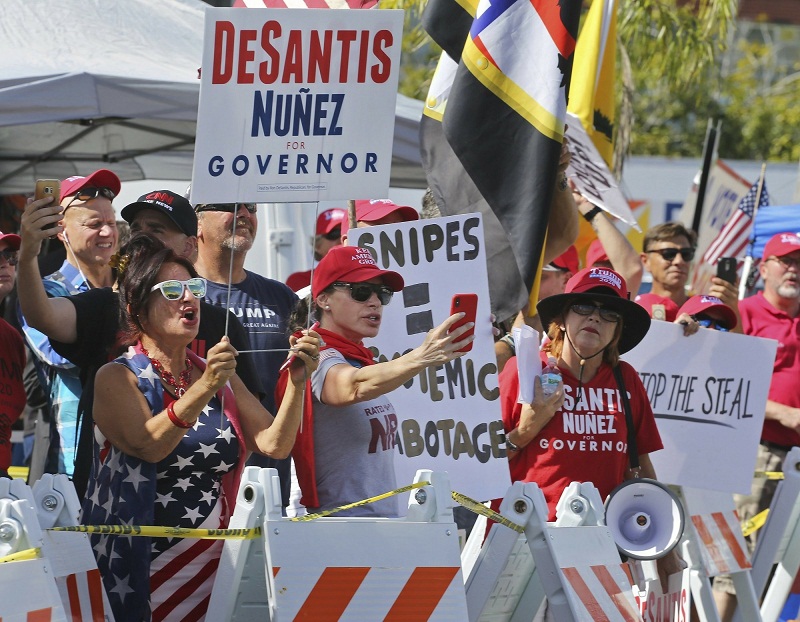 In Fort Lauderdale, Gillum appeared at a predominantly African-American church Sunday evening, warning against vote suppression and declaring voter disenfranchisement isn't just about being blocked from the polling booth. He said it also includes absentee ballots not being counted and ballots with mismatched signatures that "a volunteer may have the option of ... deciding that vote is null and void."

Gillum and Nelson have argued each vote should be counted and the process should take its course.

Both the state elections division, which Scott runs, and the Florida Department of Law Enforcement have said they have found no evidence of voter fraud.

That didn't stop protests outside Snipes' office, where a crowd of mostly Republicans gathered, holding signs, listening to country music and occasionally chanting "lock her up," referring to Snipes. A massive Trump 2020 flag flew over the parking lot and many members of a Bikers For Trump group wore matching shirts, mingling among a crowd that included a protester wearing a Hillary Clinton mask.

For some, the recounts bring back memories of the 2000 presidential recount, when it took more than five weeks for Florida to declare George W. Bush the victor over Vice President Al Gore by 537 votes, thus giving Bush the presidency.

Much has changed since then. 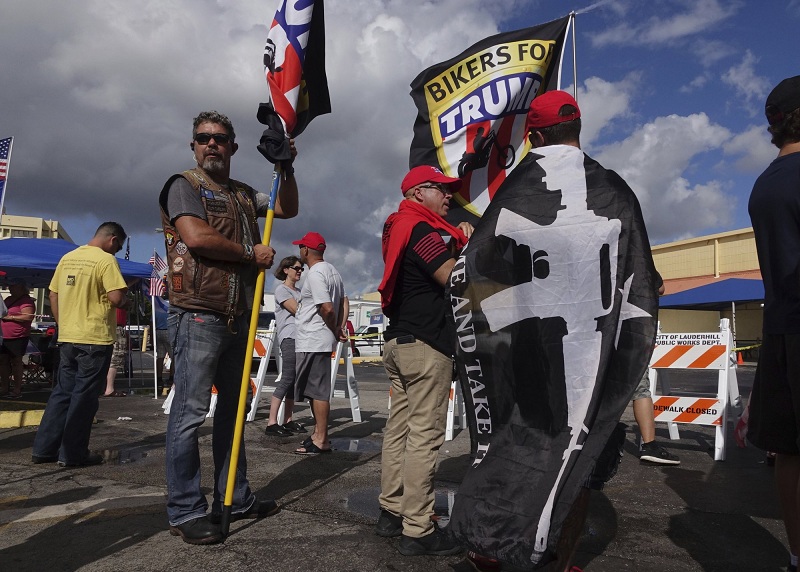 In 2000, each county had its own voting system. Many used punch cards — voters poked out chads, leaving tiny holes in their ballots representing their candidates. Some voters, however, didn't fully punch out the presidential chad or gave it just a little push. Those hanging and dimpled chads had to be examined by the canvassing boards, a lengthy, tiresome and often subjective process that became fodder for late-night comedians.

Now the state requires all Florida counties to use ballots where voters use a pen to mark their candidate's name, much like a student taking a multiple-choice test. And how counts proceed is now clearly spelled out.