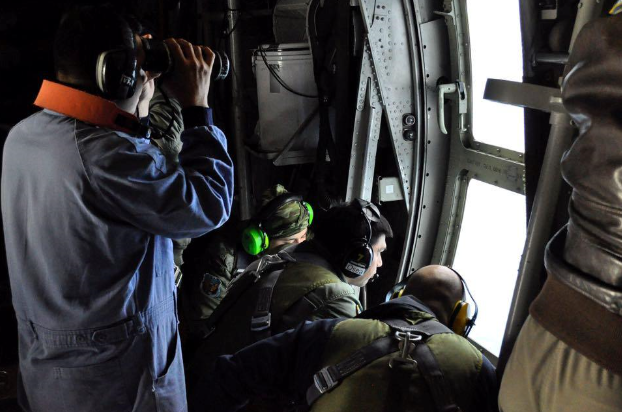 Members of the Argentine Navy look down at the sea from an airplane during a flight to search for the ARA San Juan submarine missing at sea, Argentina November 22, 2017. Argentine Navy/Handout via REUTERS ATTENTION EDITORS - THIS IMAGE WAS PROVIDED BY A THIRD PARTY.

The search for an Argentine submarine missing in the South Atlantic for more than a week has highlighted the dwindling resources and lack of training faced by the armed forces since the end of a military dictatorship in the early 1980s.

As South America’s second-largest economy has lurched from one crisis to the next in recent decades, military funding has not been a priority for cash-strapped governments, and an incident like the disappearance of the ARA San Juan was a problem in the making, military and political analysts said.

“Human rights violations perpetrated by the dictatorship broke the bond between society and the armed forces,” said Andrei Serbin Pont, research director at the CRIES think tank in Buenos Aires. He said a rethinking of the military’s role in society was long overdue.

“The majority of Argentines don’t really care about the armed forces, therefore politicians aren’t particularly interested in maintaining any sort of military policy or defense policy,” he said.

Since the loss of the Falklands War to Britain in 1982 and the fall of the dictatorship the following year, military spending has fallen from 2.16 percent of gross domestic product (GDP) to a low of 0.87 percent in 2011, according to World Bank data.

While it inched up to 0.96 percent of GDP last year, spending remains well behind neighboring Brazil and Chile, which spent 1.3 percent and 1.9 percent of GDP on their militaries, respectively, the data show.

It is too early to determine the cause of the disappearance of the ARA San Juan, and an intense search and rescue effort continued on Wednesday. But Argentina’s submarine fleet has been among the areas of the military most plagued by a lack of funds.

In 2014, the fleet spent a total of just 19 hours submerged, versus the 190 days needed “for the fulfillment of operational and training needs,” according to a May 2016 report by specialist publication Jane’s Sentinel.

“The fact that you had so little use of the submarines was an indication that clearly they were a problem waiting to happen,” said Evan Ellis, a research professor focusing on Latin America at the U.S. Army War College Strategic Studies Institute.

‘DOES SOMEONE HAVE TO DIE?’

President Mauricio Macri pledged to improve the 26,000-strong armed forces’ capabilities during his campaign in 2015. His administration’s 2016 “State of the State” report noted that 70 percent of the Defense Ministry’s budget was spent on wages and pensions, rather than investment.

“The conditions in which they work are practically impossible. I‘m talking about all the armed forces,” Elisa Carrio, a key member of Macri’s Let’s Change coalition, said in a recent television interview.

But since taking office in December 2015, Macri has not markedly improved the financing situation. The 2018 budget calls for a 14 percent increase in funding for the Defense Ministry, below inflation expected at 15.7 percent.

The German-built ARA San Juan was launched in 1983 and underwent a local upgrade beginning in 2008 which included the replacement of its four diesel engines and its electric propeller engines, according to Jane’s Sentinel.

Shortly before giving its last location on Nov. 15, the submarine reported an electrical outage. Concerns about the state of the vessel surfaced when video was published by newspaper Perfil of a tense meeting between Macri and relatives of some of the 44 crew members.

“Does someone have to die for things to change? Could you not have invested in this before?” one sailor’s wife was recorded telling Macri.

Macri said the ship’s level of maintenance, not its age, was what mattered, and that authorities were convinced the submarine was in good condition.

Argentine news media have reported that the search has sparked friction between the navy and the defense ministry, with civilian authorities concerned that the military has not been forthcoming with information. Navy officials have denied this.

A ministry source, who was not authorized to speak publicly,  told Reuters the ministry has opened an investigation into the incident and has not ruled out criminal charges once the search operation is complete.