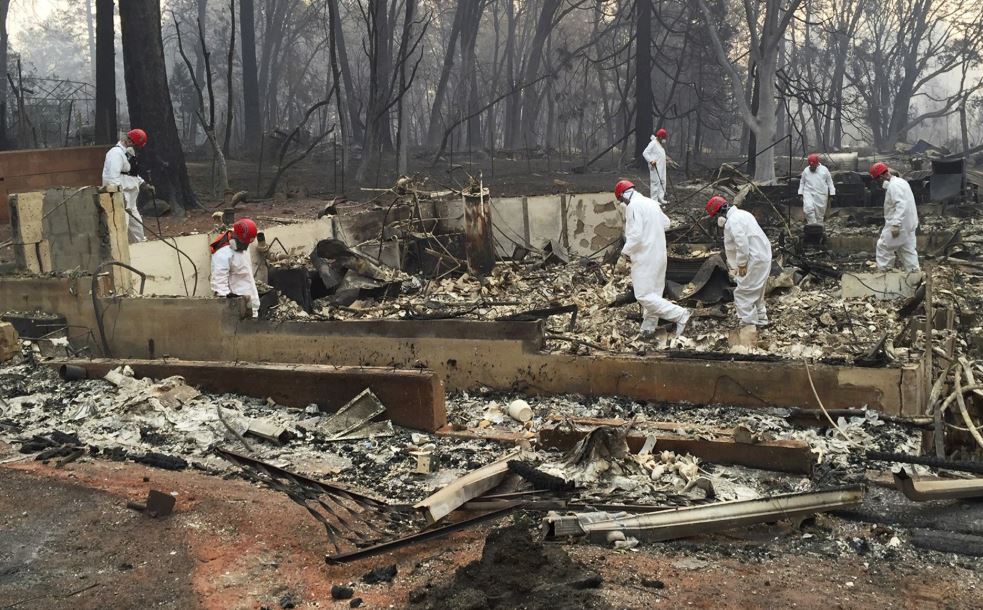 Volunteer rescue workers search for human remains in the rubble of homes burned in the Camp Fire in Paradise, Calif., Thursday, Nov. 15, 2018. Dozens of people died and perhaps several hundred are unaccounted for in the nation's deadliest wildfire in a century. (Photo: AP)

The potential magnitude of the wildfire disaster in Northern California escalated as officials raised the death toll to 63 and released a missing-persons list with 631 names on it more than a week after the flames swept through.

The fast-growing roster of people unaccounted for probably includes some who fled the blaze and do not realize they have been reported missing, Butte County Sheriff Kory Honea said late Thursday.

He said he made the list public in the hope that people will see they are on it and let authorities know they are OK.

“The chaos that we were dealing with was extraordinary,” Honea said of the crisis last week, when the flames razed the town of Paradise and outlying areas in what has proved to be the nation’s deadliest wildfire in a century. “Now we’re trying to go back out and make sure that we’re accounting for everyone.”

Rain in the forecast Tuesday night could help knock down the flames but also complicate efforts by more 450 searchers to find human remains in the ashes. In some cases, search crews are finding little more than bones and bone fragments.

Some 52,000 people have been displaced to shelters, the motels, the homes of friends and relatives, and a Walmart parking lot and an adjacent field in Chico, a dozen miles away from the ashes.

At the vast parking lot, evacuees wondered if they still have homes, if their neighbors are still alive, and where they will go from here.

“It’s cold and scary,” said Lilly Batres, 13, one of the few children there, who fled with her family from the forested town of Magalia and didn’t know whether her home was still standing. “I feel like people are going to come into our tent.”

At the other end of the state, more residents were being allowed back in their homes near Los Angeles after a wildfire torched an area the size of Denver. The 153-square-mile blaze was 69 percent contained after destroying more than 600 homes and other structures, authorities said. At least three deaths were reported.

Schools across a large swath of the state were closed because of smoke, and San Francisco’s world-famous open-air cable cars were pulled off the streets.

Anna Goodnight of Paradise tried to make the best of it, sitting on an overturned shopping cart in the Walmart parking lot and eating scrambled eggs and hash browns while her husband drank a Budweiser.

But then William Goodnight began to cry.

“We’re grateful. We’re better off than some. I’ve been holding it together for her,” he said, gesturing toward his wife. “I’m just breaking down, finally.”

More than 75 tents had popped up in the space since Matthew Flanagan arrived last Friday.

“We call it Wally World,” Flanagan said, a riff on the store name. “When I first got here, there was nobody here. And now it’s just getting worse and worse and worse. There are more evacuees, more people running out of money for hotels.”

Some arrived after running out of money for a hotel. Others couldn’t find a room or weren’t allowed to stay at shelters with their dogs or, in the case of Suzanne Kaksonen, two cockatoos.

“I just want to go home,” Kaksonen said. “I don’t even care if there’s no home. I just want to go back to my dirt, you know, and put a trailer up and clean it up and get going. Sooner the better. I don’t want to wait six months. That petrifies me.”

Some evacuees helped sort the donations that have poured in, including sweaters, flannel shirts, boots and stuffed animals. Food trucks offered free meals, and a cook flipped burgers on a grill. There were portable toilets, and some people used the Walmart restrooms.

Information for contacting the Federal Emergency Management Agency for assistance was posted on a board that allowed people to write the names of those they believed were missing. Several names had “Here” written next to them.

Melissa Contant, who drove from the San Francisco area to help, advised people to register with FEMA as soon as possible.

“You’re living in a Walmart parking lot — you’re not OK,” she told one couple.