ederal and military investigators say a soldier missing since April was killed and dismembered by a fellow soldier stationed at the same Texas base. The revelation followed demands for the Army to release details about its investigation of the disappearance. 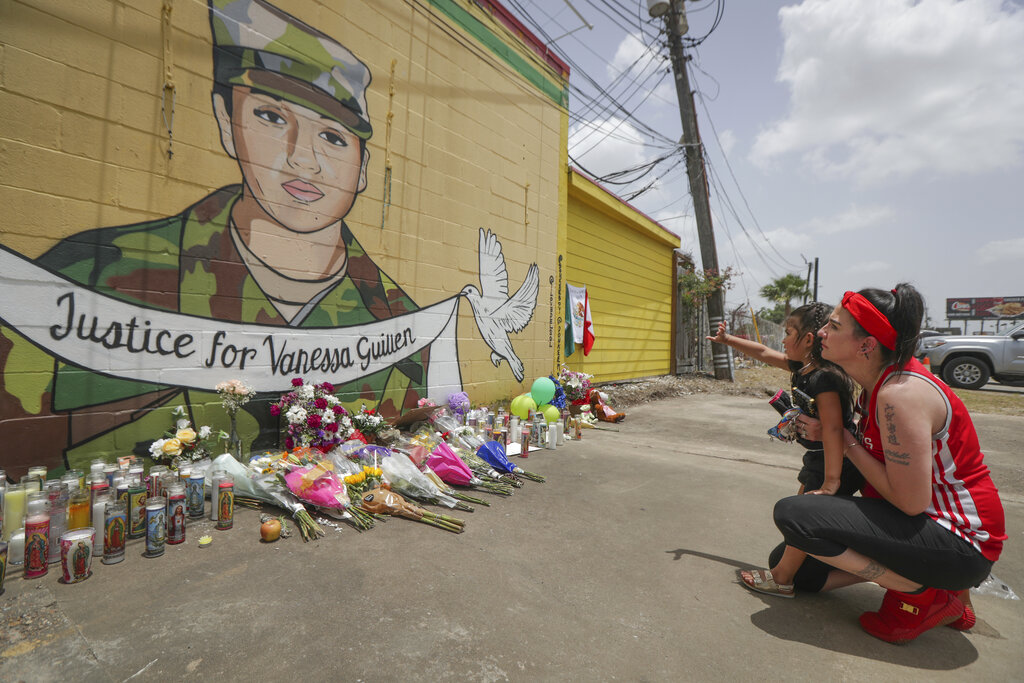 A criminal complaint released Thursday by the U.S. Attorney’s Office for the Western District of Texas charges a civilian with helping hide the body of 20-year-old solider Vanessa Guillen. The document, prepared in conjunction with the Army Criminal Investigative Command and the FBI, says the civilian helped the other soldier get rid of evidence after he bludgeoned Guillen with a hammer at Fort Hood in Central Texas and later dismembered and dumped the body.

Human remains were found Tuesday near the Leon River in Bell County, about 20 miles (32 kilometers) east of Fort Hood, in the search for Guillen. Her family said through attorney Natalie Khawam that they believe evidence shows the remains are Guillen, but authorities said they are still awaiting positive identification.

The Army said Wednesday that the soldier suspected in Guillen’s disappearance had killed himself.

At a news conference Thursday, the Army identified the soldier suspected in Guillen’s disappearance as Aaron David Robinson. Army investigators declined to comment further on the details of Guillen’s case, saying they did not want to compromise the ongoing investigation.

The criminal complaint released later Thursday said the civilian arrested in the Guillen case is Cecily Aguilar, 22, of Killeen, Texas, near Fort Hood. Aguilar faces one count of conspiracy to tamper with evidence.

Robinson enlisted Aguilar to help him dispose of Guillen’s body, according to the complaint. Aguilar later recognized Guillen, the complaint says, and helped Robinson mutilate and hide her body.

Aguilar was arrested Wednesday and was being held Thursday in the Bell County Jail in Belton, Texas, according to booking records. It was unclear whether she had an attorney to speak on her behalf.

Khawam said the U.S. Army Criminal Investigations Division told her Robinson cleaned up the area where Guillen was killed, placed her body in a container and wheeled her out to his car. After driving to pick up Aguilar, Khawam said, the pair drove to a nearby river and tried to burn Guillen's body, but later chopped it up with a machete. Then, they put cement on the body and buried the remains.

Tim Miller, of Texas Equusearch, who was assisting in the search for Guillen, told KHOU that investigators found a lid last week that belonged to a container consistent with one a witness saw loaded into a car at 8:30 the night Guillen disappeared.

Investigators were called back to the scene this week when a man working in the area reported a foul odor. Miller said it appeared the suspect “buried her, put lime on her, mixed up concrete, put that over her, put dirt over her, rocks and stuff.”

The family had said they believe Guillen was sexually harassed by the military suspect and is calling for a congressional investigation, Khawam said Wednesday.

Guillen’s older sister, Mayra Guillen, told The Associated Press on Thursday that her family was distraught after learning details about her sister’s disappearance. The family had previously said they believe the Army was covering up details of Vanessa Guillen’s disappearance.

“There are a lot of horrifying things that happened that day,” said Mayra Guillen, 22. “There are just no words.””

Army investigators said Thursday that they had no credible evidence that Vanessa Guillen had been sexually harassed or assaulted.

“We are still investigating their interactions but at this time there is no credible information for reports that specialist Robinson sexually harassed specialist Guillen,” said Fort Hood CID Special Agent Damon Phelps.

Guillen was last seen April 22 in a parking lot at Fort Hood. She was set to be promoted to specialist this month. Her car keys, barracks room key, ID card and wallet were found in the room where she was working the day she disappeared.

Authorities said Wednesday that Robinson, 20, of Calumet City, Illinois, a Chicago suburb on the Indiana border, pulled a gun and shot himself as police were trying to make contact with him.

The Army CID and the League of United Latin American Citizens offered a $50,000 reward for information leading to Guillen’s whereabouts.