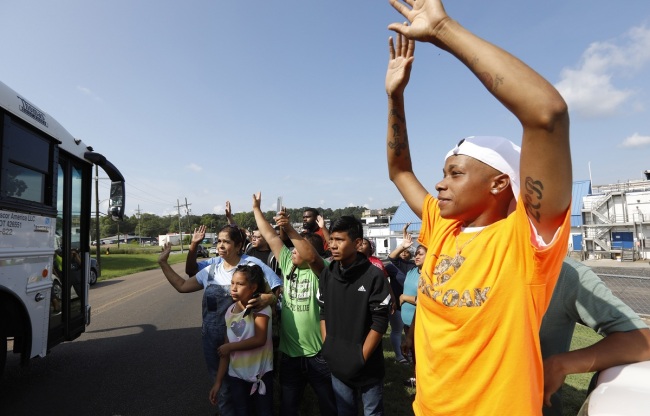 Friends, coworkers and family wave to one of several buses that are filled with detainees, following a US Immigration raid at several Mississippi food processing plants, including this Koch Foods Inc., plant in Morton, Miss., Wednesday, Aug. 7, 2019. (Photo: AP)

One of the Mississippi chicken processing plants caught in an immigration raid plans a job fair Monday.

Illinois-based Koch (cook) Foods says it will be recruiting new workers for its Morton plant at a state job center in nearby Forest.

Federal officials allege Koch was one of four companies "willfully and unlawfully" employing people who lack authorization to work in the US.

Koch, based near Chicago, said Thursday that it relies on the E-Verify program to check new hires for immigration status. Koch says it's cooperating with the investigation and is "diligent" in complying with employment laws.

The largest immigration raid in at least a decade is likely to ripple for years through six Mississippi small towns that host poultry plants.

A store owner who caters to Latino poultry plant workers fears he'll have to close. A school superintendent is trying to rebuild trust with the Spanish-speaking community. And the CEO of a local bank says the effects are likely to touch every business in town.

People are beginning to think about those consequences after Wednesday's raids, in which 680 people were initially detained.

US Immigration and Customs Enforcement spokesman Bryan Cox says ICE sent more than 300 of those people home Thursday, with notices to appear before immigration judges.

Republican Gov. Phil Bryant tweeted that anyone in the country illegally has to "bear the responsibility of that federal violation."