WORLD Mistrial declared in US case on damaged Terracotta Warrior

Mistrial declared in US case on damaged Terracotta Warrior 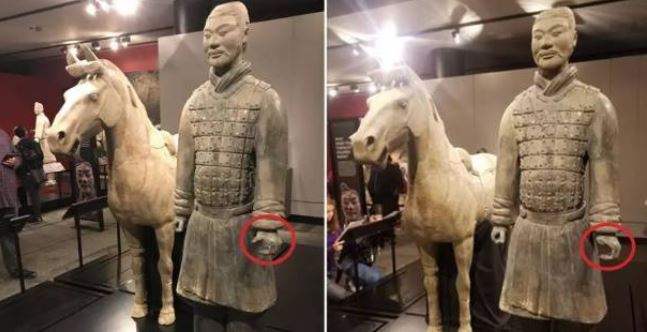 The Terracotta Warrior on display at the Franklin Institute in Philadelphia. The thumb was broken off the statue and taken away by a Delaware man on December 21, 2017. (Photo: Sina)

A judge has declared a mistrial in the case of an American man accused of stealing the thumb of a Terracotta Warrior after the jury was unable to reach a verdict on whether he was guilty of charges of theft and concealment of an object of cultural heritage.

The 25-year-old admitted to taking the thumb but said it was a stupid mistake rather than vandalism and theft. Assistant US Attorney K.T. Newton balked at Rohana's excuses, saying "Michael Rohana deliberately broke the thumb. He took it out of the Franklin Institute and he took it home. That is theft. That is stealing."

The damaged statue dates back to 210 and 209 BC and is said to be worth of 4.5 million US dollars. The stolen thumb has been returned to China but is yet to be reattached to the statue.

The US Attorney has until May 15 to decide whether to retry the case.

If convicted of the charges, Rohana faces up to 20 years behind bars.