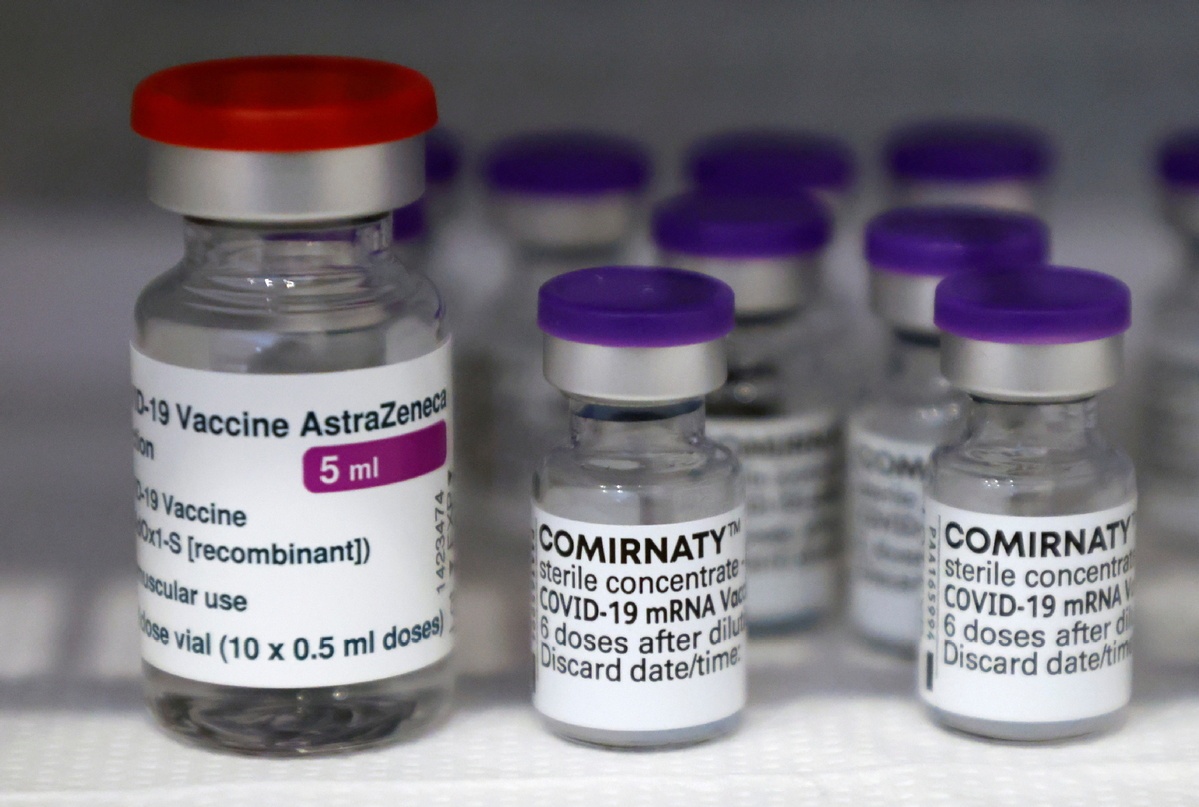 Alternating doses of COVID-19 vaccines from Pfizer and AstraZeneca provides a robust immune response against the novel coronavirus, according to a United Kingdom study which could have significant implications for global vaccine rollout.

An Oxford University-led trial of 830 volunteers showed that a mixed schedule of the vaccines induced high concentrations of antibodies against the COVID-19 spike protein when doses were administered four weeks apart, researchers said in a study published on The Lancet's preprint server.

The results are noteworthy since the ability to combine different vaccines would provide health authorities with greater flexibility in inoculation campaigns, allowing them to work around supply shortages or regulations that interrupt distribution. In the UK, where vaccination coverage is already high, a mixed schedule could help speed up the nation's booster campaign, which is gearing up to deliver third doses to people who received vaccines early on.

"Our non-mixed vaccination program has already saved tens of thousands of lives across the UK but we now know mixing doses could provide us with even greater flexibility for a booster program, while also supporting countries who have further to go with their vaccine rollouts and who may be experiencing supply difficulties," said UK Deputy Chief Medical Officer Jonathan Van-Tam.

A real-world example of the benefits of a mixed schedule played out in Spain over the spring. Spanish authorities had paused the rollout of the AstraZeneca jab due to a possible association with rare blood clots, leaving nearly 2 million people who had already received one shot questioning whether they would get a full course. In late May, scientists at the Carlos III Health Institute in Madrid published a study that found that a mixed schedule of AstraZeneca followed by Pfizer produced a strong immune response, and Spain's health department authorized the use of Pfizer jab to complete courses among the partially vaccinated.

Participants were given shots four weeks apart, and results from a study that uses a 12-week interval are forthcoming, researchers said. Matthew Snape, associate professor of vaccinology at Oxford University, said that a longer interval is normally associated with a stronger immune response from the AstraZeneca jab.

Andrew Ustianowski, who is clinical lead for the UK National Institute for Health Research's COVID-19 Vaccination Program, said the data could have ramifications well beyond the UK.

"We know that the Oxford-AstraZeneca two-dose schedule is highly effective and has helped to save many lives," Ustianowski said. "The fact we now know it works well, in terms of immune responses, when combined with the Pfizer vaccine provides researchers with the valuable knowledge that these vaccines could be used flexibly for those yet to be vaccinated in the UK and globally."