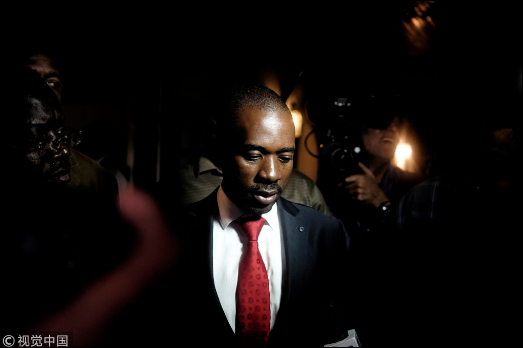 Freedom of speech is "an indispensable part of the new Zimbabwe," the country's newly re-elected President Emmerson Mnangagwa said Friday, criticizing earlier scenes where police chased away journalists waiting for a briefing by his main rival in this week's vote.

"The scenes today at the Bronte Hotel have no place in our society and we are urgently investigating the matter to understand exactly what happened," Mnangagwa wrote on Twitter.

"We won the election freely and fairly, and have nothing to hide or fear. Anyone is free to address the media at any time," he added.

"We won this election and we are ready to form the next government," Chamisa told a press conference after President Mnangagwa of the ruling ZANU-PF was declared the victor with 50.8 percent of the vote.

Chamisa said he would pursue all legal means necessary to challenge the result, which had serious credibility and legitimacy problems.

"I thought the force of will would prevail over will of force," the leader said in a tweet, without elaborating.