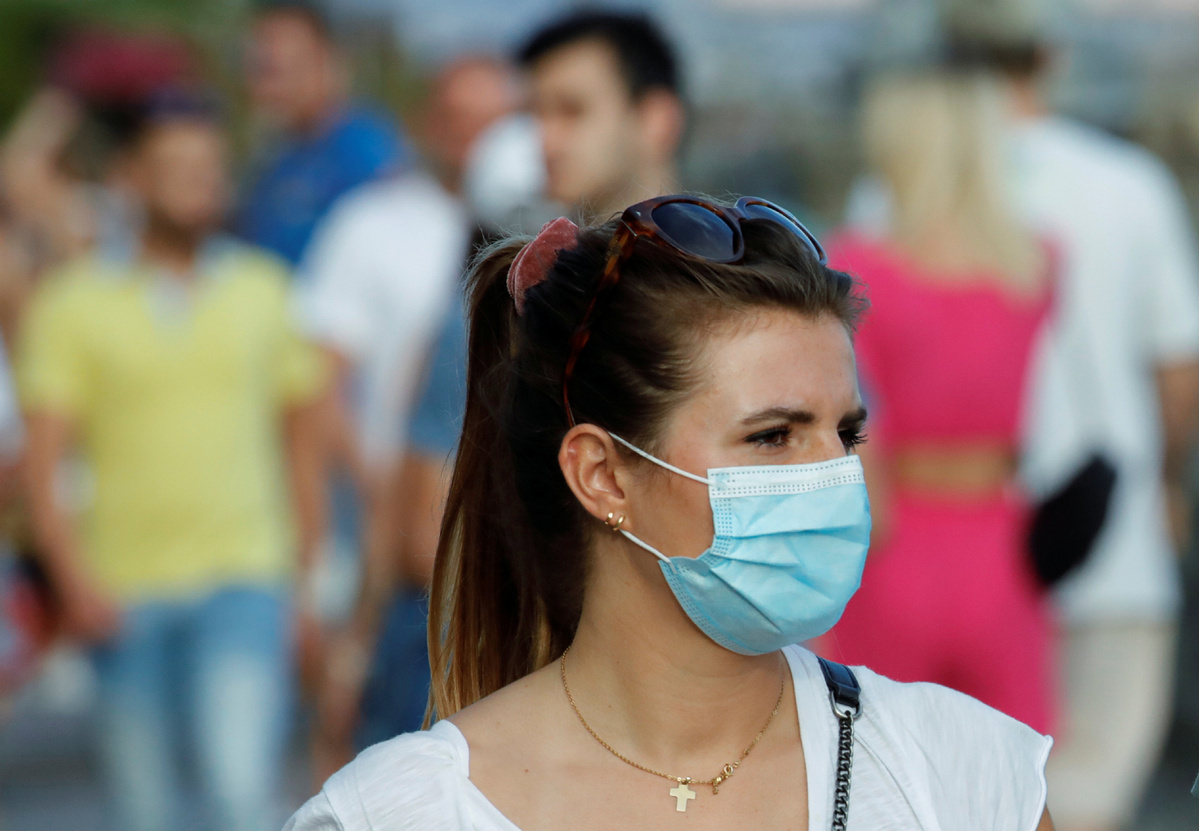 A woman wears a mask as she walks on the street following a government decree that face coverings must be worn between 6 pm and 6 am in areas close to bars and pubs and where gatherings are more likely, due to the coronavirus disease (COVID-19) outbreak, in Naples, Italy, August 17, 2020. [Photo/Agencies]

ROME - Italy registered a moderate slowdown in the daily number of new coronavirus cases on Monday, as authorities warned the country's top priority was to reopen schools in September in the best safety conditions.

On the same day, a new government's decree ordering the temporary closure of all discos across the country entered into force.

Some 320 new cases were registered over the past 24 hours against 479 in the previous day, according to the latest statistics provided by the country's Health Ministry.

The central Lazio region surrounding Rome (51) had the highest increase, along with northeast Veneto (46) and northwest Lombardy (43).

Active infections rose by 134 to total 14,867. The large majority of them are people currently isolated at home, while 810 patients are hospitalized, and 58 in intensive care (up by 23 cases and 2 cases, respectively).

Four fatalities were also registered on a daily basis, bringing the country's death toll to 35,400 since the pandemic broke out in the northern regions in late February, data showed.

As 182 more people recovered, the number of people cured grew to 203,968. Considering active infections, recoveries, and fatalities, the total of assessed cases stood at 254,235.

Meanwhile, all dancing activities outdoor and indoor taking place in discos, dancing clubs, and any other locations open to the public (including beaches) were halted on Monday, following a specific decree passed by the Italian government on Sunday.

The suspension will remain in place until Sept. 7.

The decree also reintroduced the obligation for people to wear face masks outdoors from 6 p.m. to 6 a.m. "in all the places where there is a risk of gatherings, even spontaneous or casual."

This would apply to both city squares and seafronts across the country, for example.

The decree specified that regional governments were allowed to introduce further measures, but "only if more restrictive."

"The numbers referring to the contagion in Italy... are growing, and we cannot undo the sacrifices we all have made over the past few months," Health Minister Roberto Speranza said on Monday in a statement.

"Our priority must be to reopen our schools in September in complete safety," he said.

On the same lines sounded Franco Locatelli, president of Italy's Higher Health Council and member of the technical-scientific committee counseling the cabinet in the coronavirus emergency.

"We are going to reopen schools at any cost," Locatelli told Italian newspaper Il Corriere della Sera in an interview earlier in the day.

"Infections are increasing, but we are still ahead (of the virus spreading) and we can contain the pandemic."

The scholar explained up to 40 percent of the new cases were "imported" by Italians returning from traveling abroad (or foreigners residing in the country).

On Aug. 12, after a deal with regional governments, the cabinet introduced mandatory COVID-19 tests on people returning from Greece, Spain, Malta, and Croatia in the place where they arrive (airport, port, train station), or in the 48 hours after their arrival.

The measure was launched following several confirmed cases of people returning from the above-mentioned European countries and developing the infection. Many of these are young Italians spending their holidays abroad.