US firm Moderna said it would file requests for emergency authorization of its COVID-19 vaccine in the United States and Europe on Monday, after full results confirmed a high efficacy estimated at 94.1 percent. 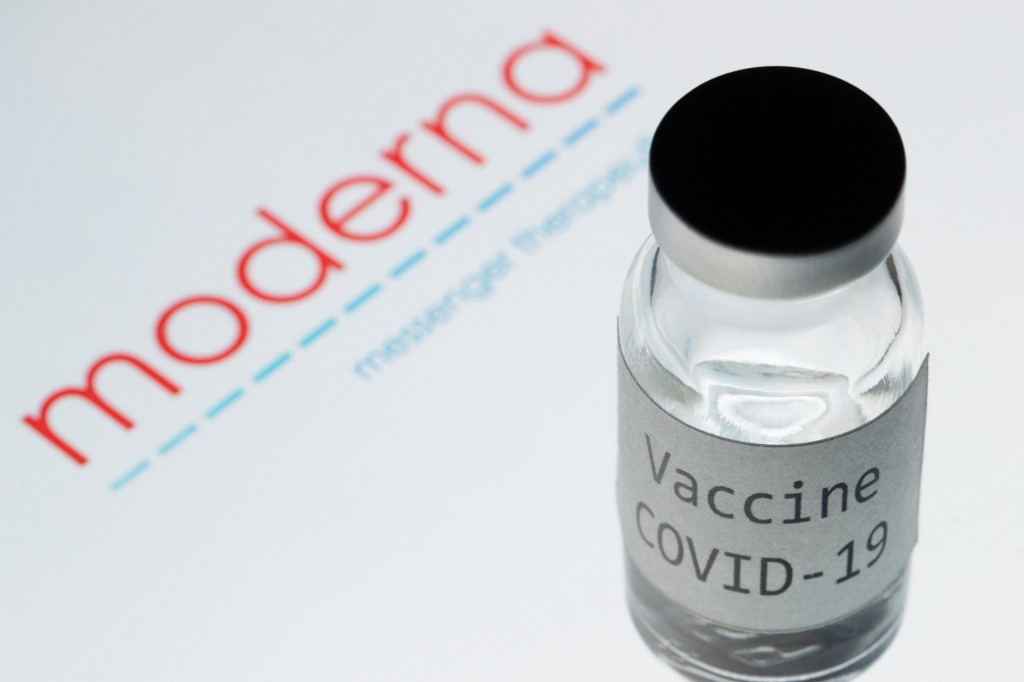 In this file photo taken on November 18, 2020 shows a syringe and a bottle reading "Vaccine COVID-19" next to the Moderna biotech company logo. (File photo: AFP)

The highly-anticipated news comes as the US braces for a supercharged post-Thanksgiving coronavirus surge.

More than 265,000 Americans have died from the disease and 93,000 are currently hospitalized.

"We believe that our vaccine will provide a new and powerful tool that may change the course of this pandemic and help prevent severe disease, hospitalizations and death," said the company's CEO Stephane Bancel.

If the US Food and Drug Administration agrees it is safe and effective, the first of the drug's two doses could be injected into the arms of millions of Americans by the middle of December.

American pharmaceutical Pfizer and Germany's BioNTech applied for similar approvals last week, and their vaccine could be greenlit in the US shortly after December 10.

The Moderna vaccine, which was co-developed with the US National Institutes of Health, is being studied in a clinical trial with more than 30,000 participants across the United States.

An interim analysis announced earlier this month was based on 95 patients who fell sick with COVID-19.

The final analysis was based on 196 cases, 185 of which were observed in a group assigned a placebo versus 11 who received the shots.

Thirty people had severe cases -- all of whom were in the placebo group -- which also included one person who died.

Significantly, efficacy was uniform across age, race, ethnicity and gender, the company said.

The 196 COVID-19 cases included 33 adults over the age of 65, and 42 participants identifying as being from diverse communities (including 29 Hispanic, six Black, four Asian Americans and three multiracial participants).

The vaccine was generally well tolerated, with the most common side effects including injection site pain, fatigue, muscle pain, joint pain, headache, and redness at the site.

These increased in frequency and severity after the second dose in the vaccinated group.

Outside experts welcomed the new results, particularly the absence of any severe COVID-19 cases in the vaccine group.

"Prevention of severe disease and hospitalization can be expected to significantly reduce pressure on overstretched health services, provided that a sufficient proportion of the high risk population can be vaccinated," said Penny Ward, a visiting professor in pharmaceutical medicine at King's College London.

Both the Moderna and Pfizer vaccines are based on a new technology that uses mRNA (messenger ribonucleic acid) to deliver genetic material to the body that makes human cells create a protein from the virus.

This trains the immune system to be ready to attack if it encounters SARS-CoV-2.

Moderna said it expects to have approximately 20 million doses of the vaccine, called mRNA-1273, available in the US by the end of the year.

It also expects to manufacture 500 million to 1 billion doses globally in 2021.

Top US scientist Anthony Fauci warned on Sunday of a "surge upon a surge" in COVID-19 cases after millions of Americans travelled and socialized over the Thanksgiving holiday.