WORLD Moldova vote pits pro-Moscow, West forces against each other

Moldova vote pits pro-Moscow, West forces against each other 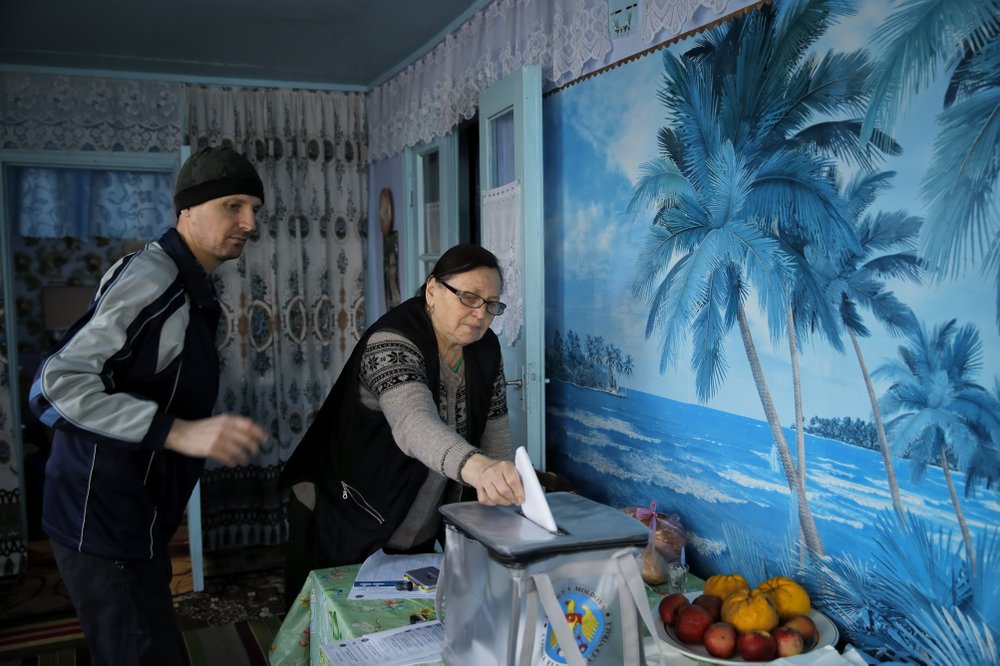 A woman casts her vote in a mobile ballot box in the village of Stolniceni, Moldova, Sunday, Feb. 24, 2019. Moldovans voted Sunday in a parliamentary election that could deepen the split between pro-Western and pro-Russian forces in the former Soviet republic. (Photo: AP)

Moldovans voted Sunday in a parliamentary election that could deepen the split between pro-Western and pro-Russia forces in the former Soviet republic.

The election in Moldova, a small landlocked nation between Romania and Ukraine, comes as the Democratic Party’s ruling alliance has lost support over rampant corruption, falling living standards and the erosion of democracy.

The vote is a three-way contest between the broadly pro-Russia opposition Socialists, whose former leader Igor Dodon became Moldova’s president in 2016, the Democrats and a pro-European group, ACUM.

More than 3 million voters can choose representatives for the next four years to the 101-seat legislature. No party is expected to win an outright majority and parties need to win 6 percent of the ballot to enter Parliament. The first results are expected Monday.

Election authorities put voter turnout at 46.5 percent after 11 ½ hours of voting, slightly lower than for the 2014 parliamentary election.

Dodon on Sunday forecast another election in the coming months.

“We have a major risk of early elections,” he said after casting his vote.

If lawmakers fail to form a coalition 45 days after the election result, the president dissolves the legislature and calls a new vote.

ACUM party leader Maia Sandu told The Associated Press that the election was “the most undemocratic in the history of Moldova.”

“A gang of thieves ... has captured the state institutions” and are “scaring ... threatening and impoverishing us,” Sandu said Sunday as she urged Moldovans to vote.

One voter, Svetlana Druta, said she had voted to change the judicial system.

“We need to start from the top and then (change) elementary schools and kindergartens, and then we need a good health” system, she said.

Last year, the European Parliament called Moldova “a state captured by oligarchic interests.” The European Union also froze aid to Moldova after a local court invalidated the 2018 Chisinau mayoral election on a technicality, a move to thwart the apparent victory of a pro-European candidate.

But Vladimir Plahotniuc, the Democratic Party chief and the country’s de-facto leader, on Sunday insisted the ruling party had brought “order and discipline” through its economic policies.

Despite that claim, an estimated 1 million Moldovans have moved abroad to find jobs, mainly in the EU and Russia.

Moldova’s voting system has been changed in what critics say is a ploy to help the two main parties — the Socialists and the Democrats — carve up influence.

About 340 international observers from 38 countries are monitoring the ballot.