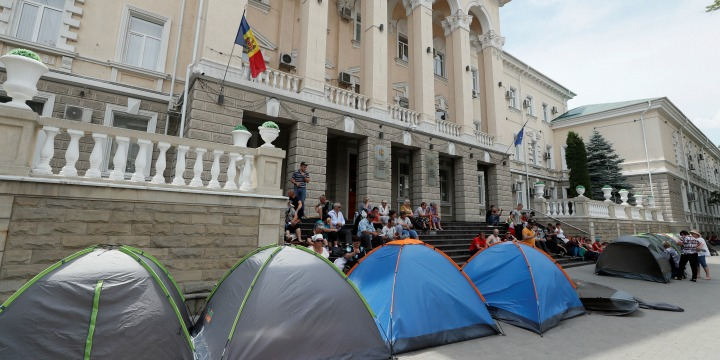 Supporters of the Democratic Party of Moldova hold a rally outside the Interior Ministry headquarters in Chisinau, Moldova on June 11, 2019. (Photo: CGTN/Reuters)

Moldova's new Prime Minister Maia Sandu on Saturday asked the Constitutional Court judges to submit their resignations immediately, even though the latter annulled all the decisions against the parliament and her cabinet.

The prime minister accused the judges of "continuing their delirium by shaming the institution they represent nationally and internationally."

She stressed that the top court had to "acknowledge that it participated in the desperate attempt of the Democratic Party to remain at power illegally."

"I qualify this approach as inadmissible from the point of view of respect for the Supreme State Law. The Constitutional Court must adopt acts in accordance with the provisions of the letter and the spirit of the Constitution, and not based on the decisions and behavior of the political actors in the country," the new prime minister wrote on her social media account.

Moldova's Constitutional Court announced earlier in the day to annul its recent decisions, among which the one not recognizing the government of Maia Sandu.

According to the court, "at the base of cancellation was the real situation in Moldova, especially the announcement of transfer of power to Government of Prime Minister, Maia Sandu, and of coalition formed in the Parliament of Moldova."

Saturday's judgment "is meant to be a source of social peace, rule of law, democracy as well as a safeguard of a proper framework of human rights protection, by combating a political crisis of great magnitude," said the top court on its website.

The top court's move was a positive response to the relevant presidential appeal on Friday after the cabinet controlled by the Democratic Party decided to step down.

The political situation in Moldova underwent dramatic changes last Saturday when the Socialists and ACUM alliance, which signed a coalition agreement to form a parliamentary majority, convened a special parliamentary session, at which their deputies elected Socialists' leader Zinaida Greceanii as president of Parliament and approved a new government led by Maia Sandu, leader of the ACUM alliance.

The Constitutional Court accepted the contests of the ruling Democratic Party and ruled that the election of Greceanii as the parliament's speaker, as well as the formation of the new government were unconstitutional, just as the other decisions made by the national legislature starting from June 8, when the parliament must be dissolved according to a ruling released a day before by the top court on terms of parliament's dissolution.

Not only that, the top court on Sunday suspended President Igor Dodon for his refusal to dissolve the parliament and named Prime Minister Filip as acting president.

Filip immediately announced to dissolve the parliament and call snap elections on September 6.

However, at the time of serious confrontation between the two sides, the European Union (EU) issued a statement on Sunday afternoon to explicitly support the newly-formed coalition government. The EU statement was soon echoed by Russia, Germany and other major European states.