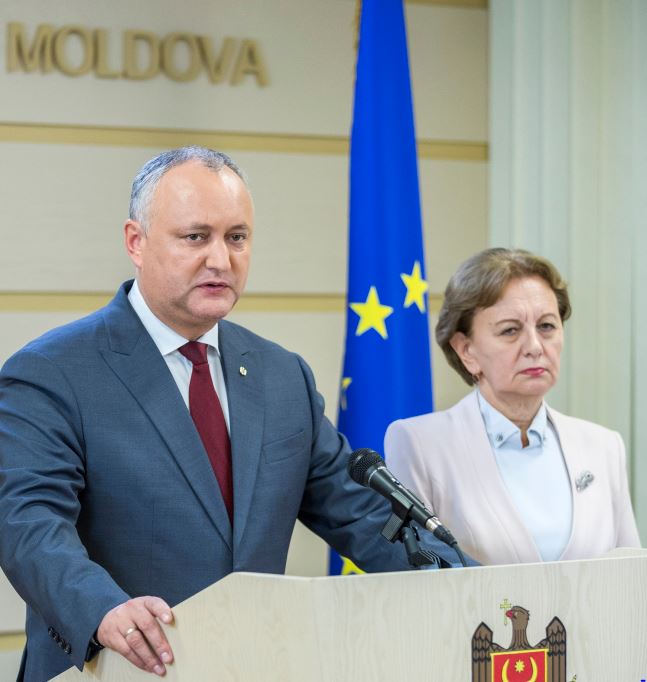 The President of Moldova Igor Dodon (L) speaks at a briefing with Speaker of Parliament Zinaida Grecianii (R) at the Parliament building in Chisinau, Moldova, 14 June 2019. (Photo: IC)

Moldovan President Igor Dodon announced on Saturday the end of the week-long political and constitutional crisis in the country, soon after the top court annulled its recent decisions regarding the parliament and the government.

Moldova's Constitutional Court on Saturday announced to annul some recent decisions, among which the one to dissolve the parliament and not recognizing the government of Maia Sandu.

The top court's move was a positive response to the relevant presidential appeal on Friday after the incumbent cabinet decided to step down from power.

The political situation in Moldova underwent dramatic changes last Saturday when the Socialists and ACUM alliance, which signed a coalition agreement to form a parliamentary majority, convened a special parliamentary session, at which their deputies elected Socialists' leader Zinaida Greceanii as president of Parliament and approved a new government led by Maia Sandu, leader of the ACUM alliance.

The Constitutional Court accepted the contests of the ruling Democratic Party and ruled that the election of Greceanii as the parliament's speaker, as well as the formation of the new government were unconstitutional, just as the other decisions made by the national legislature starting from June 8, when the parliament must be dissolved according to a ruling released a day before by the top court on terms of parliament's dissolution.

Not only that, the top court on Sunday suspended President Igor Dodon for his refusal to dissolve the parliament and named Prime Minister Filip as acting president.

Filip immediately announced to dissolve the parliament and call snap elections on Sept. 6.

However, at the time of serious confrontation between the two sides, the European Union (EU) issued a statement on Sunday afternoon to explicitly support the newly-formed coalition government. The EU statement was soon echoed by Russia, Germany and other major European states.