WORLD Momentum grows for closing gaps in US vaccine requirements

Momentum grows for closing gaps in US vaccine requirements

A law adopted this week in Connecticut adds momentum to the push to strengthen vaccination requirements for schoolchildren, but efforts to give families more leeway are brewing in statehouses around the country in debates that go back more than a century. 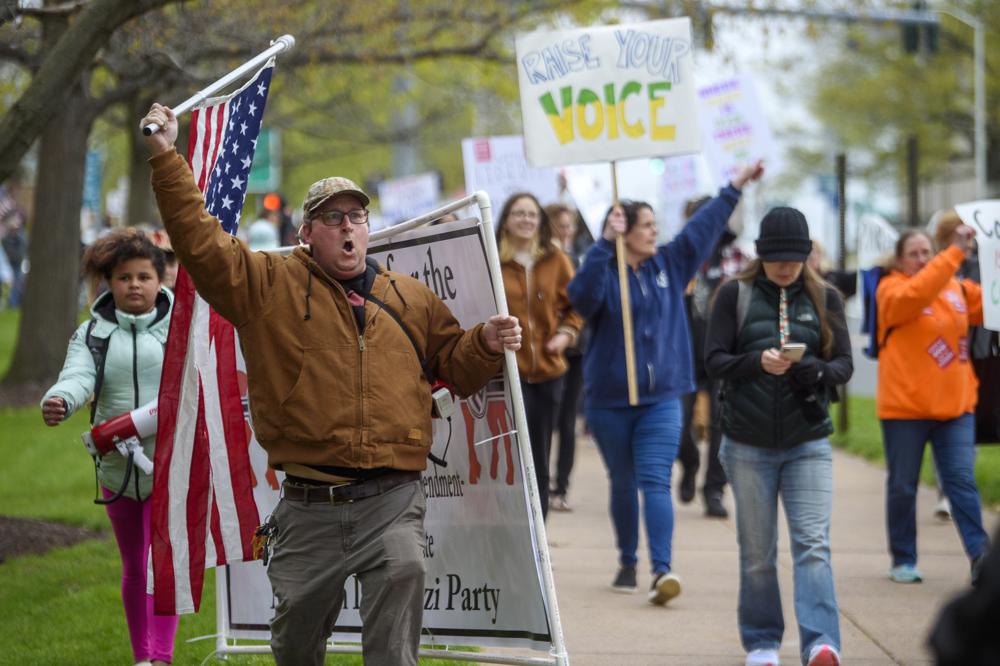 The arguments over mandates, and when to allow exceptions, are expected to become more heated as authorities decide what expectations should be for COVID-19 vaccinations once they are approved for young children.

Religious exemptions like the one eliminated by Connecticut's new law are facing particular scrutiny amid fears of new measles outbreaks and concerns the growing number of families claiming religious exemptions for their children are opposed because of scientifically discredited claims about the dangers of vaccines. Leaders of Islam, Judaism and major Christian religions say vaccination is consistent with their belief systems.

"The truth is there is no major religion that prohibits vaccinations," said Peter Hotez, dean of the National School of Tropical Medicine at Baylor College of Medicine. "The argument has really very little to do with religion and everything to do with the anti-vaccine, vaccine choice movement."

Proposals to expand or limit immunization exemptions pop up every year in state legislatures, although it's rare for any to win passage. Nationwide, the National Conference of State Legislatures, or NCSL, is currently tracking about 270 bills related to childhood immunizations.

The debates often do not break down along traditional political divides, according to Robert Bednarczyk, a professor at Emory University's Rollins School of Public Health.

"I do think when you see vaccine refusal, it really does run across the population," he said. "Regardless of the reason, the endpoint is always the same. It's children that are being left unprotected from infectious diseases."

For as long as there have been vaccination requirements, there has been pushback.

In Massachusetts, a Lutheran minister in 1902 refused to comply with a mandate by the Cambridge Board of Health for all adults to get smallpox vaccinations. The U.S. Supreme Court in 1905 upheld the state's mandatory policy, and in 1922 upheld a school system's power to refuse admission to students who failed to heed a vaccination order.

Gradually, statewide vaccination mandates took hold in every state. In 1966, however, as New York lawmakers were considering a vaccination requirement for schoolchildren, it became the first state to include a religious exemption in its law. Christian Scientists were among the main advocates of the exemption, arguing that the requirement violated their belief in prayer rather than medical treatment.

Other states followed New York's example; before long there were only two states that didn't provide a religious exemption. Some state laws said the exemptions could be claimed only by people who belonged to an organized or established religion. Other policies were looser, allowing a child to be exempt based on the individual family's religious beliefs.

In recent years, the momentum has shifted. California decided in 2015 to get rid of its religious exemption following a measles outbreak in Disneyland. Maine and New York have taken similar steps, joining West Virginia and Mississippi. Connecticut Gov. Ned Lamont, a Democrat, signed his state's new law eliminating the religious exemption on Wednesday.

Forty-four states and the District of Columbia currently allow religious exemptions to immunizations, while 15 states also permit philosophical exemptions for children whose parents object due to personal, moral or other beliefs, according to the NCSL.

A spokesperson for the Christian Science church in Connecticut, Linda Ross, testified against the measure that scrapped the state's exemption. She suggested the exemption could be left in place, but with stricter policies allowed temporarily for schools with worrisomely low vaccination rates.

"Christian Scientists don't view vaccination as something to fear or get out of, but generally prefer the greater sense of health, protection and well-being they find through their Bible-based religious practice," she said in written testimony.

Two groups that oppose the new Connecticut law are planning to challenge it in court.

"The notion that somehow the state government gets the right to cram its version of virtue down the throats of every citizen in this state is and ought to be offensive to every Connecticut resident," said Norm Pattis, an attorney representing the organizations.

The pandemic is having an influence on the vaccine debate. In Kentucky, which already has religious and other exemptions to childhood vaccinations, state lawmakers approved a bill that would bar health officials during pandemics from requiring vaccinations for the pandemic diseases. The legislation was signed by the governor in March.

Kentucky state Sen. Mike Wilson, a Republican from Bowling Green who sponsored the bill, said his office received many phone calls and emails from constituents who were leery of the COVID-19 vaccines and didn't want state officials to order them to get vaccinated.

"It's enough to make you stop and say, 'You know what? We have exemptions for other areas. We don't have one for this,'" Wilson said. "They don't want to be mandated to take it."

"I don't think it's necessarily going to be a different set of issues or circumstances," he said. "But I think that it probably will get a lot more attention because everything around COVD-19 has garnered more attention."