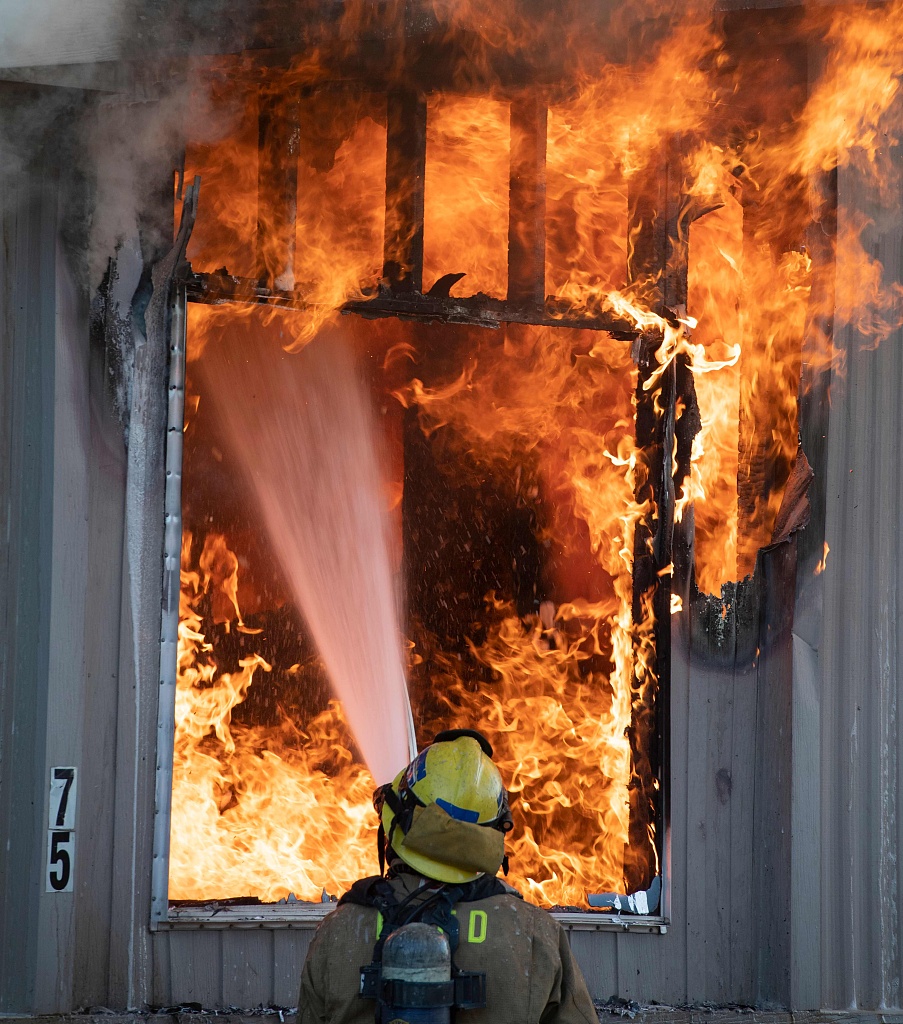 RIDGECREST, Calif. — Officials in Southern California expressed relief Saturday that damage and injuries weren't worse after the largest earthquake the region has seen in nearly 20 years, while voicing concerns about the possibility of major aftershocks in the days and even months to come.

No fatalities or major injuries were reported after Friday night's 7.1-magnitude earthquake, which jolted an area from Sacramento to Mexico and prompted the evacuation of the Navy's largest single landholding, Naval Air Weapons Station China Lake in the Mojave Desert.

The quake struck at 8:19 pm Friday and was centered 11 miles (18 kilometers) from Ridgecrest, the same area of the desert where a 6.4-magnitude temblor hit just a day earlier. It left behind cracked and burning buildings, broken roads, obstructed railroad tracks and leaking water and gas lines.

The light damage was largely due to the remoteness of the area where the tremble occurred. Only 28,000 people live in the Ridgecrest area, which is sandwiched between more populated areas of Southern California and Las Vegas' Clark County. But seismologists warned that the area could see up to 30,000 aftershocks over the next six months.

April Hamlin said she was "already on edge" when the second quake rattled her Ridgecrest home. She and her three kids initially thought it was another aftershock.

"But it just kept on intensifying," she said. "The TV went over, hanging by the cord. We heard it break. We heard glass breakage in the other rooms, but all we could do was stay where we were until it stopped." 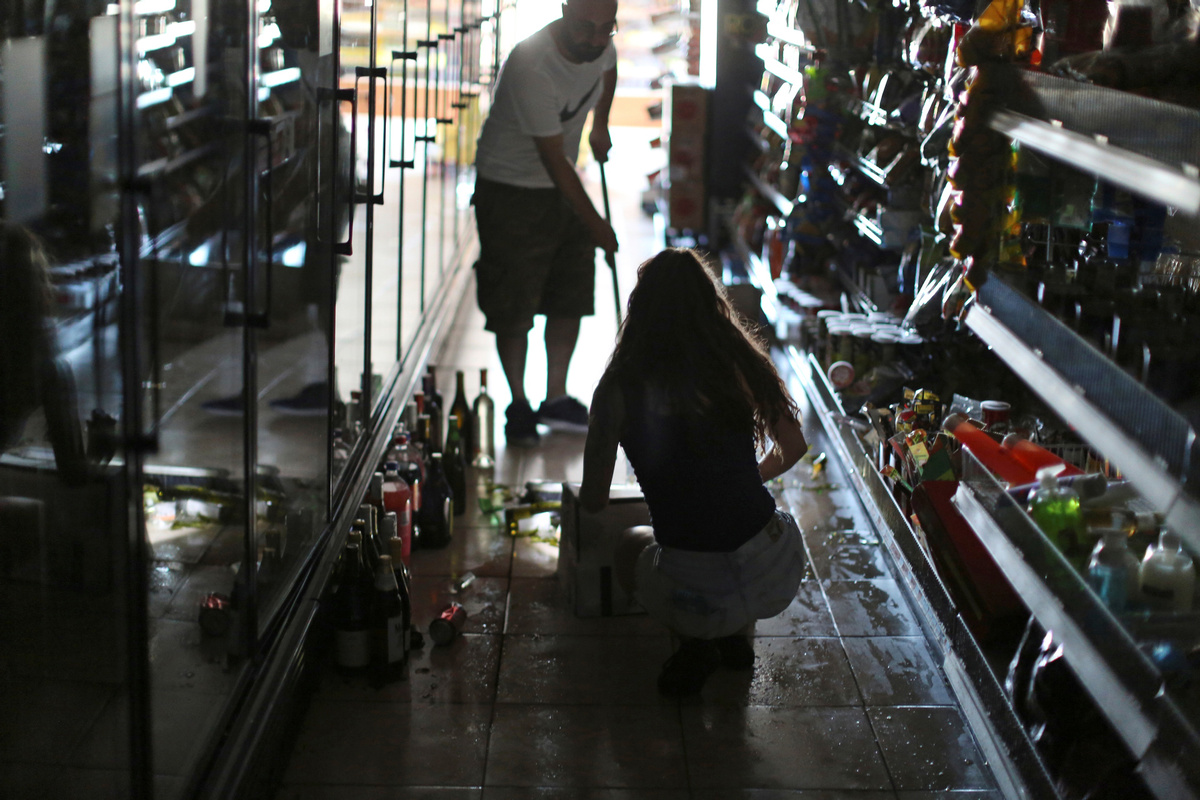 People clean up broken bottles at the 1 Stop Market liquor store, after a powerful earthquake struck Southern California in the city of Ridgecrest, California, US, July 4, 2019. (Photo: Agencies)

With the possibility of aftershocks and temperatures forecast to reach 100 degrees (38 Celsius) over the next several days, officials were taking precautions.

The California National Guard was sending 200 troops, logistical support and aircraft, said Maj. Gen. David Baldwin. The Pentagon had been notified, and the entire California Military Department was put on alert, he said.

The epicenters of both quakes were on the base, and officials said they are continuing to asses damage.

Officials said most employees live off the base, but they authorized the evacuation so those who live on base can be eligible for reimbursements.

The California Office of Emergency Services brought in cots, water and meals and set up cooling centers in the region, Director Mark Ghilarducci said.

State highway officials shut down a 30-mile (48-kilometer) section of State Route 178 between Ridgecrest and the town of Trona southwest of Death Valley, due to a rockslide and severe cracking. 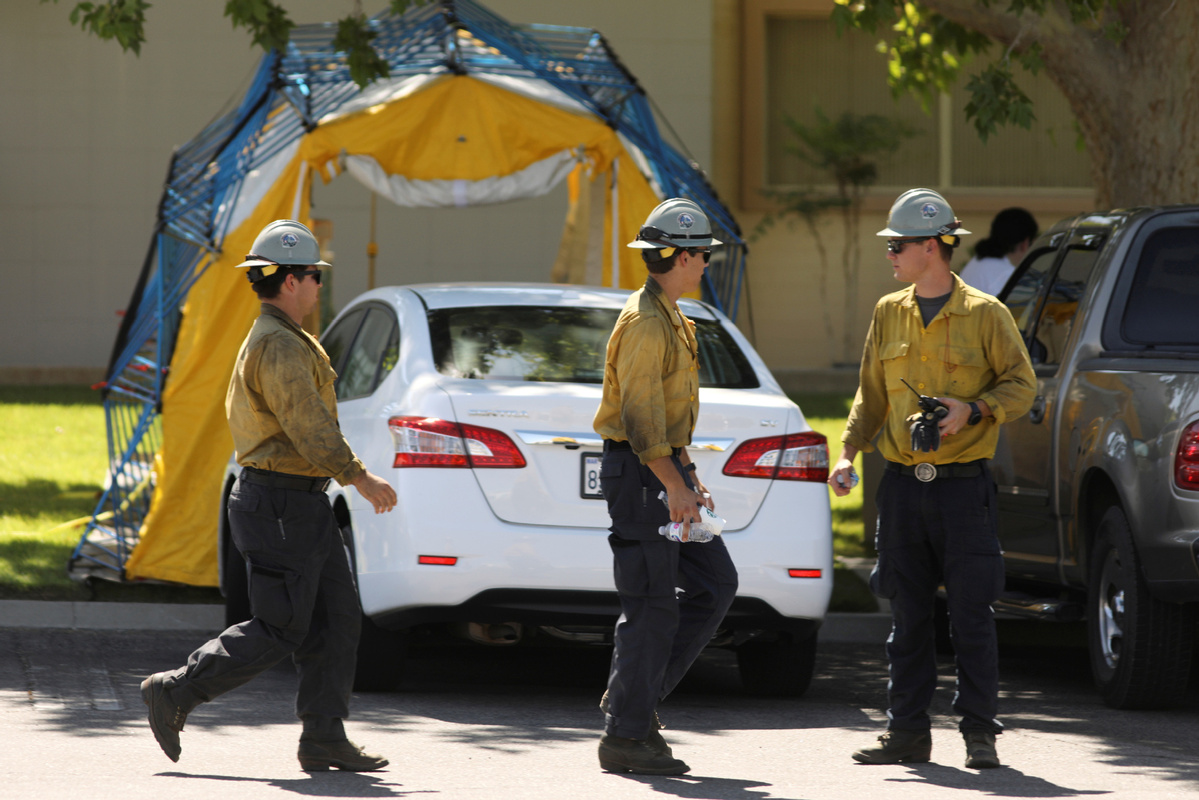 Wildland firefighters pass by hospital equipment being set up outside the Ridgecrest Regional Hospital after a powerful earthquake struck Southern California in the city of Ridgecrest, California, US, July 4, 2019. (Photo: Agencies)

The move left Trona temporarily cut off. California Department of Transportation spokeswoman Christine Knadler said crews worked through the night to patch the roadway, but it remained rough and uneven.

Ron Mikulaco, 51, and his nephew, 23-year-old Brad Fernandez, stood on 178 on Saturday looking at the cracks.

The pair drove from Huntington Beach, some 170 miles (274 kilometers) southwest of Ridgecrest. Mikulaco, an amateur geologist, wanted to show his nephew "the power of Mother Nature," and they had the epicenter's latitude and longitude coordinates ready.

"We put that in the GPS and we'll get as close as we can," Fernandez said.

In Ridgecrest, local fire and police officials said they were initially swamped by calls for medical and ambulance service. But police Chief Jed McLaughlin said there was "nothing but minor injuries such as cuts and bruises, by the grace of God." 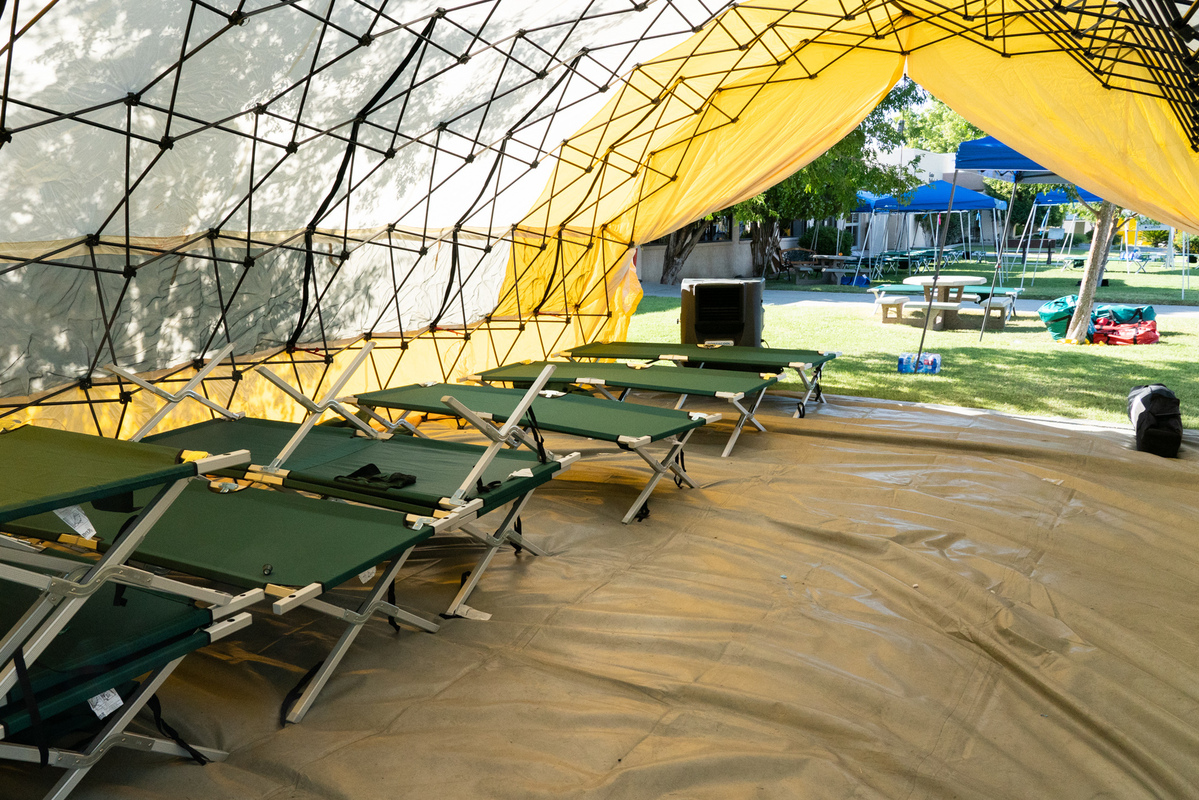 Tents are set up in the town of Ridgecrest, California after Friday night's 7.1-magnitude earthquake, July 4, 2019. (Photo: Xinhua)

Two building fires — one involving a mobile home — were quickly doused, McLaughlin said, and natural gas lines where leaks were reported were shut off.

In Trona, a town of about 2,000 people considered the gateway to Death Valley, fire officials said up to 50 structures were damaged.

Julia Doss, who maintains the Trona Neighborhood Watch page on Facebook, said the only food store in town is a Family Dollar store that was shuttered Saturday.

"The only way to get food is to drive to Ridgecrest, and with only three gas stations in town I'm worried we may soon run out of fuel," Doss said. 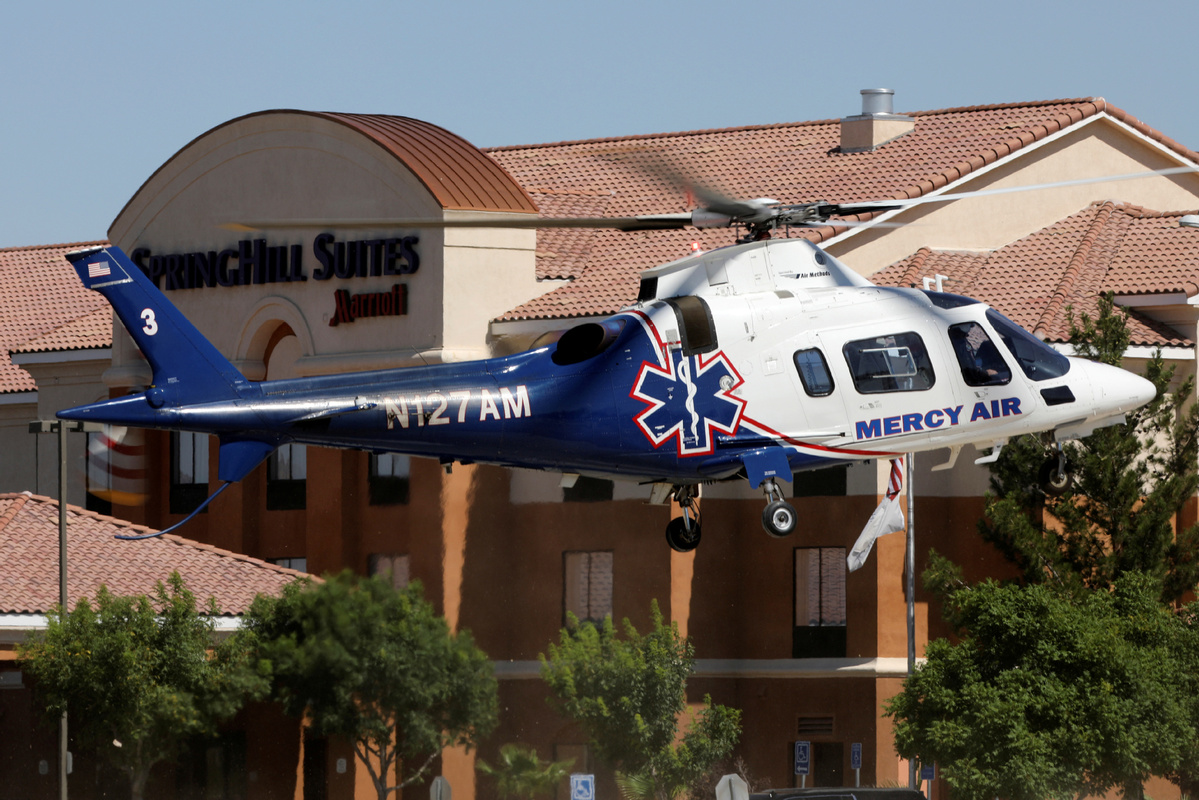 A medical helicopter takes off from a field next to a hotel across the street from Ridgecrest Regional Hospital, after a powerful earthquake struck Southern California in the city of Ridgecrest, California, US, July 4, 2019. (Photo: Agencies)

Antoun Abdullatif, 59, owns liquor stores and other businesses in Ridgecrest and Trona.

But he has stopped cleaning up, believing another earthquake is on the way.

Lucy Jones, a seismologist at the California Institute of Technology and a former science adviser at the US Geological Survey, said the new quake probably ruptured along about 25 miles (40 kilometers) of fault line and was part of a continuing sequence.

The seismic activity is unlikely to affect fault lines outside of the area, Jones said, noting that the gigantic San Andreas Fault is far away.

Egill Hauksson, another Caltech seismologist, said later in the day that scientists believe the continuing sequence could produce more than 30,000 quakes of magnitude 1 or greater over six months.

He said the probability of a magnitude 7 over the next week is about 3%, but one or two magnitude 6 quakes are expected.