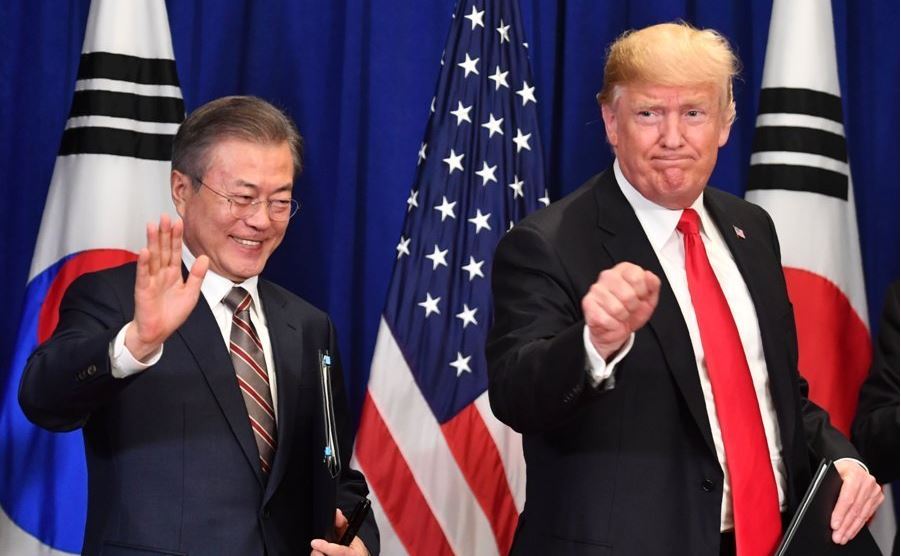 US President Donald Trump (R) and South Korean President Moon Jae-in gesture after signing a trade agreement at a bilateral meeting in New York on September 24, 2018, a day before the start of the General Debate of the 73rd session of the General Assembly. (File Photo: Xinhua/AFP)

SEOUL, Feb. 19 (Xinhua) -- South Korean President Moon Jae-in said in his phone talks with US President Donald Trump Tuesday night that his country was ready to assume any role for the denuclearization of the Korean Peninsula.

Moon and Trump had a phone conversation for around 35 minutes at 10 p.m. local time (1300 GMT), according to the presidential Blue House.

The leaders intensively discussed ways to cooperate for the success of the upcoming second summit between the Democratic People's Republic of Korea (DPRK) and the United States.

During the phone conversation in about five months, Moon highly evaluated Trump's diplomatic efforts for peace on the Korean Peninsula.

Moon expressed his anticipation that the second DPRK-US summit would be a crucial turning point in realizing the peninsula's complete denuclearization, the peace regime building on the peninsula and the development of the DPRK-US relations, which Trump and the DPRK leader agreed to during their Singapore summit.

For the corresponding measures to encourage the DPRK to take denuclearization steps, Moon asked Trump to make use of South Korea's role as it can reduce the US burden.

The South Korean leader said his country was ready to assume any role, if President Trump demands, ranging from the connection of railways and roads across the inter-Korean border to inter-Korean economic cooperation projects.

In his New Year's speech, the DPRK leader said he would work to build new relations with the United States, settle a lasting peace on the peninsula and pursue the complete denuclearization on condition that the United States takes corresponding measures.

Kim said he was willing to reopen the inter-Korean industrial park in the DPRK's border town of Kaesong and resume the suspended tour program to the DPRK's scenic resort of Mount Kumgang without any preconditions.

The Kaesong Industrial Complex and the Mount Kumgang tourist spot have been closed since 2016 and 2008 respectively.

South Korea and the DPRK held a groundbreaking ceremony in December to modernize and eventually link railways and roads along the western and eastern peninsula, but construction works had yet to be launched because of the international sanctions against Pyongyang.

The two Koreas have been left divided since the 1950-53 Korean war ended with an armistice. The peninsula remains in a technical state of war with no peace treaty signed.

During the phone talks, Trump explained to Moon preparations for the second DPRK-US summit and consultations between Washington and Pyongyang, expressing his anticipation for the Hanoi summit with the DPRK leader.

Trump showed his expectation for a big outcome from the Hanoi summit, saying he was expected to meet with Moon to share the outcome of the second DPRK-US summit, according to the Blue House.

The US president promised to closely consult with Moon on the second DPRK-US summit and follow-up measures, adding that the US-South Korea alliance was better than ever.