WORLD Moon visits US amid uncertainty over Trump-Kim summit

Moon visits US amid uncertainty over Trump-Kim summit 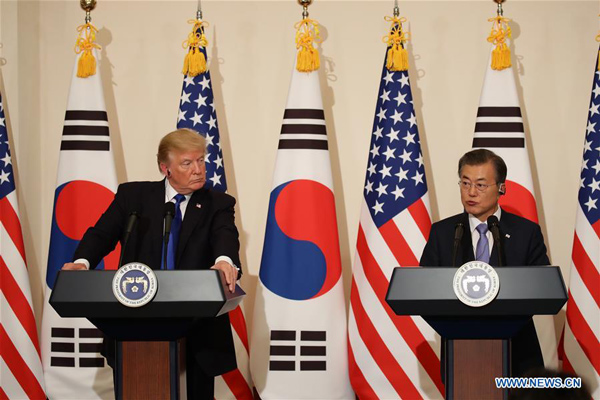 South Korean President Moon Jae-in is scheduled to meet US President Donald Trump amid uncertainty over the Trump-Kim summit.

Moon headed to Washington on Monday on "an apparent mission" to help broker a nuclear deal between the US and North Korea. Moon and Trump planned to hold talks late Tuesday, South Korea's Yonhap News Agency reported.

Moon's trip came after Pyongyang abruptly suspended inter-Korean talks last week, citing ongoing joint military drills between South Korea and the US. North Korean Vice Foreign Minister Kim Kye-gwan said that Pyongyang would reconsider the summit with the US if it comes under continued pressure for Pyongyang to "unilaterally" abandon its nuclear program.

"The Kim-Trump meeting is important for every government and their diplomatic policies. North Korea may not easily alter its economic development plan, and has displayed enough sincerity on denuclearization, including shutting down the nuclear site," Zhang Huizhi, a professor at the Northeast Asian Studies College of Jilin University, told the Global Times on Tuesday.

China has urged the US and North Korea to meet each other halfway, show good will and sincerity, and together create good conditions and the right atmosphere for their leaders' summit.

"Trump also wants to promote the summit. He needs this political achievement to fulfill his campaign promise and win support for mid-term elections, and to counter his diplomatic setbacks with traditional allies of the US," Cui Zhiying, director of the Korean Peninsula Research Center at Tongji University, told the Global Times.

How to persuade US politicians who insist on imposing tough policies toward North Korea might be Trump's toughest task, Cui said.

South Korean journalists on Tuesday were excluded from a media group, which is made up of journalists from China, the UK, Russia and the US.

The journalists flew from Beijing to Wonsan in North Korea on Tuesday and are scheduled to travel by train to the Punggye-ri nuclear site, South Korea's Yonhap News Agency reported on Tuesday.

"We will wait and see... We will do our best until the last minute," he was quoted by Yonhap as saying.

North Korea announced on May 12 that it will publicly dismantle the test site located in the country's northern region.

"North Korea's refusal to allow the South Korean journalists to attend is an attempt to pressure South Korean president to persuade the US to give up its demand for immediate denuclearization and accept a step-by-step approach," Zhang said.

Zhang said North Korea has ramped up its criticism of South Korea-US military exercises and showed anger over tough remarks by some US officials on the requirements for denuclearization.

Trump's national security adviser John Bolton said that North must denuclearize and ship its nuclear weapons to the US before it can receive any reciprocal benefits from Washington.

North Korea threatened to abandon the Kim-Trump meeting if Washington insists on pushing the North "into a corner" on nuclear disarmament, CNN reported.

"North Korea has made many compromises while the US has showed no sincerity. And the current South Korea-US joint military drills made the North feel threatened," Cui said.