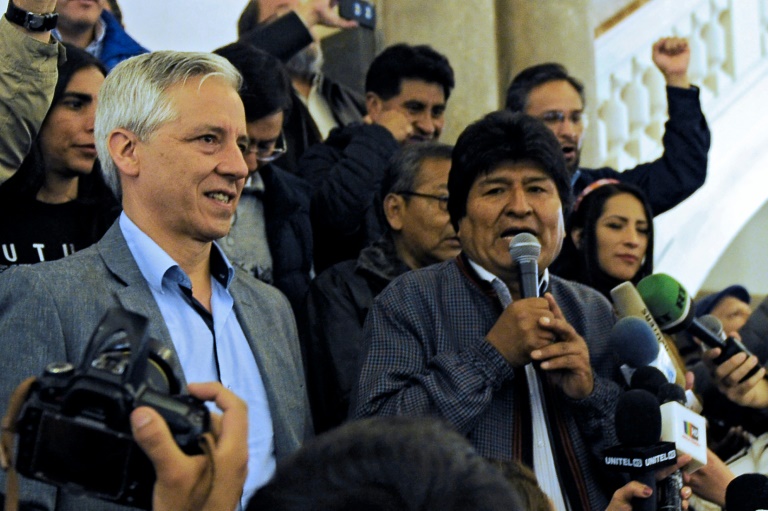 Evo Morales welcomed his first-round win in the Bolivian presidential election, telling cheering crowds 'we have won again, really, it is something historical, unforgettable.' (Photo: AFP)

Morales had 45 percent of the vote to Mesa's 38 percent, the Supreme Electoral Tribunal announced, with most of the votes counted.

Elected Bolivia's first indigenous president in 2005, Morales has won his previous elections in the first round, never having to contest a run-off.

The former coca farmer and leftist union leader has led the poor but resource-rich Latin American country for the past 13 years, though his popularity has waned amid allegations of corruption and authoritarianism.

He will face a stiff challenge from Mesa, a 66-year-old former president who led Bolivia from 2001-2005.

Mesa celebrated "an unquestionable triumph" in getting to the second round, amid cheers from his supporters at his La Paz headquarters.

Morales welcomed his first-round win, telling cheering crowds "we have won again, really, it is something historical, unforgettable".

South Korean-born evangelical pastor, Chi Hyun Chung, was the surprise package of the election, polling strongly to finish in third place with 8.7 percent.

His support is likely to be influential during campaigning for the second round on December 15.

Morales obtained Constitutional Court permission in 2017 to run again for president even though the constitution allows only two consecutive terms.

A new mandate would keep him in power until 2025.

"Any party, no matter how good it is, if it stays in place for too long, it is corrupt, that's what we're going through," said 22-year-old student Tania Villaroel Lopez as she joined a line of voters near the presidential palace in La Paz.

Roberto Fernandez, 32, came with his wife Denise and their two-year-old daughter to vote at the same place. They said they feared the result of the elections would be manipulated.

"We hope the end result will be respected," Fernandez said.

Milton Quispe, a student, said he would vote for "Evo, because he has taken care of the poor. He has known how to give us dignity."

After voting in his coca-growing district of Chapare, Morales, a member of the Aymara indigenous community, said he was optimistic about his chances and confident in Bolivia's democracy.

Mesa said he feared a rigged election after he voted in La Paz.

"I don't trust in the transparency of the process, the Supreme Electoral Tribunal has demonstrated that it's an operative arm of the government. We have a very high level of distrust," he told reporters.

Mesa lambasted what he said was Morales' powerful grip on key organs of state in a meeting with observers from the Organization of American States last week.

As leader of his Movement for Socialism Party (MAS), Morales points to a decade of economic stability and considerable industrialization as his achievements, while insisting he has brought "dignity" to Bolivia's indigenous population, the largest in Latin America.

But he stands accused of corruption, and many voters are enraged at his refusal to step aside even though the South American country's constitution bars him from running again.

"Power has replaced policies aimed at the whole population by others that only serve the interests of certain sectors," political commentator Maria Teresa Zegada told AFP.

"Opposition leaders have been persecuted, all of which has caused citizens unease and given the impression that democracy was in danger."

Bolivia's 2009 constitution, promulgated by Morales himself, limits a president to two consecutive terms of office.

In a 2016 referendum, voters defeated Morales' bid to secure public support to remove term limits, but his government rejected the result.

The constitutional court, stacked with Morales loyalists, ruled it was his right to seek re-election.

He has come under severe criticism this year as wildfires in August and September ravaged Bolivia's forests and grasslands, with activists saying his policies encouraged the use of blazes to clear farmland.