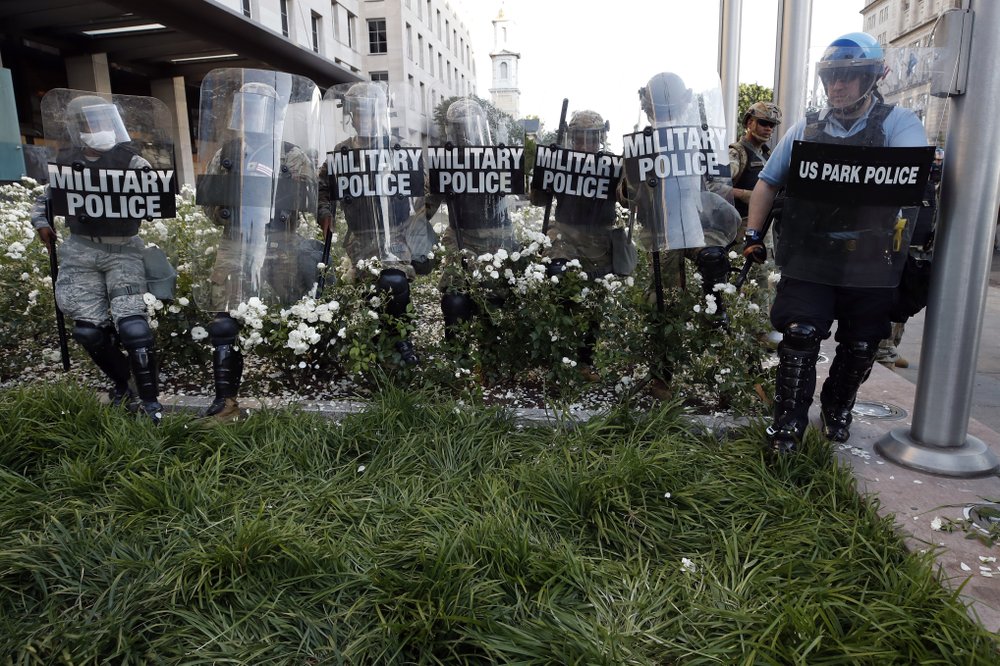 In this June 1, 2020, file photo police clear the area around Lafayette Park and the White House as demonstrators gather to protest the death of George Floyd in Washington. Floyd died after being restrained by Minneapolis police officers. (Photo: AP)

Nearly 500 of the active-duty troops brought in to help if needed with the civil unrest in the nation’s capitol have been given orders to leave Washington after a fourth day of largely peaceful protests, Army Secretary Ryan McCarthy and other officials said Friday.

But a number of other active-duty soldiers remain on alert in the region, prepared to respond if needed.

The decision to send the troops home comes as D.C. Mayor Muriel Bowser has repeatedly complained about the growing contingent of National Guard troops in the city to help handle the protests,and has opposed any use of active-duty forces.

According to McCarthy and other officials, about 350 soldiers from the 91st Military Police Battalion from Fort Drum, New York, about 30 members of the 16th Military Police Brigade from Fort Bragg, North Carolina, and about 100 military police from Fort Riley, Kansas, were given verbal commands to go home. They are expected to leave Friday.

The Army’s 3rd Infantry Regiment, which is normally most visible as the soldiers who stand at the Tomb of the Unknown Soldier, remains on alert just outside the city. The troops, known as the Old Guard, are based close to D.C. at Fort Myer, Virginia, and have been on 30-minute alert status.

“The Old Guard still remains in support. It is our intention to try and turn that off as soon as possible. We’ve had four peaceful days in a row, projecting a fifth,” said McCarthy, adding that there have been enough National Guard personnel brought in to provide any needed support for the protests in Washington.

More than 700 soldiers with the 82nd Airborne Division’s immediate response battalion boarded buses on Thursday evening and were back at Fort Bragg overnight. They had been kept at military bases outside Washington. Their departure had been delayed a day, causing a bit of confusion at a time of growing tensions with the White House over the military response to the protests.

On Wednesday, defense officials approved an order to send the 82nd Airborne soldiers home, but just a few hours later Defense Secretary Mark Esper reversed the decision, keeping them outside the city for another day.

McCarthy told The Associated Press that he was told about the reversal after Esper attended a meeting at the White House on Wednesday, and after other internal Pentagon discussions. McCarthy said he believed the change was based on ensuring there was enough military support in the region to respond to any protest problems.

The active-duty troops were available, but were not used in response to the protests and never went into D.C.

They were brought to the capital region early this week as protests in the city turned violent. The protests came in the aftermath of the death in Minnesota of a black man, George Floyd, after a white police officer pressed his knee to Floyd’s neck for several minutes.