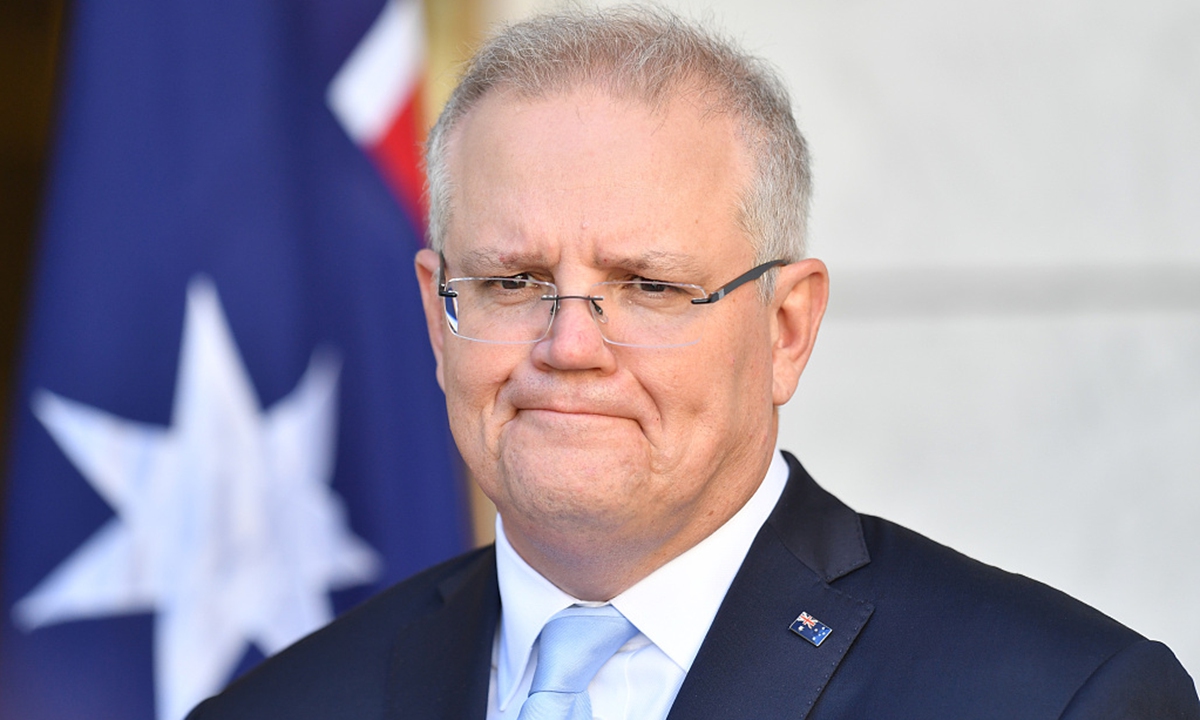 Australian Prime Minister Scott Morrison could not have imagined how many messages embedded with a new satirical cartoon to Morrison flooded his Twitter account on Wednesday. With his latest spat with China over a Twitter post regarding Australian soldiers' atrocities in Afghanistan continuing, more shocking details about Australia's war crimes in Afghanistan - the subject of the illustration - came into public view, triggering a tide of criticism and an online backlash on the hypocrisy and double standards of Canberra.

When some Chinese netizens claimed to be shocked by how Western politicians could play out their hypocrisy by denying their own wrongdoings and blaming others, more Australian people expressed their disappointment over the Australian leader, who instead of taking time to deeply reflect on the war crime scandals, is still entangled in his ill-intentioned playbook of attacking China. This time, it was about hiding Australia's own wrongdoings by diverting public attention toward Beijing. 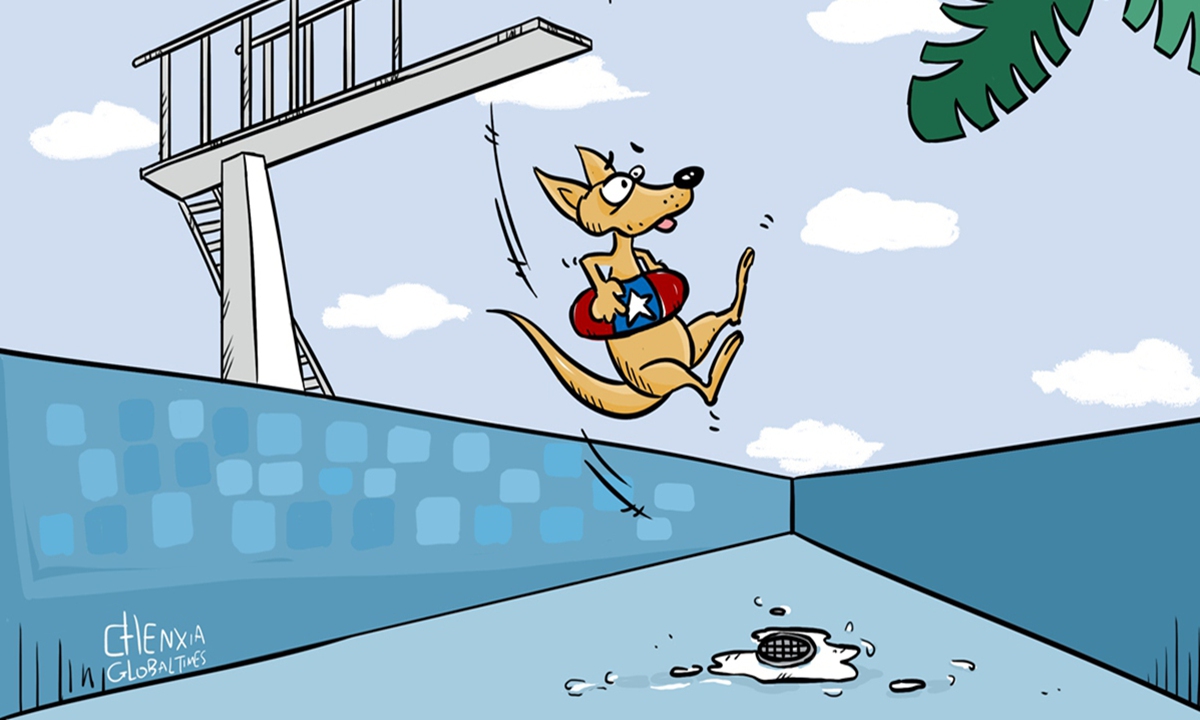 The online spat triggered by Morrison started with a satirical cartoon featuring an Australian soldier holding a knife to the throat of an Afghan child, which was then posted by Chinese Foreign Ministry spokesperson Zhao Lijian on his Twitter account.

The Australian PM called this illustration a fake image, demanding an apology from Chinese authorities on Monday. But the satirical cartoon was actually created by a Chinese cartoonist who goes by the name Wuheqilin, and he based his illustration on an inquiry report issued by the Australian Defense Department, which reveals Australian soldiers' war crimes in Afghanistan.

As the quarrel went on, public attention has turned into what the real reason is that made the Australian government so upset.

"What is Scott Morrison's outrage really about? The photo? I think not. What really offends him is that he doesn't think the Chinese have a right to comment on the murderous behavior of Australian special forces in Afghanistan," Martin Jacques, former senior fellow at the Department of Politics and International Studies at Cambridge University, tweeted on Monday.

Some footage circulating online showed how Australian Special Forces shot and killed an unarmed Afghan farmer in minutes. Some more horrifying video clips showed Australian soldiers drinking beer out of the prosthetic leg of a dead Taliban soldier. Among the wrongdoings of the Australian soldiers, the murders of "prisoners, farmers or civilians" constituted an unchecked "warrior culture" among some soldiers.

With the new development, the Chinese cartoonist created another satirical cartoon To Morrison Tuesday night featuring a boy dressed in red and wearing a red hat who is trying to draw the killing scene with a paintbrush, a group of reporters focusing their camera lens on him with their backs to the murders. In the distance, Morrison covers the bodies with the Australian national flag and points his finger at the boy and demands an apology. Behind Morrison is a smoke-filled battlefield where soldiers are seen shooting and killing unarmed civilians.

The image vividly refers to a metaphor of Morrison trying to divert public attention from Australia's scandalous crimes.

"What are the values that Australia wants to uphold? Are the crimes that have been disclosed and proven in Afghanistan consistent with Australian values? Australian soldiers killed innocent people, but the country does not allow others to comment. Is this in line with Australia's values?" Chinese Foreign Ministry spokesperson Hua Chunying asked during a routine press conference on Wednesday.

Fabricating facts out of thin air to attack and smear others while banning others from commenting on its wrongdoing - is this consistent with Australian values? Hua asked.

When some Western politicians continued pointing the finger at the so-called "disinformation" or "falsified photo," the Chinese cartoonist told the Global Times that he was surprised by the Australian prime minister's strong reaction to his fact-based cartoon.

Some observers see that the hypocrisy on display by the Morrison government has already backfired, as the more attention the public pays to this matter and what lies behind this illustration, the more the world will understand what war crimes the Australian soldiers committed, revealing "the truly ugly face" of Western political elites.

Amid growing concerns over credibility of the Australian government that would be weakened over the scandal, more voices among Australian officials and scholars are calling for easing the tension on the matter.

Some former officials in Australia raised their voices in shedding light on how little Australian public opinion focused on the Australian war crimes in Afghanistan, especially as the Brereton report contains much more detailed descriptions than an illustration created by a foreign artist.

John Menadue, former head of the Department of Prime Minister and Cabinet of Australia, said in a post published on Wednesday that he has not seen "any of our mainstream media do the obvious, publish the relevant extracts on alleged killing of Afghan children by Australian soldiers" when the Brereton report gives out details about throat-slitting scenarios.

More rational voices have also emerged on the global stage, including those from Afghanistan. "Killing civilians and children is war crime and I personally welcome the Chinese stance against the war crimes committed by Australian soldiers in Afghanistan," political analyst Zabihullah Zamaray told the Xinhua News Agency.

The Russian Foreign Ministry spokesperson Maria Zakharova was also quoted as saying in media reports on Monday that Australia's credibility on the world stage had been shattered by the revelations.

In trying to ease the tensions, former Australian prime minister Kevin Rudd was quoted in media reports on Wednesday as saying that "to deal with China, Australia should learn from Japan and 'put away the megaphone,'" referring to Tokyo's ability to deal with Beijing in an instructive way.

Voices also emerged among some former Australian officials and scholars calling for easing the tensions.

Those voices calling for easing the tensions are "speculative, utilitarian and extremely weak," as Australia is waiting for the new US government's China policy and Australia's China policy will depend on the new US administration, Yu Lei, chief research fellow at the Research Center for Pacific Island Countries at Liaocheng University, told the Global Times on Wednesday.

"However, their attempt to undermine China's strength will not succeed, especially when China concentrates its efforts to fight back, as it's also within the scope of expectations," Yu said.

With no signs of tensions being eased with China, Morrison appeared to stick to his demand for the apology. By pretending to stand firm against China, Morrison touted some so-called Western values to seek support from the international community while some of its allies echoed these calls.

Desecration of own values

By turning a blind eye toward the scandalous crimes committed by Australian soldiers in Afghanistan, the US, New Zealand and France came to support Australia, which however only shows that those US allies are losing the moral high ground.

US State Department deputy spokesperson Cale Brown tweeted on Wednesday that "we stand with our Australian partners in calling out the Chinese Foreign Ministry for spreading disinformation by fabricating an image of Australian soldiers in Afghanistan." Brown also called it "another example of its unchecked use of disinformation and coercive diplomacy."

A French government spokesperson also described the tweet posted by Chinese Ministry of Foreign Affairs spokesperson Zhao Lijian as "unworthy of diplomatic methods," which drew criticism from the Chinese embassy in France, as France has not condemned the war crimes, but instead accused those who denounced the atrocities.

New Zealand Prime Minister Jacinda Adern expressed support for Morrison, claiming that New Zealand has registered directly their concern over the matter with the Chinese authorities, according to media reports.

Backing Australia in the case reflects that the countries are bowing to the US-led anti-China pressure and the Western countries' common "political correctness," Chen Hong, director of the Australian Studies Center at East China Normal University in Shanghai, told the Global Times on Wednesday.

Such acts indicate clearly the collaboration and concerted efforts between Australian and US anti-China forces, which amount to nothing meaningful for today's international relations, he said.

It is no surprise to see countries like the US, New Zealand, France and the UK supporting Australia, as containing China's growth is their shared goal, but Canberra is the most loyal to Washington. Canberra has been willing to bear the highest economic costs of standing against Beijing, Yu said.

The reckless moves of the Australian government have led local farmers, exporters and business into struggles amid souring ties with China. Faced with growing criticism in Australia, some netizens pointed out that Morrison is losing his ethical compass domestically, with his double standards teaching a lesson to more Australians.