WORLD More bodies could be trapped inside capsized ferry in Tanzania: PM

More bodies could be trapped inside capsized ferry in Tanzania: PM 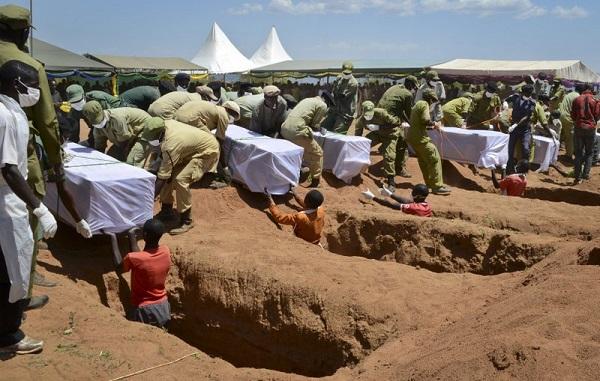 Funeral of the victims of Tanzanian ferry accident (Photo: AP)

"Work to pull the ill-fated ferry out of the lake started yesterday (Sunday) and one more body of a child has been recovered this morning (Monday morning)," said Majaliwa in his public address to the nation broadcast live on Tanzania Broadcasting Corporation.

"We suspect there might be more bodies trapped inside the ferry," Majaliwa said, adding that the operation to recover the bodies will continue until the ferry is pulled out of the waters of one of Africa's largest great lakes.

The announcement by the prime minister on the recovery of the body of the child brought to 226 the total number of death from the ferry tragedy.

Majaliwa said President John Magufuli has directed relevant authorities to immediately announce tenders for the assembly of a new 50-tonne ferry with the capacity to ferry more than 200 people.

He said the government has formed a seven-member investigative team of experts led by former army general George Waitara to establish what caused the sinking of the ferry.

"I have directed the team to come up with a full report in one month's time," said Majaliwa.

Following the ferry accident, President Magufuli on Sunday dissolved the board of directors of the Tanzania Electrical, Mechanical and Electronics Services Agency (TEMESA), which is mandated to provide efficient and effective electrical, mechanical and electronic services, and reliable and safe ferry transport services.

A terse statement by the Directorate of Presidential Communication at State House in the commercial capital Dar es Salaam said President Magufuli dissolved the TEMESA board of directors chaired by retired army Brig. Gen. Mabula Mashauri to pave way for investigations.

At the same time, Magufuli on Monday revoked the appointment of the chairman of the Board of Directors of the country's transport regulator, Surface and Marine Transport Regulatory Authority (SUMATRA), John Ndunguru.

The president also dissolved the SUMATRA board of directors following the ferry accident and several other accidents across the country that have claimed the lives of hundreds of people and caused loss of property.

Meanwhile, the Tanzania People's Defense Forces (TPDF) on Sunday began the arduous task of pulling out the ferry from Lake Victoria.

"Pulling the ferry out of the lake is a grueling task. Pray for us... this task could take us seven days," said Chief of Defense Forces Gen. Venance Mabeyo.

On Sunday, prime minister Majaliwa said police have arrested a number of officials responsible for operations of the ill-fated ferry.

"Police have arrested a number of officials for questioning following the grisly marine accident as investigations continue," said Majaliwa at the national burial of nine victims who were not identified by relatives.

About 216 victims have already been identified by relatives and their bodies collected for burial.

On Friday, President Magufuli announced a four-day mourning for the victims of the ferry accident. The mourning period ends on Monday.

According to sources, the ferry, with a capacity of 101 passengers and 25 tonnes of cargo, capsized at around 1 p.m. local time Thursday.

The last major ferry accident on Lake Victoria occurred in 1996 in the same region, killing at least 500 people.