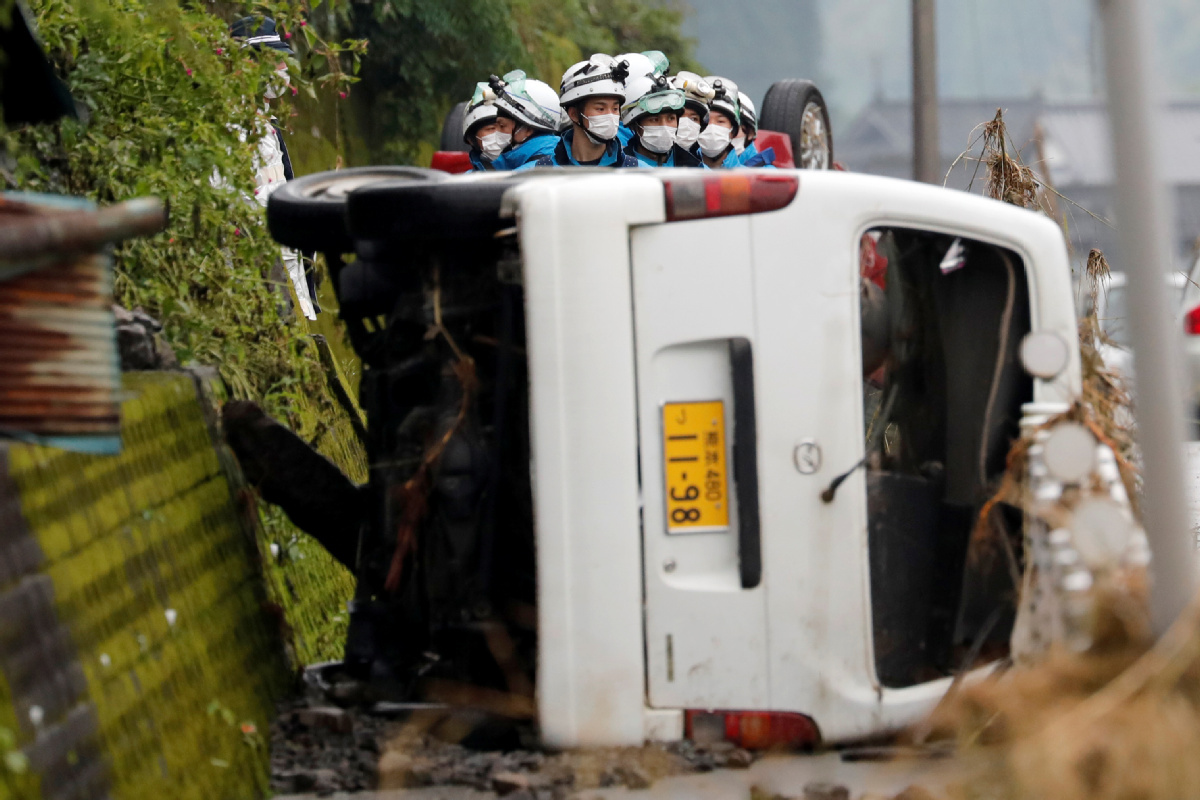 Police officers stand behind an overturned vehicle after floods swept through the village of Kuma in Japan's Kumamoto Prefecture on Thursday. (Photo: Reuters)

Pounding rains that had already caused deadly floods and landslides in southwestern Japan will continue to move northeast, the Japan Meteorological Agency said on Thursday, warning of further devastation.

"There is a possibility of heavy downpours in western and eastern Japan lasting until at least Sunday," the agency said, calling for "extreme vigilance" on landslide risks and flooding in low-lying areas.

According to Japan's Fire and Disaster Management Agency, at least 60 people had died over several days of flooding while rising floodwaters and roads damaged by landslides had blocked access to more than 3,000 households, mostly in the hardest-hit southwestern region of Kumamoto Prefecture.

Japanese Chief Cabinet Secretary Yoshihide Suga said authorities were investigating whether four other deaths were linked to the floods, adding that 17 people were missing and a dozen injured.

Footage on public broadcaster NHK showed rising waters in the Hida River, in the Gifu Prefecture, gouging into an embankment, destroying a national highway along the river. In Kyoto Prefecture, a powerful mudslide swept away three cars near the intersection of an expressway.

Across Japan, around 870,000 people had been urged to evacuate as the weather agency issued its second-highest evacuation order to another 450,000 people. However, such orders are not compulsory.

More than 80,000 rescue workers had been mobilized to save lives, backed by another 10,000 troops. But the outbreak of COVID-19 was complicating the rescue efforts, as the need to maintain social distancing had reduced capacity of shelters and many refused to take refuge in them for fear of becoming infected.

"A special characteristic of this disaster I felt was not people hesitating to evacuate, but people hesitating to offer help," one emergency worker told NHK. "In past disasters, by the fourth day, we would normally see relief efforts like people preparing meals. This time, I am yet to see anything like that."

Meanwhile regional authorities had asked potential volunteers from outside Kumamoto not to travel to the region, for fear of spreading the virus.

In the middle of Japan's rainy season, at least 3,995 buildings in Fukuoka Prefecture, 309 in Kagoshima Prefecture, 132 in Kumamoto Prefecture and 112 in Oita Prefecture were flooded, and officials warned that the number of damaged homes could rise further.

"We have experienced flooding disasters many times in the past. But this one doesn't compare. Rather than being afraid, I was just focused on escaping," Kinuyo Nakamura said after she made it to an evacuation center.