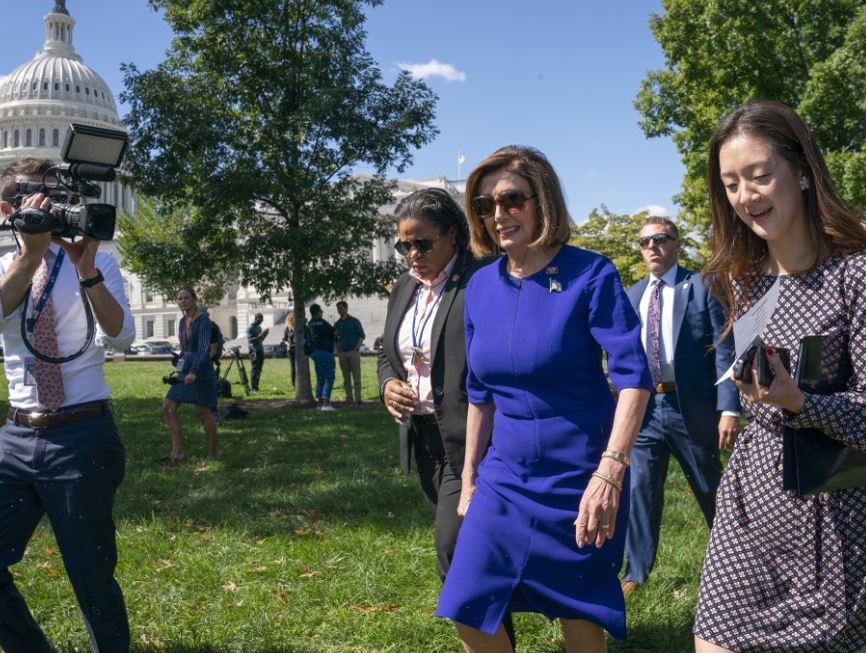 Speaker of the House Nancy Pelosi, D-Calif., joins a rally of organized labor to show support for union workers, at the Capitol in Washington, Tuesday, Sept. 24, 2019. (Photo: AP)

Democrats lined up in ever greater numbers Tuesday urging an impeachment probe of President Donald Trump, pushed to action by his phone call with Ukraine’s new leader and what Trump may or may not have said about corruption, frozen US millions and Democratic rival Joe Biden.

Trump, meanwhile, insisted anew that he did nothing wrong in freezing funding for the Eastern European ally before talking with the Ukraine president about former Vice President Joe Biden and his son Hunter Biden. That phone call is part of a complaint by a government whistleblower against Trump.

The president Trump acknowledged Tuesday that he personally ordered his staff to freeze nearly $400 million in aid to Ukraine a few days before the phone call to Volodymyr Zelenskiy. In remarks to reporters at the United Nations, Trump said he held up the aid to fight corruption and urge European nations to share in helping out Ukraine.

“I’d withhold again,” Trump said. “And I’ll continue to withhold until such time as Europe and other nations contribute to Ukraine.” He named Germany and France as among the countries that should “put up money.”

The money, which had been approved by Congress, was released after the July phone call.

Pelosi, in Washington, said she would make an announcement about next steps “after I meet with my chairmen, my leadership and my caucus.”

A vote on some sort of statement of disapproval could come as soon as this week to show the House Democrats’ unease after the allegations against Trump. Another option would be to create a select committee to deepen the probes of the Trump administration. House Judiciary Committee Chairman Jerrold Nadler has declared that his committee is already conducting impeachment hearings, but the panel has been unable to get many key witnesses and documents from the Trump administration.

Pelosi is trying to hold off impeachment as a politically divisive issue unless the public demands it, but the new urgency could tip her toward launching a more specific investigation. Nearly 20 lawmakers have stepped forward in recent days, joining well over half the House Democrats now pushing toward impeachment.

“Now is the time to act,” said Rep. John Lewis of Georgia, the civil rights icon, in an emotional address to the House by the 70-year-old lawmaker who is often viewed as the conscience of the chamber’s Democrats.

“The time to begin impeachment proceedings against this president has come,” Lewis said. He said he has been patient but now, “To delay or to do otherwise would betray the foundation of our democracy.”

The Trump-Ukraine matter is part of the whistleblower complaint, raising questions of whether the president improperly used his office to pressure a foreign country to help his own reelection prospects. Democrats are demanding more information and those raising the prospect of impeaching the president now include many moderate House freshmen in competitive districts.

One idea that was being discussed was the possibility of a select committee that could handle these new issues.

Virginia Rep. Abigail Spanberger, a former CIA agent and one of the freshman Democrats from military and national security backgrounds who came out together for impeachment proceedings, said “the notion of a select committee is likely a good one” -- as long as it remains bipartisan.

“We should all want to get to the bottom of these allegations and know without a shadow of a doubt that our president is either innocent or he’s not,” Spanberger said in an interview with The Associated Press.

The line of new lawmakers backing impeachment proceedings came as Spanberger and six other House freshmen from national security backgrounds — including a former Navy pilot, soldiers, officers and intelligence analysts — wrote in a joint op-ed that the allegations against Trump “are stunning, both in the national security threat they pose and the potential corruption they represent.”

If true, they represent an impeachable offense, the lawmakers said.

At issue is a summer phone call with Ukraine President Zelenskiy , in which Trump is said to have pushed for investigations into Biden and his son.

Trump has sought, without evidence, to implicate Biden and his son Hunter in the kind of corruption that has long plagued Ukraine. Hunter Biden served on the board of a Ukrainian gas company at the same time his father was leading the Obama administration’s diplomatic dealings with Kyiv. Though the timing raised concerns among anti-corruption advocates, there has been no evidence of wrongdoing by either the former vice president or his son.

The United States began providing military aid to the government of Ukraine shortly after Russia illegally annexed Ukraine’s Crimean peninsula in 2014. With Ukraine’s new president still grappling with separatist rebels in the east, the aid has long been viewed as a measure of Washington’s determination to push back against Russian President Vladimir Putin.

Democrats, and some Republicans, have urged the White House to be open about Trump’s actions, including releasing a transcript of the phone call.

Senate Democratic Leader Chuck Schumer said he would seek a vote in the Republican-controlled Senate on a resolution calling for the Trump administration to provide Congress with the whistleblower’s government complaint.

Lawmakers are demanding details of the complaint, but the acting director of national intelligence, Joseph Maguire, has refused to share that information, citing presidential privilege. He is set to testify Thursday before the House.

Trump said Monday he may, or may not, release details or a transcript of the call but has stressed that foreign leaders should feel free to speak frankly with an American president without fear that the details of their conversations will later be disclosed.