While the World Health Organization (WHO) is planning its next phase of COVID-19 origins study, China has made it clear that the next-phase study should be carried out in multiple places worldwide, including places outside China where samples of human and animal before the Wuhan outbreak were tested positive for COVID-19.

Liang Wannian, team leader of the Chinese side of the WHO-convened joint expert team on the origins tracing said in a recent press briefing attended by more than 160 representatives and ambassadors from international organizations and embassies that the next-phase study should be conducted in multiple places worldwide covering countries where horseshoe bat and pangolins reside, nations that lack sufficient testing, places with animal and human samples that have tested positive for COVID-19, and who supplied the Wuhan Huanan market through cold-chain logistics. 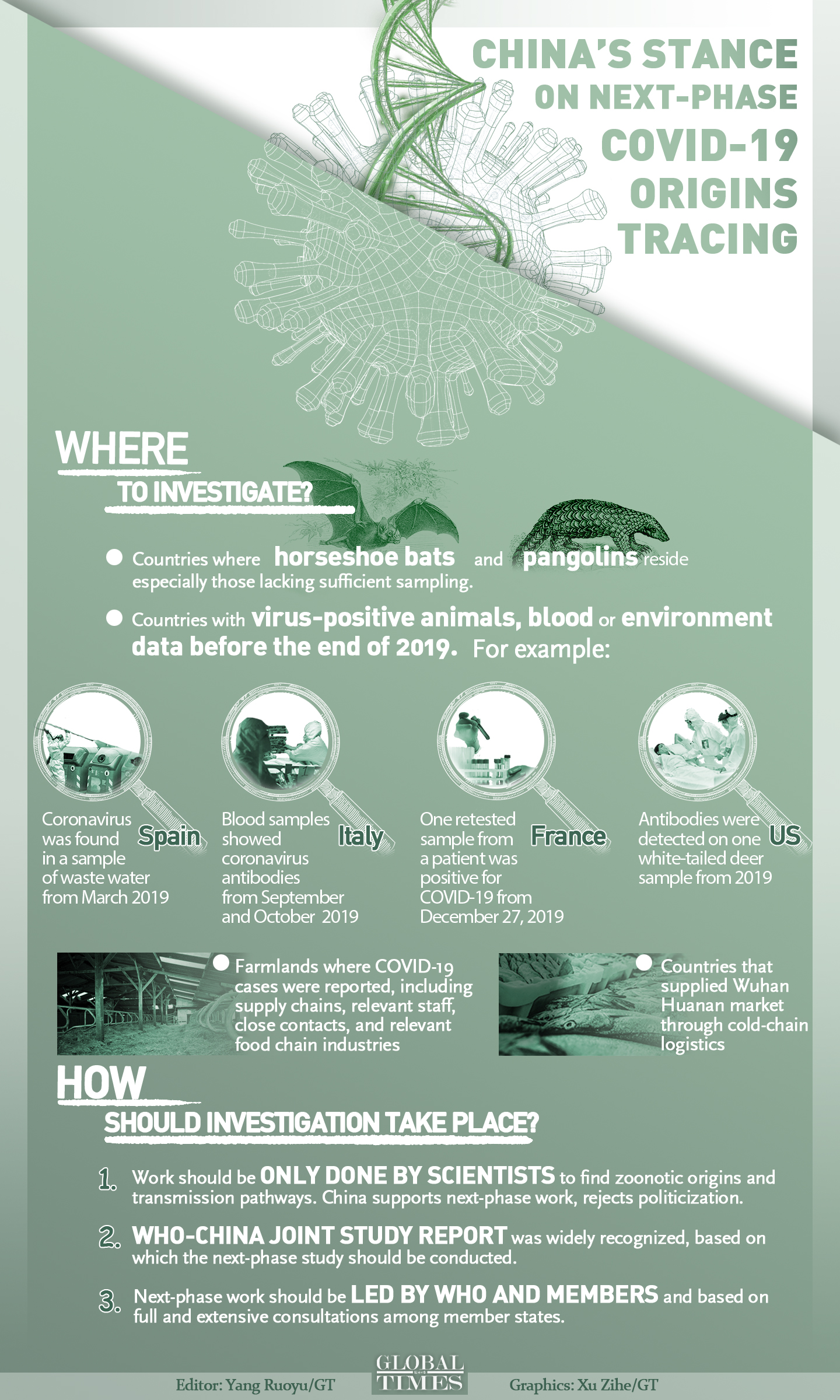 China's stance on next-phase virus origins tracing: Investigations should be carried out in countries such as where horseshoe bats & pangolins reside, those with virus-positive animal data and who supplied Wuhan Huanan market through cold-chain logistics. (Photo: Global Times)

The proposal came as evidence in countries such as the US and Italy has mounted to suggest that the COVID-19 cases already existed in multiple countries before the outbreak in the Chinese city of Wuhan.

And the WHO has started working with some countries including Italy on testing of early samples. In a statement published on August 12, WHO said it is "working with a number of countries that have reported detection of SARS-CoV-2 in samples from stored biological specimens from 2019."

For example, in Italy, WHO facilitated an independent evaluation by international laboratories from the findings of one such study, which included the blind retesting of pre-pandemic blood samples, WHO said.

A WHO spokesperson told the Global Times that the agency is in contact with the researchers who published the study suggesting early circulation of COVID-19 among asymptomatic individuals in Italy several months before the first patient was identified, and collaboration with partner laboratories has been set up for further testing of available samples from Italy during that period.

The study, mentioned by WHO, was released in November 2020 by the National Cancer Institute (INT) in Milan which showed that COVID-19 antibodies were detected in the blood samples of 111 of 959 individuals enrolled in a lung cancer screening trial between September 2019 and March 2020.

Not just in human beings, but early infection involving animals such the US white-tailed deer were also reported frequently.

A Chinese member of the WHO-China joint study team on virus origins tracing told the Global Times on the condition of anonymity that two possible paths can be taken to help locate the source of the virus: one is to find early human cases and test animals that those early cases had contacted; and the other is to test a wide array of animals susceptible to the coronavirus, including cats, deer, and mink.

Peter Forster, a geneticist from Cambridge University, told the Global Times that he is not surprised that there might be cases earlier than those in China.

"My dating suggests sometime between September and December 2019," said the geneticist.

Italy was the first Western country to be severely hit by the epidemic, with the first known case reported in the Lombardy region on February 21, 2020. But a recent paper under the project of Preprints with The Lancet by a group of researchers from universities in countries including Italy and US indicated that they found evidence that the virus was circulating in Lombardy from late June to early August 2019. The paper has not been peer-reviewed.

The paper investigated 156 out of 435 samples, isolated RNA from throat swabs and urine samples, then put them on Sanger sequencing, a method for determining the nucleotide sequence of DNA, and detected mutations to estimate the time of emergence of the virus.

The paper, however, didn't tell of the origins of the virus, Sayaka Miura, an associated professor at Temple University's department of biology, who also co-authored the paper, told the Global Times. Yet she pointed out that "the finding of the virus in Italy in summer 2019 means that the virus was already spreading at least in Italy much earlier than the outbreak in China."

She admitted that more data from 2019 are needed, and more retrospective studies from many different countries will help to better understand the early history of the virus spread.

Researchers of the paper compared the obtained sequences to the strain found in Wuhan, and found that sequences from October 2019 already carried variants that were absent in the first sampled strains reported from Wuhan.

The comparison of samples in Italy and China showed that the infected cases in Italy were not patient zero and that the two variants had the same progenitor but due to complicated symptoms of COVID-19, it's difficult to locate patient zero, the anonymous Chinese scientist said.

The scientist said that's why more countries should jointly work on finding the early samples and in tracing the patient zero.

A study of more than 24,000 samples taken for a National Institutes of Health (NIH) research program in the US between January 2 and March 18, 2020 suggest that seven people in five states - Illinois, Massachusetts, Mississippi, Pennsylvania and Wisconsin - may have been infected well before the country's first confirmed cases were reported in January 21, 2020.

Since early 2020, people in various countries including the US and UK have been saying on social media they had symptoms similar to COVID-19 back in December or even November 2019, before the Wuhan outbreak.

American public figures have also shared their experience. Michael Melham, the mayor of Belleville New Jersey, said he believed he was sick with the virus in November 2019 and suffered from chills, hallucinations, and a "skyrocketing temperature" after he left a conference in Atlantic City, local media northjersey.com reported in April 2020.

Clearly US media noticed that many Americans tweeted that they had symptoms similar to those of COVID-19 as early as December 2019 or January 2020, but what those media outlets did was ask these people to stop, prompting speculations that they were hiding something by not encouraging people to talk about it.

A New Jersey local news outlet, nj.com, in May published an op-ed titled "Stop saying you think you had coronavirus."

Even the mayor was suspecting, asking in a tweet whether any reputable media outlets consider a story on American people who believed they had COVID-19 before January 2020.

"What about just on the ones with positive antibody tests? What's the secret? Who's hiding what and why?" he asked.

It's certainly worth looking into these people who listed their symptoms similar to COVID-19, the scientist said, noting that the US should conduct serum tests on all possible patients as China has done serum detection on samples before December 2019 but did not find any that tested positive for the nucleic acid or containing antibodies.

David L Robertson, a professor at MRC-University of Glasgow Centre for Virus Research, told the Global Times that the available data supports COVID-19 being caused by a natural virus that probably emerged from horseshoe bats and, much like SARS, this was probably through contact with infected intermediate host animals in markets in Wuhan.

Sampling over wider geographical areas for horseshoe bats is very important if we're going to find the origin of SARS-CoV-2 and prevent the risk of a future spillover, he said while commenting on a new paper he co-authored, which said horseshoe bats are dispersed widely from East to West China, and in Southeast Asia and Japan.

The anonymous scientist also urged countries where a reported large number of certain animal infections in early 2020 or late 2019 to carry out more nucleic acid tests on animals and analyze sequences to find the possible animal that first passed the virus on to humans.

So far, many types of animals such as mink, cats, tigers, and deer were reported to have had virus infections. A recent study showed the white-tailed deer in four US states in 2021 was found to have SARS-CoV-2 antibodies, indicating that they had been exposed to the virus.

As the Joe Biden-set deadline for the 90-day investigation into the virus' origins draws to a close, the US is stepping up its efforts to manipulate American media outlets to discredit China, coerce China's neighbors to participate in its campaign to smear China as the "source of the coronavirus." It also allegedly used vaccine aid, talent training and industrial investment as bait, and is pressuring WHO and rallying the US' allies, including the EU, Australia and Japan to promote a "second-phase origins tracing" probe on China despite its own research institutions and allies believing that the virus was almost certainly not created via artificial means, sources told the Global Times previously.