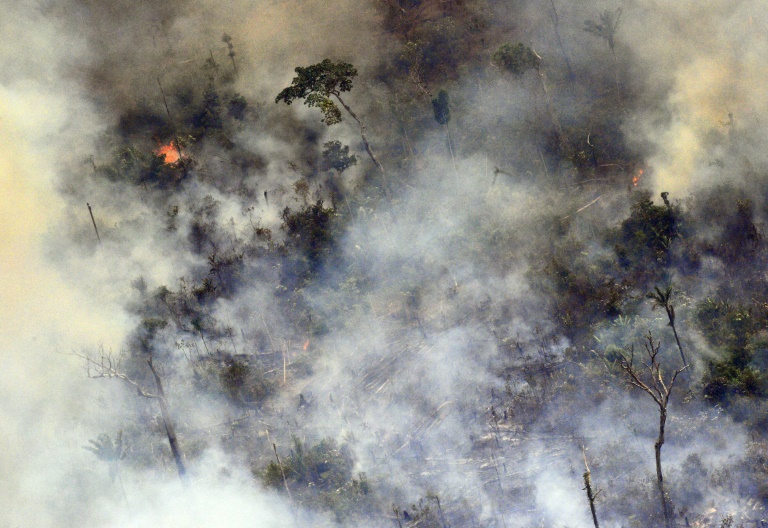 Aerial picture showing smoke from a two-kilometre-long stretch of fire billowing from the Amazon rainforest about 65 km from Porto Velho, in northern Brazil, on August 23, 2019. (Photo: AFP)

Hundreds of new fires have flared up in the Amazon in Brazil, data showed Monday, even as military aircraft dumped water over hard-hit areas and G7 nations pledged to help combat the blazes.

Smoke choked Port Velho city as fires raged in the northwestern state of Rondonia where fire-fighting efforts are concentrated, amid a growing global uproar and a diplomatic spat between France and Brazil.

Two C-130 Hercules aircraft carrying thousands of liters of water on Sunday began dousing fires devouring chunks of the world's largest rainforest, which is seen as crucial to keeping climate change in check.

Swaths of the remote region have been scorched by the worst fires in years, sending thick smoke billowing into the sky.

Experts say increased land clearing during the months-long dry season to make way for crops or grazing has aggravated the problem this year.

The worsening crisis has fueled a row between President Jair Bolsonaro and his French counterpart Emmanuel Macron, who has been piling pressure on Bolsonaro to do more to protect the forest.

Macron on Monday condemned "extraordinarily rude" comments made about his wife Brigitte by Bolsonaro a day earlier.

Bolsonaro hit back, accusing Macron of treating Brazil like "a colony or no-man's land."

The G7 club also agreed to support a medium-term reforestation plan which will be unveiled at the UN in September, Macron and Chile's President Sebastian Pinera said.

Although about 60 percent of the Amazon is in Brazil, the vast forest also spreads over parts of eight other countries or territories.

Bolivian President Evo Morales said Sunday he would accept international help to combat wildfires raging in his country's southeast as he suspended his election campaign to deal with the crisis.

Brazil has accepted help from Israel, which offered to send an aircraft.

Seven states, including Rondonia, have requested the Brazilian army's help in the Amazon, where more than 43,000 troops have been made available to combat fires.

It is not clear how many of them are actually involved in fire-fighting efforts so far.

After initially blaming the fires on non-government organizations, Bolsonaro on Friday vowed a "zero tolerance" approach to criminal activities in the Amazon and promised strong action to control the blazes.

Dozens of firefighters arrived in Porto Velho on Sunday and Justice Minister Sergio Moro has given the green light for the deployment of security forces to tackle illegal deforestation.

The latest official figures show 80,626 forest fires have been recorded in Brazil this year, the highest number of any year since at least 2013.

More than half of the fires are in the massive Amazon basin.

Some 1,113 new fires were ignited between Saturday and Sunday, according to Brazil's National Institute for Space Research.