WORLD More immigrants sue US over end to protected status

More immigrants sue US over end to protected status 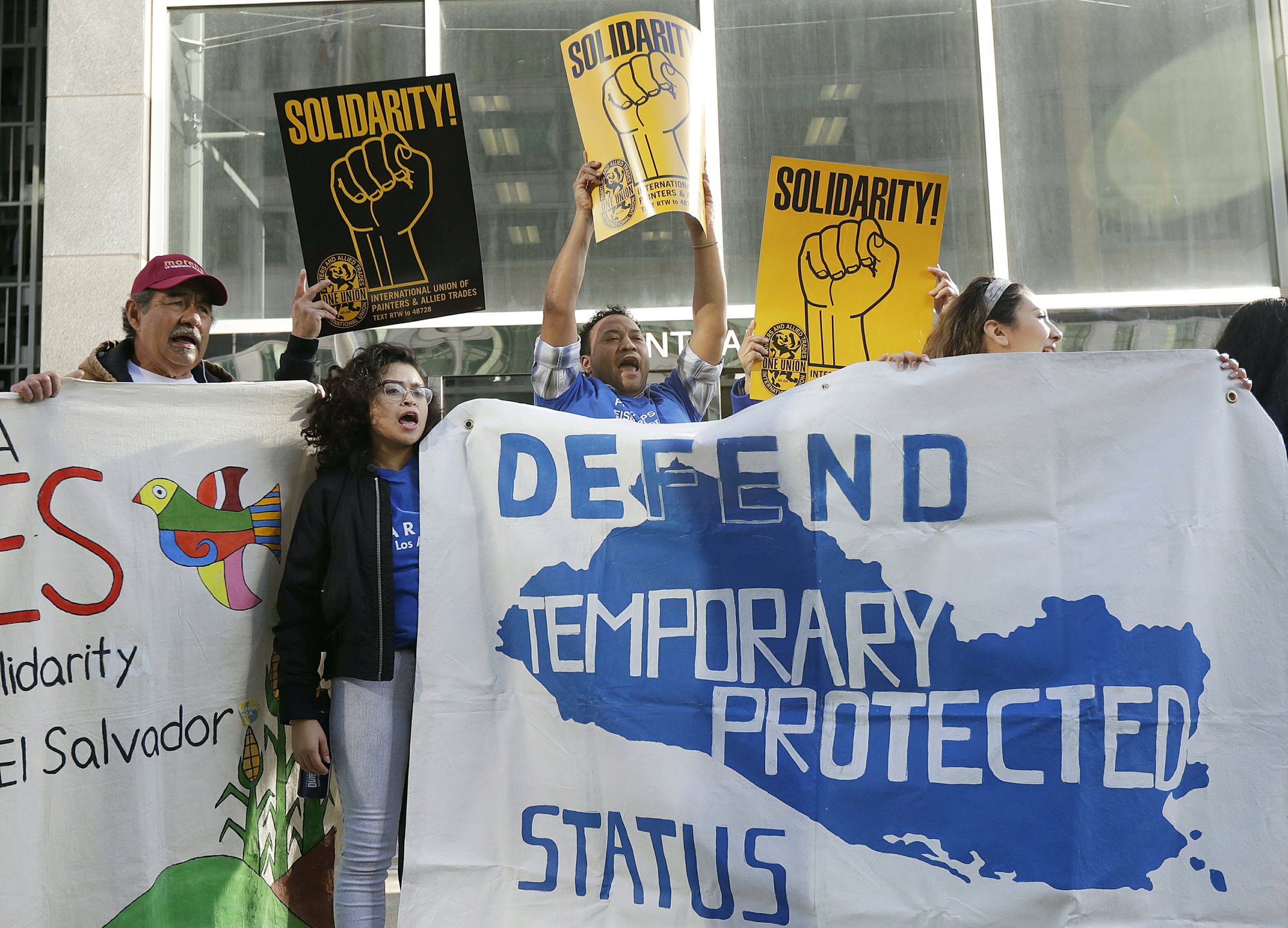 In this March 12, 2018 file photo, supporters of temporary protected status of immigrants cheer as they hold signs and banners with the outline of El Salvador at a rally at a federal courthouse in San Francisco. (Photo: AP)

Immigrants from Honduras and Nepal have filed a lawsuit alleging the Trump administration unfairly ended a program that lets them live and work in the United States.

The lawsuit filed late Sunday in federal court in San Francisco alleges that the US Department of Homeland Security’s decision to end so-called temporary protected status for the countries was motivated by racism.

The suit — which was filed on behalf of six immigrants and two of their American-born children — also alleges that the department changed how it evaluated conditions in these countries when determining whether immigrants could return there.

The group is one of several representing the immigrant plaintiffs, who live California, Minnesota, Maryland, Virginia and Connecticut.

A message seeking comment was left for the Department of Homeland Security.

The lawsuit is the latest in a series of court filings challenging the Trump administration’s decision to end the program for a cluster of countries whose citizens have lived and worked legally in the United States for years.

Last year, a federal judge in San Francisco temporarily blocked the US government from halting the program for immigrants from El Salvador, Haiti, Nicaragua and Sudan. The suit filed by citizens of those countries, much like this one, cited Trump’s vulgar language during a meeting last year to describe African countries.

The US government grants temporary protected status, also known as TPS, to citizens of countries ravaged by natural disasters or war so they can stay and work legally in the United States until the situation improves back home.

The status is short-term but renewable and some immigrants have lived in the country for decades, raising American-born children, buying homes and building careers.

Critics have said the program was meant to be temporary and shouldn’t be extended for so long.

The Trump administration announced last year that the program would be ending for Honduras and Nepal. Honduras was designated for the program after a devastating 1998 hurricane and about 86,000 immigrants from the country have the status, according to the lawsuit.

About 15,000 immigrants from Nepal — which was designated following an earthquake in 2015— are covered, the suit said.

Together, these immigrants have more than 50,000 American children who would be affected by an end to the program, which lets those who are already in the United States stay in the country and obtain work permits, the suit said.

One of them is the 9-year-old daughter of Honduran citizen Donaldo Posadas Caceres, who came to the United States shortly before the hurricane in 1998. After Honduras was designated for the program, he obtained the status, and now works as a bridge painter and owns his home in Baltimore.

He said he doesn’t want his children to return to a country they don’t know and where life is so dangerous. His elder daughter, he said, is in college studying to be a lawyer while the 9-year-old has plans of her own.

“She has the dreams of a child: she wants to be president,” he told reporters in Spanish during a telephone conference. “And I want to be here in the United States to support them, and see their achievements.”