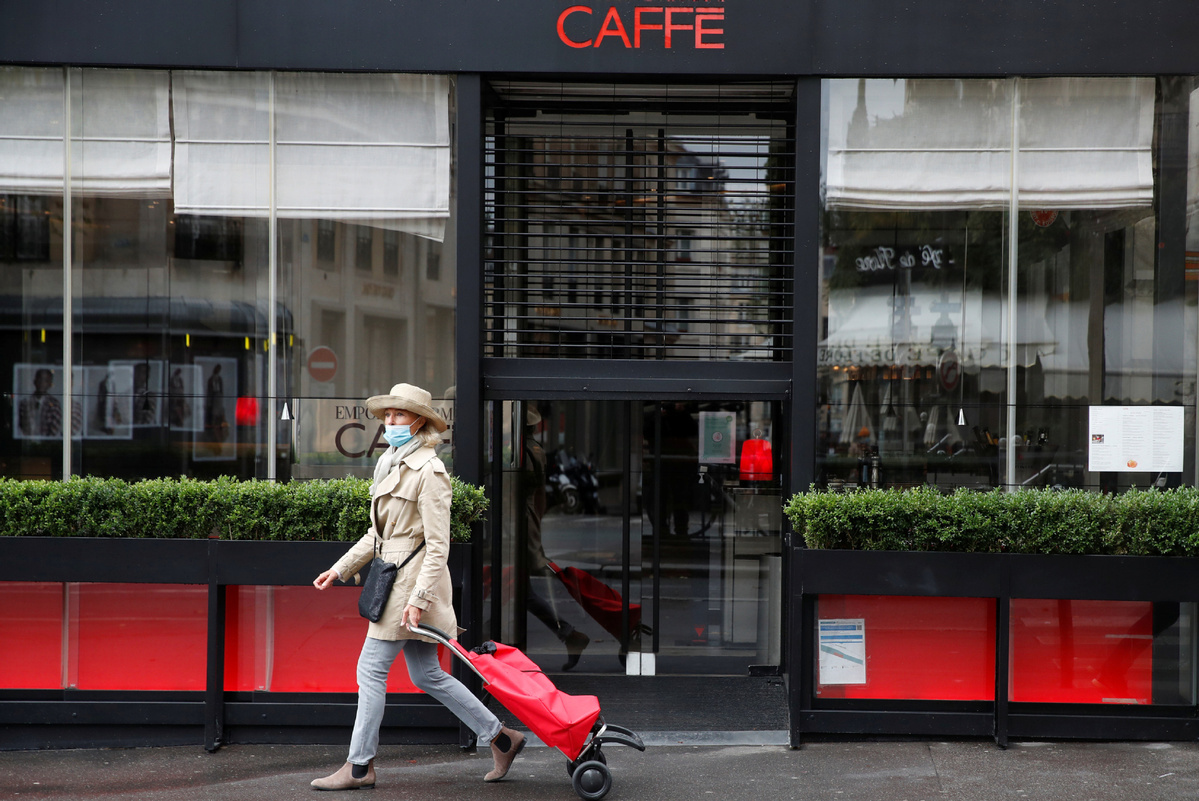 A woman wearing a protective face mask walks past a closed restaurant in Paris, before the announcement of new COVID restrictions by Paris authorities as the coronavirus disease (COVID-19) outbreak continues in France, Oct 5, 2020. (Photo: Agencies)

Europe is now reporting more than 150,000 daily novel coronavirus cases and cities across the continent are battling to contain the situation with new restrictions.

Paris and other French cities began a nighttime curfew on Saturday that is expected to last for at least a month and aims to curb the soaring infection rate.

France registered nearly 142,800 new infections last week, which is more than the 132,430 reported during the entire two-month lockdown from mid-March to mid-May, according to analysis by the Reuters news agency.

The increasing number of non-COVID-19 patients in French hospitals is making the situation worse, according to the Agence France Presse.

"It's terrible. It feels to me like being back in March," said Hocine Saal, head of emergency services at a hospital in the Paris suburb of Montreuil.

In Germany, Chancellor Angela Merkel has urged citizens to stay at home whenever possible after 7,830 cases emerged during 24 hours, DW reported.

"We have to do everything to prevent the virus from spreading out of control. Every day counts," Merkel said in a weekly video podcast on Saturday.

"Difficult months are ahead of us," she added. "How winter will be, how our Christmas will be — that will all be decided in these coming days and weeks, and it will be decided by our behavior."

Europe is now reporting more daily cases than India, Brazil and the United States combined, according to Reuters. The World Health Organization said the 44 percent rise in European cases in a week was "very concerning".

The United Kingdom has introduced a three-tiered system of tougher restrictions in some areas, and reported a seven-day average of 16,228 new cases per day.

The Liverpool city region and the county of Lancashire are under the highest level of restrictions. Meeting resistance from local leaders, Britain's Prime Minister Boris Johnson said the spread in the Greater Manchester area is "grave" and that no solution would be "pain free".

The UK's Office for National Statistics has shared data showing men from African, Caribbean and Bangladeshi ethnic backgrounds have higher rates of death involving the virus in England and Wales.

Previous analysis from the ONS had combined Pakistani and Bangladeshi groups, but new estimates show the latter group had a "significantly higher risk" of dying of COVID-19.

Germany's strategy of maintaining high levels of testing using private and public laboratories has helped it limit cases, according to its health minister, Jens Spahn. He said: "It is much more expensive to test too little, than to test too much."

The country has mobilized a vast network of labs to quadruple its testing capacity to 1.6 million per week, the Financial Times reported.

"The special situation in Germany is that we historically have a network of private labs, spread out nationwide, which are more or less connected and work together cooperatively," said Michael Muller, the chairman of ALM, an association that represents 109 laboratories. "We didn't have to invent anything new," he was quoted as saying.

Slovak Prime Minister Igor Matovic has said the country will test every person aged 10 and older for the virus. "If we manage to pull this off, we can set an example for the entire world," said Matovic, adding that the tests would be free.

It comes as manufacturers are reportedly struggling to meet increased demand for the influenza vaccine. Experts have warned of "colliding epidemics".

Germany has ordered 26 million flu vaccines ahead of the European winter, with Spahn saying the country had "never had so many".

The UK government said it aimed to vaccinate 30 million people this year, more than double the 2019 figure.

Rebecca Jane Cox, professor of medical virology at University of Bergen told the Financial Times that if there was an overlap of COVID-19 and influenza, it "could be a disaster".

She said: "The question will be how hard the northern hemisphere is going to be hit by the flu now."