WORLD More sanctions to be imposed on Venezuela: Pompeo

More sanctions to be imposed on Venezuela: Pompeo 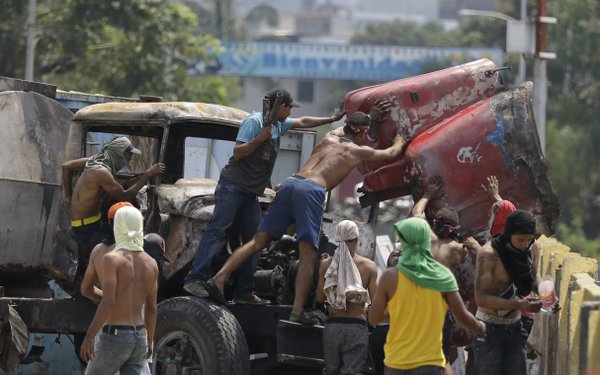 Venezuelans work to remove a roadblock created by Venezuelan National Guards on the Simon Bolivar International Bridge in La Parada, near Cucuta, Colombia, on the border with Venezuela, Sunday, Feb. 24, 2019. (Photo: AP)

WASHINGTON, Feb. 24 (Xinhua) -- US State Secretary Mike Pompeo said Sunday in an interview that the United States would impose more sanctions against Venezuela.

"There'll be a meeting of the Lima Group on Monday, where further action will be contemplated. There are more sanctions to be had," Pompeo said in the interview with CNN.

Vice President Mike Pence would travel to Colombia on Feb. 25 to attend a Lima Group meeting on behalf of President Donald Trump, the White House said on Thursday.

The Lima Group, comprising 13 Latin American countries and Canada, is a multilateral body established in August 2017 to focus on Venezuela's situation.

Pompeo also noted that the United States would provide more "humanitarian assistance" to Venezuela, saying the aid was requested by the opposition leader Juan Guaido.

"I think we'll find other ways to make sure that food gets to the people who need it," Pompeo said in the interview.

According to a statement issued by the United States Agency for International Development (USAID), the United States has airlifted approximately 191 metric tons of relief supplies to the Colombian border city of Cucuta since Feb. 4.

In response, Maduro announced he was severing diplomatic and political ties with the United States, ordering all US diplomatic and consular personnel to leave Venezuela.