WORLD More switching off from COVID-19 news in US

More switching off from COVID-19 news in US 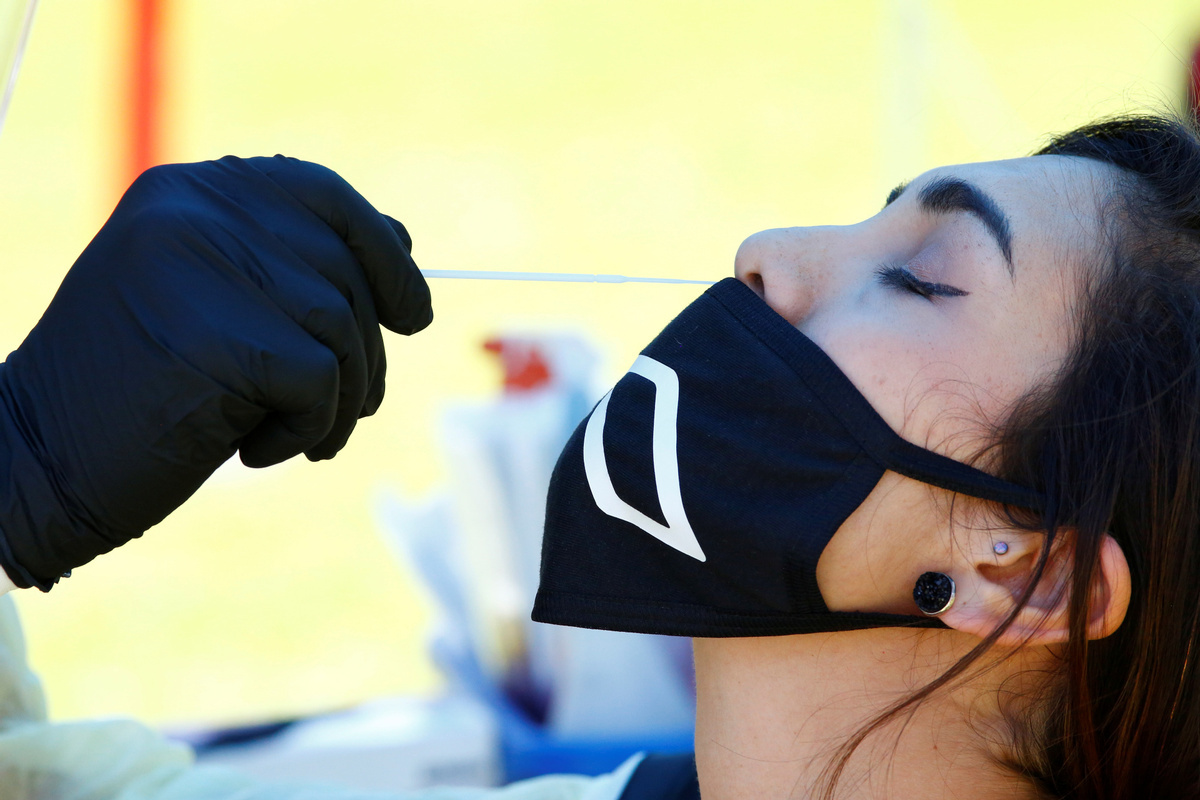 Nicollette Guerrero gets swabbed for a coronavirus disease (COVID-19) test at a testing site in Denver, Colorado, US, on June 20, 2020. (Photo: Agencies)

For an issue that has dominated the news for months, an increasing number of people in the United States say they have concerns over the quality of COVID-19 news reports－finding them to be exaggerated and partisan, making it harder to tell truth from falsehood. As a result, a survey finds, they are paying less attention to them.

Only three in 10 of the respondents said they trust US President Donald Trump and his administration to get the facts straight all or most of the time when talking about the coronavirus, the Pew Research Center said on Monday.

"I can't think of any precedent for that," said Dan Fagin, director of New York University's Science, Health and Environmental Reporting program, and a former reporter. "There's a reason why that number is so low. Honestly, what disturbs even more is that there is 30 percent of the public who think they can believe the president on this."

The survey also found evidence of a growing partisan divide in beliefs. For example, most of the Republicans polled (54 percent) said they believe most or all of the information provided by Trump, while only 9 percent of Democrats do.

The president, along with some other leaders, was criticized initially for not taking the threat seriously, for delivering misinformation about potential treatments and, even today, giving mixed messages on the need for masks and social distancing.

Even though Trump was a polarizing figure before the health crisis, he had a chance to get the public to rally behind him by offering solid, consistent information, said David Ropeik, a retired Harvard University professor.

A time of crisis

He cited former New York City mayor Rudolph Giuliani in the wake of the Sept 11, 2001, attacks as an example of a leader people rallied behind in a time of crisis.

"Trust is an intuitive sense of who we think is on our side, and that is why risk communication is really crucial in a time like this," Ropeik said. "That is why the federal government has blown this and many of the state governments haven't."

In the Pew survey, conducted among 9,654 randomly selected US adults between June 4 and 10, the respondents were asked a series of questions about their views on the pandemic and related news at the beginning of the outbreak and then three months later.

It found that ordinary people are getting tired of pandemic news: Nearly 85 percent of the respondents said they followed news of the coronavirus closely at the beginning of the outbreak, but 57 percent of them said they now spend less time doing so.

In addition, more people now believe that the COVID-19 situation is exaggerated. The share of respondents who said the outbreak "has been made a bigger deal than it really is" increased from 29 percent to 38 percent in the past three months.

The increase is particularly steep among Republicans: About 47 percent said so in late April, compared with 63 percent in early June. The share of Democrats who said the outbreak has been over-hyped increased only slightly, from 14 percent to 18 percent.

Nearly two out of three respondents said they had confidence in the information they were getting from the Centers for Disease Control and Prevention and other health organizations.

"What is encouraging is that people do have great faith in public health experts. That's why Anthony Fauci's role is so important and that it's a great blessing that he's been involved in all of this," said Fagin, referring to the director of the National Institute of Allergy and Infectious Disease.

Fagin said he believed Trump had the ability to turn things around if he sticks with the facts and models important behavior, such as wearing a mask in public and insisting on social distancing by his supporters.

"What opinion leaders do can make a big difference," he said.