A week before Thanksgiving, more than 100 residents were displaced Thursday by a wind-whipped wildfire that ravaged a remote mountain community in California and killed one person, authorities said. 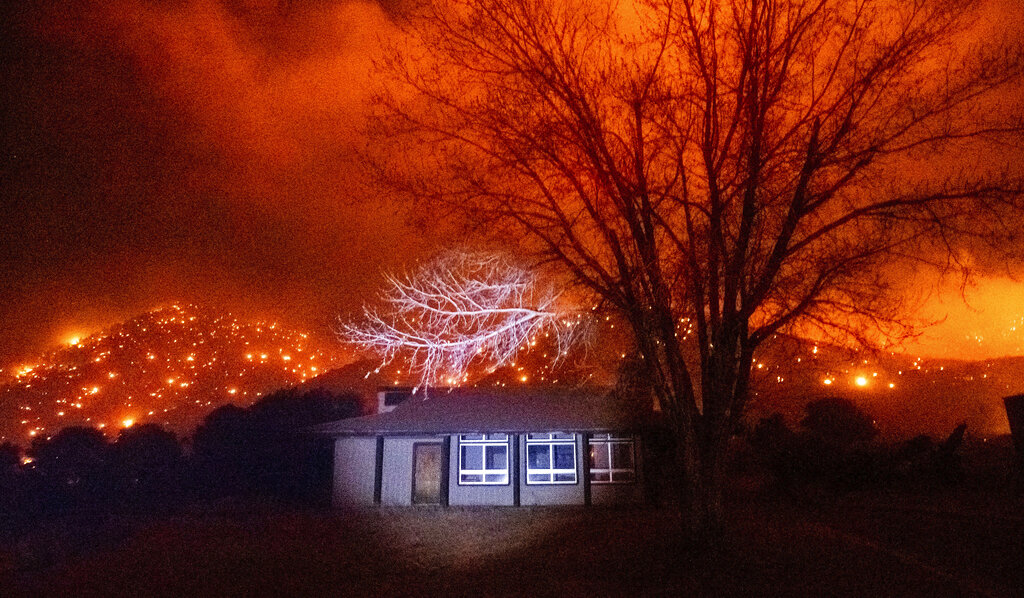 A car drives along Highway 395 as the Mountain View Fire tears through the Walker community in Mono County, Calif., on Tuesday, Nov. 17, 2020. (Photo: AP)

The inferno struck with sudden ferocity midday Tuesday during strong winds high in the eastern Sierra Nevada, destroying more than 80 structures, including homes, in the unincorporated town of Walker near the Nevada state line, according to the Mono County Sheriff's Office.

By early Wednesday, rain and snow were falling, reducing the fire to smoldering remnants after it scorched over 32 square miles (84 square kilometers).

By then, grave damage had been done to Walker, a community of widely spaced homes and businesses perched in a valley along a highway and the West Walker River, a six-hour drive north of Los Angeles. Homes and outbuildings were reduced to charred rubble. One person was dead, but authorities haven't released details yet.

The same ferocious winds, part of winter-like weather that blew into California and Nevada, also sent a wildfire roaring through a neighborhood about 100 miles (160 kilometers) north in Reno, Nevada. The flames forced more than 1,000 people to evacuate Tuesday — including the mayor — destroyed five houses and damaged 24. People began returning home Wednesday.

Though the fire burned a little less than 1 square mile (about 2 square kilometers), the damage there also was swift and then tempered by rain.

The parts of California and Nevada where the wildfires flared are experiencing drought. Numerous studies have linked bigger wildfires in America to climate change from the burning of coal, oil and gas, which has made parts of the U.S. West much drier and more flammable.

“Our first priority was life safety and evacuations as well as doing point protection to try to save as many residences as possible,” he said, describing “heavy structure loss” in Walker and nearby.

Residents fled Walker and the towns of Coleville and Topaz. The Carson Valley Inn to the north in Nevada was designated an evacuation point, and about 130 rooms are being used to house people for several days, the company said in an email.

The fire destroyed the home of firefighter Michael McCurry, his wife, Tess, and their four children, according to a GoFundMe page set up to help them.

“Rushing out the door with their fur babies, and only the clothes on their backs Tessa and the kids watched their home succumb to the inferno while Michael was actively fighting the fire. They have lost all of their worldly possessions,” the fundraising page said.

Local chambers of commerce were seeking donations to help those left homeless just a week before Thanksgiving.

The Mono County Sheriff’s Office said information on the person who died in the fire was expected to be released later Thursday.