WORLD More than 20 dead as Albania hunts for earthquake survivors

More than 20 dead as Albania hunts for earthquake survivors

Albanian rescuers searched rubble through the night looking for survivors trapped in buildings that toppled Tuesday in the strongest earthquake to hit the country in decades, with more than 20 dead and hundreds injured. 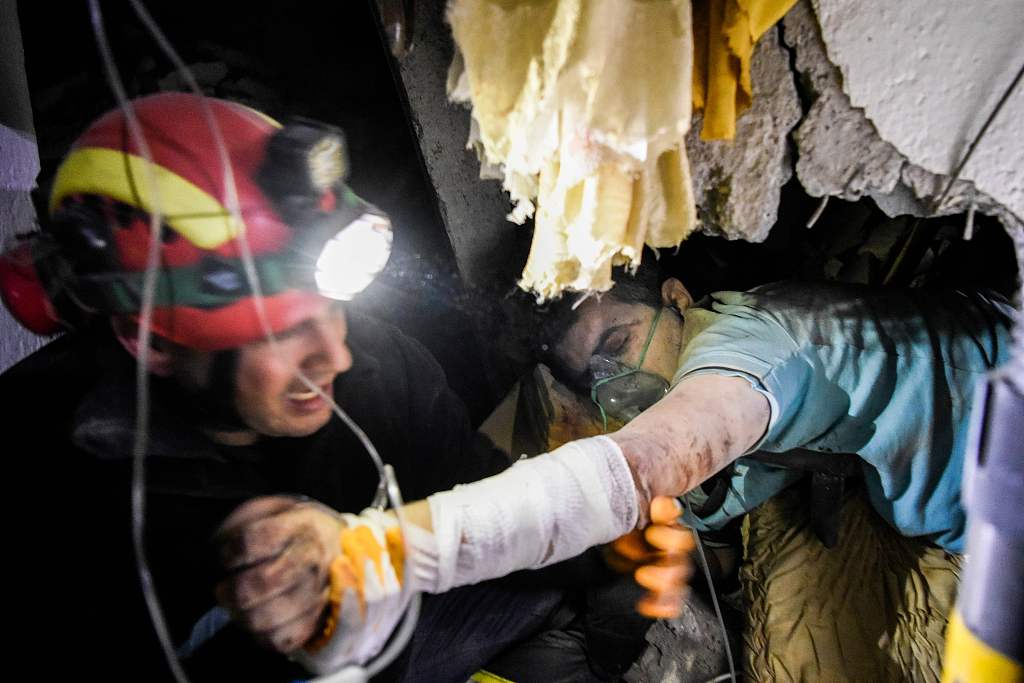 A firefighter tries to rescue a man stucked in the ruins of a collapsed building in Thumane, northwest of capital Tirana, after an earthquake hit Albania, on November 26, 2019. (Photo: VCG)

Teams of soldiers, police and emergency workers sifted through the debris of shredded apartment blocks and hotels in towns near Albania's northwest Adriatic coast, close to the epicentre of the 6.4 magnitude earthquake that rattled the country before dawn.

By evening the toll was 22 dead, according to the defence ministry.

Most were pulled from wreckage in the coastal city of Durres and Thumane, a town north of the capital Tirana.

In neighbouring Kurbin a man in his fifties died in the morning after jumping from his building in panic. Another perished in a car accident after the earthquake tore open parts of the road, the ministry said.

More than 40 people have also been retrieved alive in marathon rescue efforts that continued with headlamps and spotlights after the sun went down.

"We must be careful because the night makes any operation more difficult," she added.

Earlier in Thumane, locals watching emergency workers comb over a collapsed building shouted the names of their loved ones still inside: "Mira!", "Ariela!", "Selvije!".

Dulejman Kolaveri, a man in his 50s in Thumane, told AFP he feared his 70-year-old mother and six-year-old niece were trapped inside the five-storey apartment, because they lived on the top floor.

"I don't know if they are dead or alive. I'm afraid of their fate... only God knows," he said with trembling hands.

There were also brief bursts of joy during the day as rescuers delicately extracted survivors.

One thin, middle-aged man covered in a film of grey dust was seen being carried out of the rubble on a stretcher in Thumane.

In Durres, onlookers cheered "Bravo!" as a team used ropes to rescue a young man from the wreckage of a toppled seaside hotel in a two-hour operation.

Night in the stadium

Afraid to return home after a series of powerful aftershocks, hundreds of people in Durres took shelter for the night in tents set up in the city's football stadium.

The health ministry said that more than 600 people have received first aid for injuries, mostly minor.

During a visit to victims in a hospital in Tirana, Prime Minister Edi Rama told local media that Wednesday would be a national "day of mourning".

"We have lost human lives, we have also saved a lot of lives," he said.

Some 300 local soldiers and 1,900 police were sent to Durres and Thumane to assist with the rescue efforts, according to authorities.

Aid also poured in from around Europe, with teams from Italy, Greece and Romania among those deployed to help.

Felt across the Balkans

Albanian authorities described it as the most powerful in the last 20-30 years.

It struck at 3:54 am local time (0254 GMT), with an epicentre 34 kilometres (about 20 miles) northwest of Tirana, according to the European-Mediterranean Seismological Centre.

In Tirana, panicked residents ran out onto the streets and huddled together after the quake struck.

Several powerful aftershocks followed, including one of 5.3 magnitude.

The tremors were felt across the Balkans, from Sarajevo to Belgrade and the northern Serbian city of Novi Sad almost 700 kilometres away, according to reports in local media and on social networks.

The Balkan peninsula lies near the fault line of two large tectonic plates -- the African and Eurasian -- and earthquakes are frequent.

The movements of the small Adriatic micro-plate also produces earthquakes, according to Kresimir Kuk from the Croatian seismological institute.

The most devastating quake in recent times hit North Macedonia's capital Skopje in July 1963, killing around a thousand people and destroying some 80 percent of the city.