WORLD More turn to US food banks amid pandemic

More turn to US food banks amid pandemic 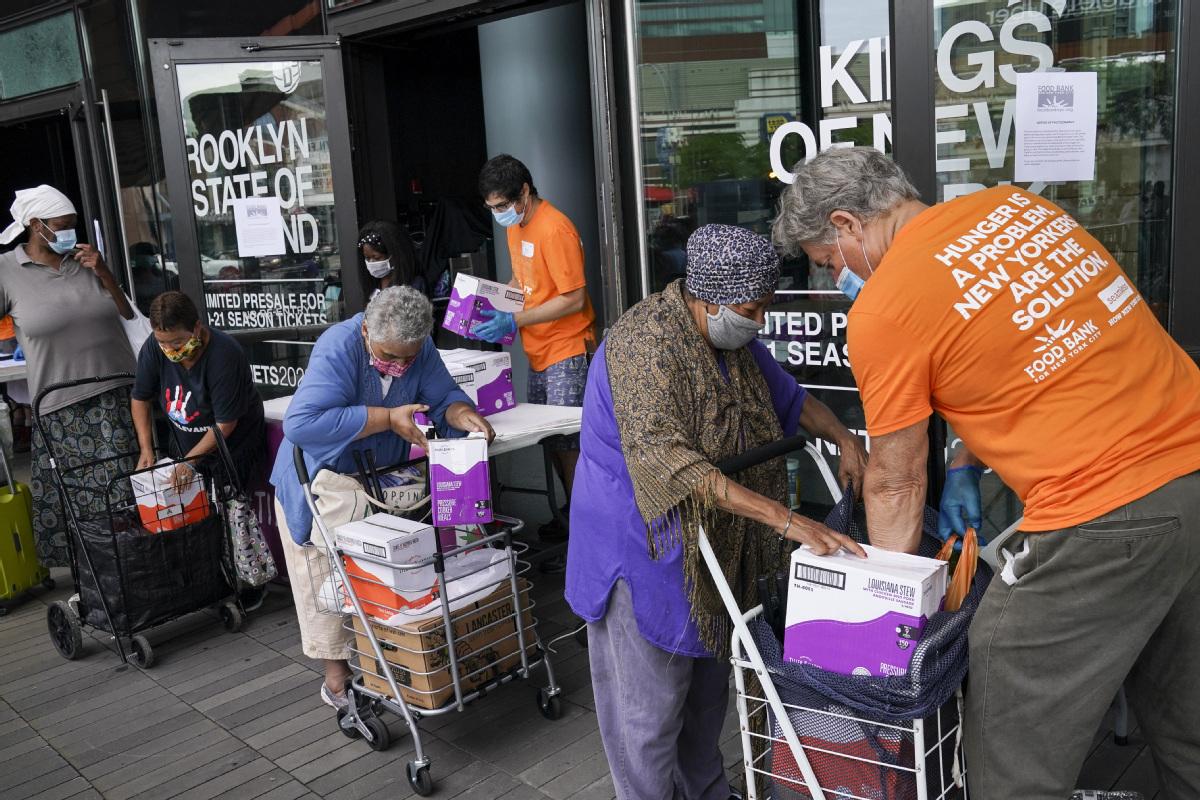 Pedestrians collect fresh produce and pantry items outside the Barclays Center in New York in September as part of food assistance programs amid the COVID-19 pandemic.(Photo: agencies)

Many US residents have been forced to turn to food banks after losing their jobs due to the coronavirus pandemic, leaving them struggling to feed themselves and their families.

Lazaro, a 62-year-old who lives with his wife, son and daughter-in-law in Mountain View, California, is battling cancer and lost his job due to the pandemic. He turned to the Second Harvest food bank in his state to get food.

"We had been struggling a lot since I got very sick and I was not able to work," Lazaro said. "I only get half of my (social security benefits) and it's not enough to pay rent, utilities and food."

Diane Baker Hayward, a spokesperson for Second Harvest of Silicon Valley, said: "Prior to the pandemic, we were already providing food to 250,000 people a month-more than ever before in our history.

"This high level of need was due in large part to the very high cost of housing in Santa Clara and San Mateo counties-what many refer to as Silicon Valley. When the pandemic hit, those numbers jumped to 500,000 people a month as many people lost their jobs or had hours cut at work. Many of the people we are seeing now have never received food assistance before."

Last year, more than 35 million people in the United States struggled to find food. This year, that number has nearly doubled, according to the US Department of Agriculture's September Household Survey.

Now at least 54 million people, including 18 million children, could struggle to have enough food to eat this year, according to Feeding America, the nation's largest domestic hunger-relief organization with 200 food banks and 60,000 food pantries that feed 40 million people.

"Hunger in this country existed long before COVID-19", Claire Babineaux-Fontenot, CEO of Feeding America, said in a statement, "but the pandemic has thrust more of our neighbors into food insecurity."

Since April, long lines have formed at food banks in states like California, New York and Texas. Those most impacted are seniors, families with children and ethnic groups, research shows.

Jennell Johnson from Los Angeles waited hours in her car to get donated food. "It's a blessing, it has helped me. It's tough but we're hanging in there. We're praying," she said.

Jen McLean, chief operating officer for City Harvest, said: "Even before the crisis, 2.5 million working-age New Yorkers were struggling to make ends meet, and one in five New York City children didn't know where their next meal was coming from ... In the coming weeks and months, many more will experience crippling financial hardship ... City Harvest ... is mobilized to feed families."

The Houston Food Bank in Texas, one of the largest in the US, has also seen a massive surge in demand.

COVID-19 led to 22.5 percent of households struggling for food from May 5 to July 21, according to research by Northwestern University's Institute for Policy Research. Black, Hispanic and Native American households had even higher rates.

Nationwide, more than 787,000 people filed unemployment claims in late October, figures from the US Department of Labor showed. Additionally, there has been a rise in new COVID-19 hospitalizations in 37 states.

The fallout from these issues has led food banks to see unprecedented demand that Second Harvest expects will continue for another 12 to 18 months.

Food banks buy discounted bulk food supplies from grocery stores, but have had to cope with food shortages this year. Farmers also donate produce to the organizations rather than throwing it away.

Hayward of Second Harvest said: "We provide about 55 pounds (25 kg) of nutritious food at each distribution. Because we are located in California, we have access to a variety of fresh fruits and vegetables, so we are known for handing out fresh produce, along with meats, eggs, dairy products as well as shelf stable products-our clients receive a variety of each at each distribution. We have distributions nearly every day throughout our service area."

Some food banks have been able to get fresh food from the USDA Farmers to Families food box program, but the program is set to run out on Oct 31.

Democratic and Republican lawmakers are working on a new coronavirus relief bill. Earlier this year, expanded unemployment benefits helped many households, but the support ended in July. The extension on benefits was then slashed but that too is set to end.

"We need our government to invest in hunger-relief measures today because families struggling with hunger need it now," according to a Feeding America statement.