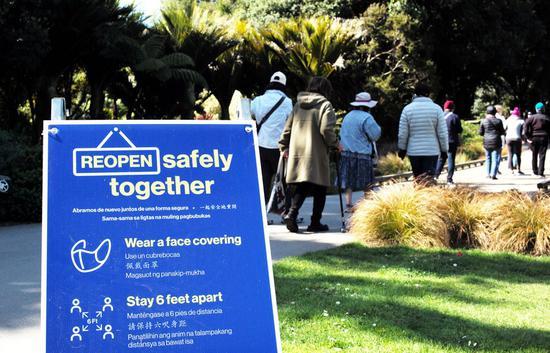 More U.S. states are on track to drop their mask mandates and fully reopen their economies despite warnings from officials and health experts to tread carefully until more people are vaccinated against COVID-19.

Maryland became the latest U.S. state to largely restart its economy as Governor Larry Hogan announced Tuesday that restaurants, retailers and other businesses would be allowed to reopen without capacity restrictions beginning Friday.

States including Texas, Mississippi, Connecticut, Arizona and Wyoming have unveiled similar plans in recent days, as the country is ramping up COVID-19 vaccination, and new cases and deaths are dropping.

Some states are easing restrictions gradually. Governors of New Jersey and New York announced Wednesday that New York City and New Jersey restaurants will be allowed to reopen at half capacity, up from 35 percent, beginning March 19.

Theme parks and stadiums in the U.S. state of California will reopen as early as April 1 with capacity restrictions and other safety modifications, local authorities announced last week.

Theme parks like Disneyland will only be allowed to admit only California residents at first, according to the state's department of health. Disney said Tuesday that it would need time to bring back and train furloughed employees, aiming to reopen in late April.

Theme parks including Disneyland and Universal Studios, two of the most visited tourist attractions in Southern California, have been closed since March last year amid coronavirus fears.

The states' decisions to loosen restrictions and reopen economies have defied warnings from top public health officials and experts who have been calling for strict measures to maintain progress in curbing the pandemic and guard against increasing variants infections.

"There is so much that's critical riding on the next two months," said Rochelle Walensky, head of the U.S. Centers for Disease Control and Prevention (CDC).

"How quickly we will vaccinate versus whether we will have another surge really relies on what happens in March and April," she said.

"The baseline level of coronavirus cases needs to fall further before the country can confidently resume normal activities, even as the vaccine rollout accelerates," said Anthony Fauci, the country's top infectious disease expert.

Fauci noted that in past periods of the pandemic, "when we started to pull back prematurely, we saw the rebound. We definitely don't want that to happen."

Experts are concerned that coronavirus variants may take hold and cause another surge in new cases and deaths if the public loosen caution and protective measures.

A total of 3,389 infection cases of coronavirus variants had been reported in the United States as of Tuesday, according to the CDC.

The vast majority of these cases, 3,283, were caused by the variant known as B.1.1.7, which was originally detected in Britain.

Modeling data suggest that B.1.1.7 could become the predominant variant in the United States in March.

The United States has recorded over 29.19 million cases with more than 530,000 related deaths as of Thursday afternoon, according to the real-time count kept by Johns Hopkins University.