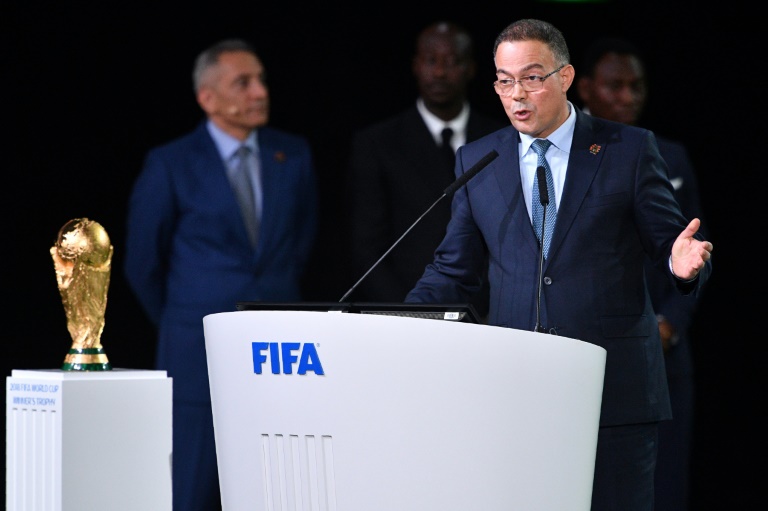 The president of the Moroccan Football Federation, Fouzi Lekjaa, presented the unsuccessful bid to host the 2026 World Cup in Moscow (Photo: AFP)

The award of the 2026 World Cup to North America on Wednesday was met with bitter disappointment in Morocco, after its fifth failed bid to host the tournament.

The joint ticket of the United States, Canada and Mexico won 134 votes, compared to 65 for Morocco, at a FIFA Congress in Moscow where this year's World Cup kicks off on Thursday.

In a tweet, Prime Minister Saad Eddine El Othmani saluted the "seriousness and professionalism" of Morocco's bid committee, which itself warmly congratulated the winners.

On the streets of Rabat, nearly deserted during the final days of the Muslim holy month of Ramadan, 49-year-old Abdelmula was less diplomatic.

"It was Africa's turn, but (the vote) was biased because Morocco is part of the Third World and the powerful may have conspired against it," he told AFP.

Said, 62, blamed the African kingdom's loss on US pressure.

"Unfortunately, we can't help it. Things turned political when President (Donald) Trump threatened those who were going to vote for us," he said.

During the bidding process, Trump had threatened that nations that did not support the North American bid should not expect US support on other issues.

If FIFA, world football's governing body, had been "impartial, it would have disqualified the North American bid after the threats from Donald Trump", said Driss Abis, a sports commentator and former coach.

While some on social media were outraged by Morocco's loss, others questioned its capacity to host the tournament.

"We must be realistic, we do not have the infrastructure it takes, our stadiums exist only on paper," said 28-year-old Sufyan.

Moroccans had held out hope until the last minute, with Wednesday morning newspaper headlines reading "Morocco believes it" and "Decisive day for the dream".

Even after the results were announced, the local press congratulated Morocco on its bid but said the outcome had come as a "cold shower".

"I was sad when the winner was announced," said former Moroccan footballer Abdelkrim El Hadrioui.

"At the same time, I wasn't surprised because Morocco went up against the American giant, which mobilised in recent weeks to influence voters," Hadrioui said.

And while the Arab League in April announced its support for Morocco's bid, seven Arab countries voted for the "United 2026" candidacy.

"God protect me from my friends, my enemies I can deal with," Moncef Belkhayat, an ex-sports minister and a member of the kingdom's bid committee, quipped before the vote.

Samira Sitail, head of public broadcaster M2, tweeted: "The United States has a new state. It is Arab and Muslim, easily exploitable, and it loves to put knives in friends' backs."

Morocco had hoped the location and geography of the kingdom, at the crossroads of Europe and Africa, would make it a strong candidate, as well as its passion for football.

But a FIFA task force deployed to rank potential venues had given Morocco an average mark of 2.7 out of 5, just above the required minimum of 2 for candidates.