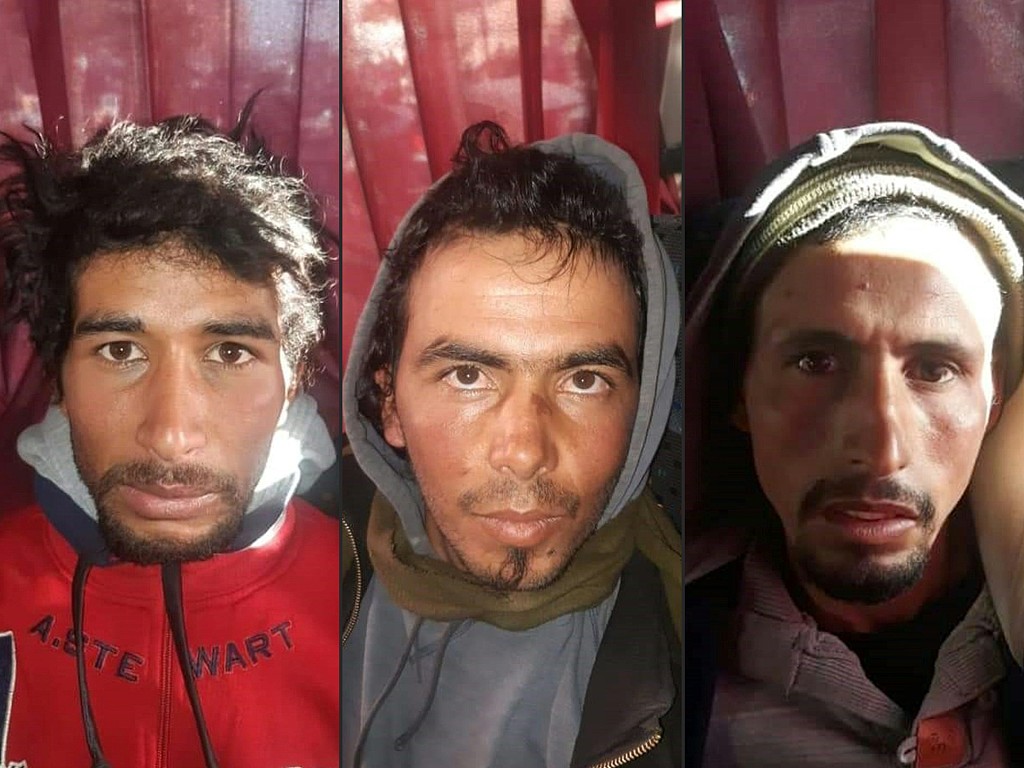 This combination of pictures created on December 20, 2018 shows Rachid Afatti (L), Ouziad Younes (C), and Ejjoud Abdessamad (R), the three suspects in the grisly murder of two Scandinavian hikers whose bodies were found at a camp in Morocco's High Atlas mountains. (Photo: VCG)

Moroccan investigators said Thursday they have arrested three fugitive suspects in the grisly murder of two Scandinavian hikers as they follow a link to Islamic extremism.

The arrests in the city of Marrakesh on Thursday morning follow a first arrest on Monday of a man suspected of belonging to an Islamic extremist group, hours after the discovery of the two women's bodies in the High Atlas mountains.

"The suspects have been arrested" and investigators are in the process of "verifying the terrorist motive, which is supported by the evidence and the findings of enquiries," a statement from Morocco's central judicial investigations office said.

The bodies of Danish student Louisa Vesterager Jespersen, 24, and 28-year-old Maren Ueland from Norway were found on Monday, after the women had pitched their tent at an isolated mountain site two hours walk from the tourist village of Imlil.

Moroccan police have focused on the terrorism line of inquiry since arresting the first suspect on Monday in a poor neighbourhood of the region's main city of Marrakesh, which is a magnet for foreign tourists.

"The radical Islamist line has not been removed, because of the profile of the (first) suspect arrested and the three" others, who have links to radical Islamic circles, a source close to the investigation told AFP on Wednesday.

Investigators released profiles of the three fugitives late on Wednesday as they launched an intensified manhunt.

In one of the black and white photos circulated by the authorities, one of the suspects wears long white clothing and a white skullcap, and has a long beard.

A second suspect also has a long beard, while the third has a thin face and a goatee.

All three hail from Marrakesh, and one of them had "a court record linked to terrorist acts", police spokesman Boubker Sabik said.

A source close to the investigation told AFP that "the arrests highlight the efficiency of the security forces".

Addressing reporters on Thursday morning, Rasmussen said "like the whole world, we react with consternation, disgust and a profound sadness."

Norway's Prime Minister Erna Solberg condemned what she called a "brutal and meaningless attack on innocents".

Authorities are still determining the authenticity of a grisly video posted on social media allegedly showing the murder of one of the women, an investigation source said.

The killings have sparked fears of a hit to Morocco's crucial tourist sector -- which accounts for 10 percent of national income -- as the kingdom's relative security has always been a major selling point.

"What most of us had feared - that is to say a terrorist angle to the double crime in the region of Imlil, has been confirmed," said leading news website Medias 24.

"Shock, sadness and revulsion are perceptible in Morocco," it added.

Traumatised by the murders, residents of Imlil are deeply fearful for their livelihoods, and have lent their help to investigators in identifying suspects, a tourism sector source told AFP.

Morocco has been spared jihadist attacks since 2011, when a bomb attack on a cafe in Marrakesh's famed Jamaa El Fna Square killed 17 people, most of them European tourists.

An attack in the financial capital Casablanca killed 33 people in 2003.